Blogging platform Medium has released a simple app for the iPhone that allows users to read articles from the site. They’re presented as a feed that’s recommended for you automatically, though articles that have been recommended by people you follow feature their mug shot next to the title.

The app does not, in its current incarnation, feature any writing or composition features — this is for reading things on Medium only, not creating them. 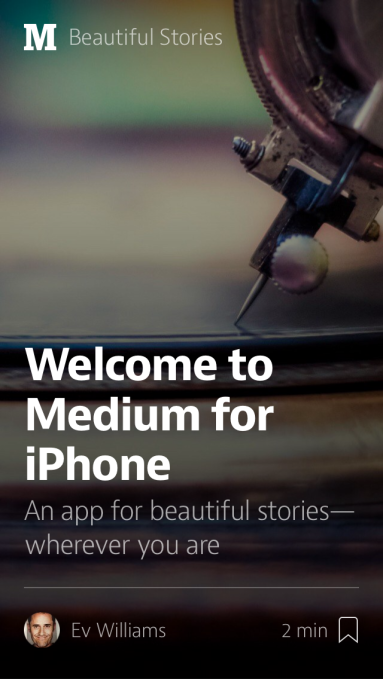 Twitter co-founder and Medium creator Ev Williams has posted an article about what the Medium app is about, and he says that, after consideration, the team decided to produce an app created just for reading.

“When we started working on this six months ago,” says Williams, “we debated a lot about the purpose of the app. Was it just for reading? Should you write on it? If just for reading, what would be better about it than just using the mobile web.”

The differences, says Williams, came in the details. Things that allowed them to make the articles display faster and that let them improve the layout. Things that made it “better than the web” in terms of reading experience. 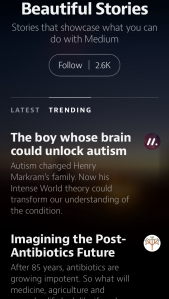 There is no index of your feed; you simply swipe to move backwards or forwards through articles. The app does include a simple feed of stories in a given Collection, however. Tapping on a collection name either at the top or bottom of an article will take you to this view. But that’s the only way to navigate around the various components of Medium. Otherwise the app is an exercise in restraint, presenting an extremely focused way to read, just read, Medium.

Tapping on an author will give you a similar list of just the stories they’ve written.

There will no doubt be a few folks who are confused by the lack of editing tools in the app — at least to start. But I think it’s admirable to focus on offering the best reading experience possible, rather than trying for a breadth of features done “just well enough.” It also speaks to the expressed desire of Williams and his team to move us away from “news bites” and toward pieces that consider things more deeply.

I did experience a couple of crashes within the first few minutes of using the app — especially when navigating to a category via the link at the bottom of a post. But hopefully those are just launch-day jitters.

Medium has garnered a bit of a reputation for harboring pieces that are … less than self-aware. And multiple times over the past few months, it has been host to this or that controversial take on life, the universe and everything. The alternative, though, is for it not to be talked about at all — so I think we know which one they’d choose.

Anyhow, Medium aficionados now have an iPhone app that reflects the clever and crisp design work done on the website itself — though it’s only for looking and liking, not writing. No word on an Android client.