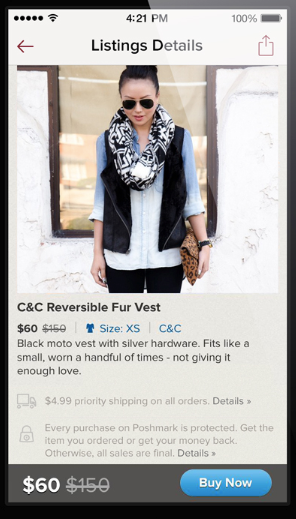 Poshmark, the mobile marketplace that lets women swap and sell items out of their own closets, is announcing a big partnership with the United States Postal Service. This marks one of the first times the USPS has worked with a mobile commerce startup to create a custom shipping label.

Similar to the way the USPS has partnered with both Amazon and eBay to create custom shipping plans and labels, the USPS has partnered with Poshmark to create PoshPost, a USPS shipping label designed specifically for fashion. With the introduction of the PoshPost label, Poshmark users can now ship any item of fashion under five pounds anywhere in the U.S. for $4.99. Poshmark says that 99.5 percent of orders placed on Poshmark weigh under five pounds.

Previously, Poshmark buyers would pay a range for shipping depending on the weight of the product, box etc. The new label offers a flat price for 2-3 day flat rate priority shipping.

This is a big deal for Poshmark. The USPS has only created custom shipping programs with larger e-commerce companies like Amazon and eBay. Perhaps that’s because Poshmark is starting to scale–the company fulfilled over 1.5 million orders in 2013, most of which were transacted over mobile devices.