The exit of engineer Julie Ann Horvath from programming network GitHub has sparked yet another conversation concerning women in technology and startups. Her claims that she faced a sexist internal culture at GitHub came as a surprise to some, given her former defense of the startup and her internal work at the company to promote women in technology.

In her initial tweets on her departure, Horvath did not provide extensive clarity on why she left the highly valued startup, or who created the conditions that led to her leaving and publicly repudiating the company.

Horvath has given TechCrunch her version of the events, a story that contains serious allegations towards GitHub, its internal policies, and its culture. The situation has greater import than a single person’s struggle: Horvath’s story is a tale of what many underrepresented groups feel and experience in the tech sector.

Horvath said she joined GitHub in 2012 when the company was “still pretty small” and its culture was supportive of the women on its staff. She said that at the time she was the only female designer or developer on the team. Despite GitHub’s generally female-friendly environment, Horvath claims: “I had a really hard time getting used to the culture, the aggressive communication on pull requests and how little the men I worked with respected and valued my opinion,” she wrote in an email to TechCrunch. 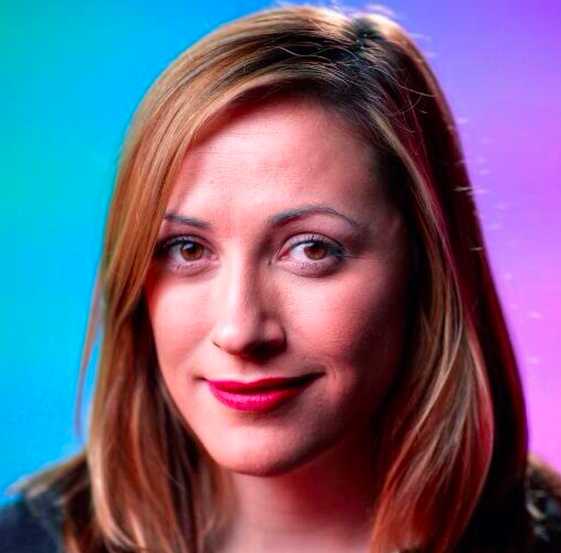 Why did Horvath work for GitHub? She “loved the idea of GitHub because it was the place people went to make things for people who make things.”

In light of that, Horvath told us that she “participated in the boys’ club upon joining,” but when her “character started being discussed in inappropriate places like on pull requests and issues,” the situation changed.

In short, Horvath said that she felt she was being treated differently internally simply due to her gender and not the quality of her work. She calls her colleagues’ response to her own work and the work of other female GitHub employees a “serious problem.” Despite GitHub hiring more female developers, Horvath said she struggled to feel welcome.

Adding to the already difficult situation was the wife of a founder whom she did not name in her email. Horvath says she did her best to distance herself from the founder’s wife, as well as the founder, for fear of being caught up in an unhealthy situation. But, as she told TechCrunch, she didn’t “move quickly enough.”

The wife of the founder asked Horvath out for drinks, which she agreed to. In her own words: “Of course I agreed, seeing as she was my boss’s wife and I’m always looking to meet women I can look up to.”

According to Horvath: “I met her and almost immediately the conversation that I thought was supposed to be casual turned into something very inappropriate. She began telling me about how she informs her husband’s decision-making at GitHub, how I better not leave GitHub and write something bad about them, and how she had been told by her husband that she should intervene with my relationship to be sure I was ‘made very happy’ so that I wouldn’t quit and say something nasty about her husband’s company because ‘he had worked so hard.'”

We are awaiting comment from GitHub regarding these allegations, and GitHub says it is looking into it. It’s not clear why this founder or his spouse appear to have felt threatened by Horvath’s employment.

In her email to TechCrunch, Horvath says she felt “confused and insulted to think that a woman who was not employed by my company was pulling the strings.” She also said she felt bullied by someone with perceived power and influence over her personal relationship and her career at GitHub.

In retrospect, Horvath said she feels like she should have handed in her resignation following the episode.

My only regret is not leaving or being fired sooner. What I endured as an employee of GitHub was unacceptable and went unnoticed by most.

Horvath then told her partner, also a GitHub employee, about what was happening. She warned him against being close to the founder and his wife, and asked him not to relay information to them. According to Horvath, her partner “agreed this was best.” He had talked with the founder’s wife, who agreed to give Horvath space.

Instead of the issue blowing over, Horvath received a meeting request from HR at GitHub, and was asked to “relay the details of that personal conversation that took place out of the office.” Horvath recalls that she was “uncomfortable with this but complied to the best of my ability.” Her partner was also asked to relay past events.

Radio silence ensued for a month, according to Horvath, while rumors cropped up that the founder was asking other employees about her, as well as her relationship with her partner. To Horvath, the silence made her think that she was “being bullied into leaving.”

At this point, Horvath said she began to feel threatened. She said that having her personal relationship dragged into her work life and put on show for her coworkers didn’t sit well with her. The aforementioned wife began a pattern of passive-aggressive behavior that included sitting close to Horvath to, as she told TechCrunch, “make a point of intimidating” her.

This stalemate ended when the founder asked to see her. Horvath said that she “wasn’t going to put myself in a position like that, so I required HR be present if we were to meet.” The meeting did not go well.

According to Horvath, the founder accused her of threatening his wife, who she had not interacted with or contacted since the wife asked her out to drinks. Horvath cried during the episode, as she said the founder both “chastised” her and called her a “liar.” Horvath said the founder ended the meeting by saying that it was “bad judgement” to date coworkers (referring to her relationship, which was with another employee at GitHub) and then left. Horvath recalls sitting there after his departure both “crying and shaking uncontrollably.”

We are waiting for comment from GitHub about these allegations.

Horvath later learned that the founder had a similar talk with her partner and demanded that he resign. Her partner is still at the company.

In Horvath’s view, her options were limited, given that “HR and the other founders had allowed this to happen, even after being made aware of his and her behavior.” It wasn’t clear whom she could turn to.

While the above was going on, Horvath had what she referred to as an awkward, almost aggressive encounter with another GitHub employee, who asked himself over to “talk,” and then professed his love, and “hesitated” when he was asked to leave. Horvath was in a committed relationship at the time, something this other employee was well aware of, according to Horvath.

The rejection of the other employee led to something of an internal battle at GitHub. According to Horvath, the engineer, “hurt from my rejection, started passive-aggressively ripping out my code from projects we had worked on together without so much as a ping or a comment. I even had to have a few of his commits reverted. I would work on something, go to bed, and wake up to find my work gone without any explanation.” The employee in question, according to Horvath, is both “well-liked at GitHub” and “popular in the community.”

His “behavior towards female employees,” according to Horvath, “especially those he sees as opportunities is disgusting.”

Seeking to create something positive out of the above complexity, Horvath decided to start Passion Projects, an initiative that she now claims “wasn’t just to fix tech,” but was also something designed to “fix GitHub and to strengthen the support network for women who might be experiencing similar things.”

Yet things failed to improve internally. Horvath calls the next period “uglier.” She says that the wife of the founder continued to show up at the office, sit next to her and “glare” at her for extended periods of time “as if trying to provoke a reaction.” After a spell, “spending a lot of time in the women’s bathroom crying,” Horvath spoke to a different founder who was “sympathetic” and promised to “address” the situation with the other founder and his wife.

The first founder asked to meet. Horvath accepted. The founder apologized, and admitted to having “inappropriately escalated the situation.” His wife, he said, would work from home from then on. The wife, to be clear, was not a GitHub employee.

Instead of getting gone, the wife appeared the next day and “planted herself right in front” of Horvath. Horvath pinged various executives who were “busy” but willing to help eventually.

The situation wasn’t merely passively painful; according to Horvath it became virulent:

The next thing I knew the wife was in my face at my work station verbally attacking me. She demanded to speak with me in private to which I said no. I asked her in a very calm way to leave me alone and told her she was making me uncomfortable. There is an eye-witness to this event.

I was shaking in horror and felt my adrenaline pumping harder than ever before. I was proud of myself for not reacting, though.

I decided to work from home for a while.

HR eventually asked the wife to not be on the same floor as Horvath. But according to Horvath’s recount, “she continued to find her way in and plant herself right next to wherever I was working.” This continued until her exit from the firm this past Thursday.

The final straw for Horvath came when she saw men gawking at women who were hula-hooping at the office. She called the episode “a really ugly and inappropriate scene.” Her words:

Two women, one of whom I work with and adore, and a friend of hers were hula hooping to some music. I didn’t have a problem with this. What I did have a problem with is the line of men sitting on one bench facing the hoopers and gawking at them. It looked like something out of a strip club. When I brought this up to male coworkers, they didn’t see a problem with it. But for me it felt unsafe and to be honest, really embarrassing. That was the moment I decided to finally leave GitHub.

Horvath told TechCrunch that she thought she “could fix GitHub.” She now claims that she was wrong. 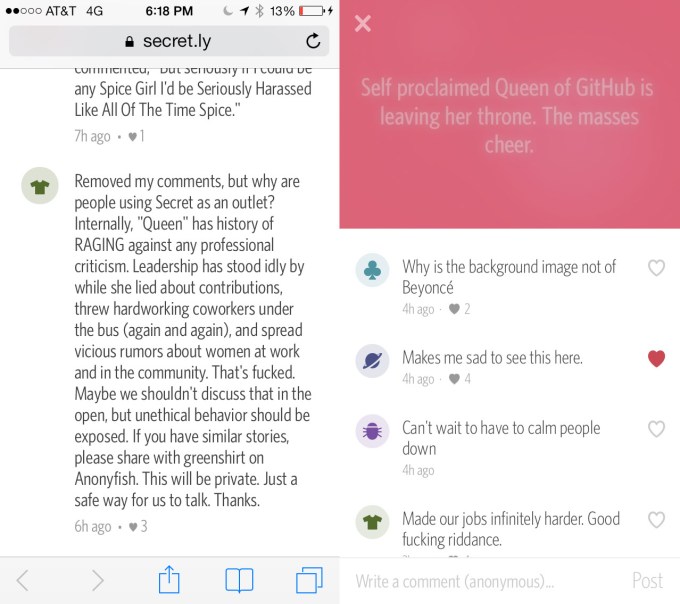 After working with HR to secure and announce a simple exit from the firm, someone posted a very unkind post to the Secret social network concerning her tenure. Her exit, at that time, was still confidential. She contacted Secret asking for the post to be removed. Horvath claims the post was not taken down initially. TechCrunch has confirmed with Secret that it was eventually removed.

The Secret post is what led Horvath to “speak up.” Instead of seeking attention, Horvath says she wants someone to be finally held accountable.

GitHub says it is investigating the matter: “We’re looking into this.”