CloudMagic, the makers of a personal search app which in February changed direction to become a search-focused email application instead, is out this morning with a significant update. The company is introducing a new feature called “cards,” which let you do more with your email messages, by allowing you to complete workflows in your inbox. These could include things like updating a helpdesk ticket, saving data to Salesforce, creating a note in Evernote, bookmarking a link in Pocket, and more.

The cards are accessible by double-tapping the email message while open, or single tapping on the small icon next to the sender’s name. 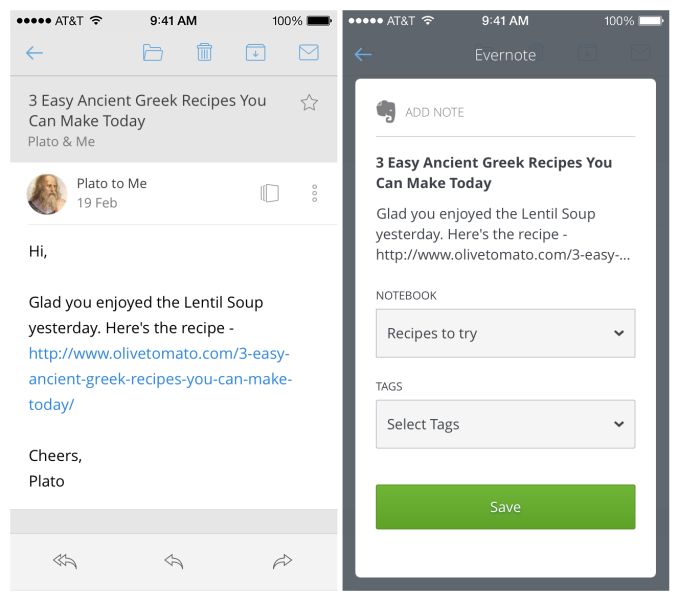 CloudMagic founder and CEO Rohit Nadhani explains that the idea for cards came about because email overlaps with a number of other categories and their related activities, including CRM, helpdesk, collaboration, marketing automation, HR, and accounting, for example. What he means is that email is often just the starting point for more work that needs to be done, and today, that work is something that’s difficult to do from a mobile device, because of its limited screen real estate, and the psychological overhead of having to switch from app to app.

Another email startup, Acompli, has a similar idea about integrating workflows right within its email application, but instead of starting with third-party integrations, it’s focused more on office basics, like your contacts, calendar, and files.

“The latest data says that 70% of emails are being read on mobile first and people check mobile email 40 times a day,” notes Nadhani. “On mobile, knowledge workers ‘live’ inside the email app. CloudMagic Cards will enable users to complete workflows without leaving the email app,” he says.

At launch, CloudMagic is making seven of its new cards live, including Sender Profile (a contact card similar to Rapportive), Evernote, Pocket, Trello, Salesforce, Zendesk, and MailChimp. More cards are in the works, and the company is also opening up its platform so any developer can surface their own cards, if they choose.

In terms of which cards CloudMagic will introduce itself next, Nadhani says that they’re taking a wait-and-see approach. “We will see which cards are taking off and then double down on that category,” he explains. “For example, if Salesforce is taking off, we’ll publish cards for SugarCRM, Microsoft Dynamics CRM, etc.”

The cards, both live and those yet to come, can tackle a number of use cases, whether that’s creating contacts or leads, turning emails into support tickets, creating tasks, saving text or linked articles for later reading, view the sender’s profile data, and more.

Eventually, the idea will be to charge for some of these cards, but Nadhani says that pricing is yet to be determined. The company will experiment with different pricing plans starting in the second quarter, however.

Though I personally miss CloudMagic’s earlier search utility, its email application has grown on me in the days since its launch. The company said it made the switch to email because it found, based on user logs, that 80% of CloudMagic users were using the service mainly to search their email inboxes, not their other cloud-connected services. That led the company to believe there was more opportunity in exploring how email itself could be improved, including not just with better search, but other activities, like today’s new cards.

Though Nadhani admits that not many users switched from search to email when the new app launched in November 2013, followed by the search app’s shutdown the following February. But the premise that what users really wanted is better email seems to hold true: the company is approaching half a million downloads for the mail app, with 125,000 weekly actives and 75,000 daily actives. The latter two figures are growing at 15% and 19%, respectively.

The Palo Alto-based startup was incubated and funded through Nadhani’s other company, Webyog, a maker of tools that help customers monitor and manage their databases. This has allowed CloudMagic to skip the seed stage funding rounds, and go straight for the Series A, which it will likely do this year.

The new application is available now for both iOS and Android.