ROIKOI is a very simple concept. At its core, it is a leaderboard that anonymously rates people you know based on one single criterion — “Would I hire this person at a job and work with them.”

The more I think about it, the more it seems to me that this is an excellent way to rate and quantify certain components of someone’s personality at a glance (obviously there’s a lot more to a full and accurate personality assessment and this is quite narrow…please don’t misunderstand me). But what I mean is, this one question is a fairly clear indicator of your feelings of trust toward an individual.

When a friend or acquaintance asks you for a referral for a job where you work, you have to think long and hard about whether you want to go that extra mile for them.

It is definitely one way to quickly quantify this person’s behavior.

To be clear, ROIKOI uses this concept for rating and decisioning, yet this web app (native app coming soon) has absolutely nothing to do with corporate HR or Linkedin or recruiting or ratings for job interviews or anything. No matter how obvious that may seem, it is not its intention at all. Instead, its intention is to create a very simple and clear leaderboard for an underserved community — a community of introverts.

In an online world of blatant self-promotionalism, where every person’s social footprint is potentially one of hyperbole, ROIKOI strives to create a mechanism for anti-self promotionalists to be recognized.

For example, your introverted, hardworking-genius-of-a-friend-who-always-gets-stuff-done-without-complaining, may be the last person to tell you how great they actually are. ROIKOI lets their reputation precede them and get them ranked. It’s the anti Klout in some way — the rating does not come from the direct social efforts of someone who is trying to become rated, but rather indirectly and anonymously from their reputation in the eyes of direct friends and colleagues.

How does it work specifically?

A user signs into the roikoi.com with their Facebook account (today its based on Facebook network…more networks to come in the future), and instantly people in their network begin showing up on the screen. You have three options to rate this person: Would I hire them? Would I fire them? Do I skip them because I’m not sure right now. 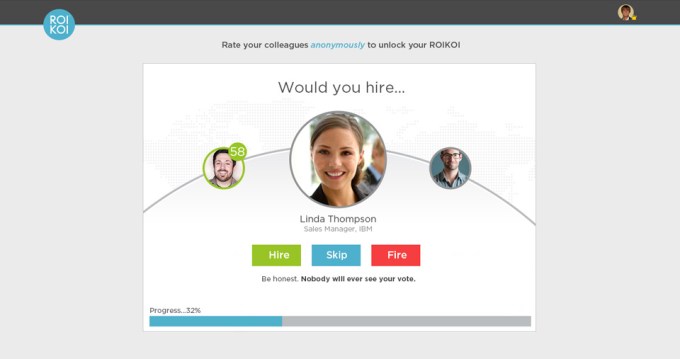 There’s a lot of authenticity in this approach that is palpable and the simplicity makes rating easy.

But let me come back to that part about using a “hiring/firing” motif for analysis, with absolutely no intention to work within HR environments. There could still be a lot of upside and potential there.

Despite this, CEO (and ex BazaarVoice employee #75) Andy Wolfe was very clear that integrating with Linkedin or Monster or other hiring sites is not the intention of ROIKOI right now. The intention is creating “authenticity through anonymity” and creating recognition for professional people who won’t ask for it, but deserve it. It’s really that simple.

So how will it become profitable?

Andy was also very clear that not all of that is known right now and that the first task is to build a solid platform that is fun, usable, and built for return users. If the network is solid and in place, good things will happen. If you build it they will come.

Not all investors would be cool with this level of uncertainty and Andy clearly outlined these unknowns to investors. Despite this, the team completed raising 1.45 MM this week though 15 angel investors.

With a staff of 4 full time employees, including Co-founder Ryan Stevens and Business development lead Sam Whiteside, along with about 10 or so other part time employees, they have the machine in motion to begin expanding this interesting concept. Since launch this week, ROIKOI already has over 100,000 ratings and three thousand users.