Dumbstruck, an Albany, NY based startup from Michael Tanski and Peter Allegretti, has a different take on video messaging.

The app allows you to capture moments in video and send them to specific contacts. When that contact opens your message, it shows the clip and records their reaction on the front facing camera. It then sends the reaction shot back to the person who sent the original message and plays them both simultaneously.

The company was founded in 2013 after the founders launched Dumbstruck out of their mobile app idea lab (Doctored Apps). They wanted to create a messaging app with a more intimate feel. 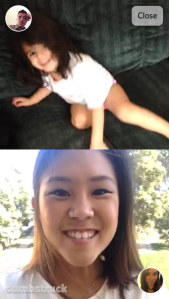 Head of strategy Joe Masciocco says, “The vision isn’t an app, the vision is to bring a more natural form of human interaction to the way we digitally communicate today. True emotional feedback and validation have been missing from our apps and devices, yet they are critical to our nature”. He likens it to Skype or Facetime, with the ability to save the reaction and relive it. He also offers some interesting use cases for Dumbstruck. For instance, “you just got engaged, take a picture of your new ring and actually watch your friends flip out when they see it!”

Dumbstruck isn’t really an app that I’ve been looking for, but truth be told, the experience is pretty fun. Particularly with friends with whom I want to share specific moments. Reactions have been both hilarious (my friends) and adorable (my girlfriend).

Masciocco says they’re focusing the rollout on the teen crowd but thinks Millennials could also find it interesting to capture and share life events. Eventually they plan to monetize using facial recognition to pull anonymized data from the user and sell that information to brands. For example, companies can get immediate, natural reactions to a new commercial from a targeted audience. Masciocco believes the real value is in the feedback.

They will also be hosting a contest at SXSW giving away $10k in AWS credits to a startup. Enter for that here, and check out the app here.