Anyone can create a self-portrait. Hell, we’ve been painting them since the Stone Age. But it’s the way you share them that can be special. Are selfies narcissistic? Sure. Can they be annoying? Yes, if done with too much arrogance, vanity, or frequency. But they’re not pointless. Selfies fill a void in face-to-face communication and context left by our shift from in-person conversation to online messaging via text.

It’s why a new reel of selfie apps have emerged. Despite cultural backlash against the selfie, the Justin Bieber-funded anti-bullying photo app Shots and stacked diptych creator Frontback are gaining traction. Both have a tough uphill road ahead, but Shots has crossed a half million registered users since launching in November, while Frontback has hit 800,000 downloads since August.

The desire the subtle emotions of the face is also why Snapchat has become such a popular messaging tool. You get to see someone’s expression along with what they’re saying. 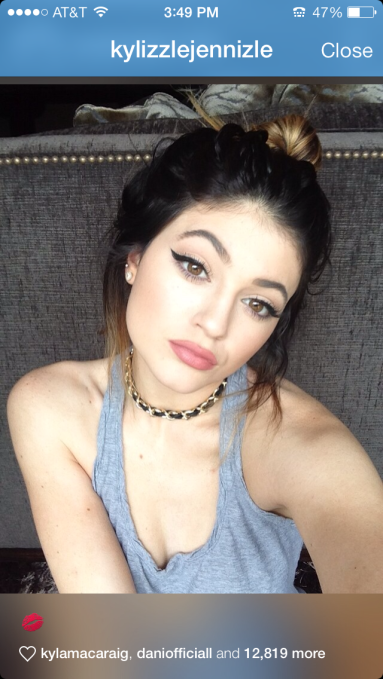 But if you post those expressions to a public forum, you make yourself vulnerable to bullying. Few people know this better than Justin Bieber. The post-teen pop star’s sugary songs are even more polarizing than selfies. The result is that he and his fans get a lot of hateful comments online. That’s why he put his own money into Shots. It’s basically an Instagram-style photo-sharing network that’s exclusively for selfies. The app takes a strong anti-cyberbullying stance by not allowing comments, only private messages.

Bieber hasn’t been speaking to the press recently, but agreed to talk with me about the app. He explains, “I know there’s been a lot of hype around Shots being my app but I want to clear something up – it’s not about me. My friends John and Sam have built a place where you can be yourself without any haters or drama. That’s why I am behind it. I hope others see how different it is and get behind it, too.”

With organic usagd by celebrities like Kylie Jenner and Snoop Dogg, promotional help from investors Floyd Mayweather and Bieber (wit his50 million Twitter followers), plus being featured amongst photo apps in the App Store, Shots has reached 260,000 monthly users. Seventy-eight percent of them are in the sought-after 13-to-24 age range, and 87 percent are female. To keep them happy, Shots has added a 3-2-1 countdown to allow hands-free selfies, and a yellow-tinted simulated front-facing flash to illuminate users while keeping their skin tone intact. 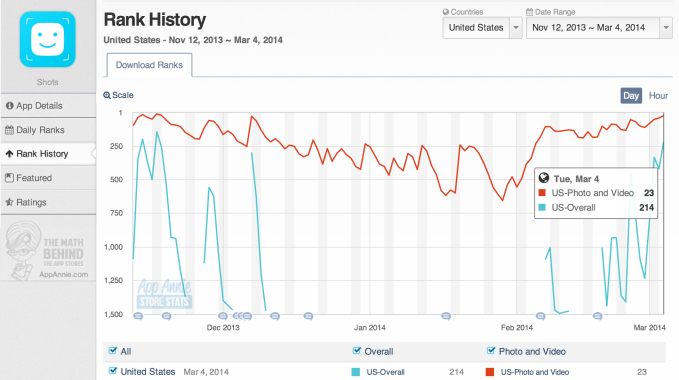 Shots co-founder John Shahidi admits “It’s not really massive quite yet. The older people are like ‘Uh, this thing is that stupid Bieber app,’ but those people aren’t our audience. I don’t really want adults on here. Everyone else is going after the masses. Our audience is the kids. I want fun people. The Shots social network is a positive place.”

Shots’ success or failure will depend on that community. Without any exclusive functionality, the only reason to post your selfies there instead of Facebook, Twitter, or Instagram is the hate-free environment. Without the landscapes and lattes, at least Shots demonstrates that photos are usually more interesting with people in them. 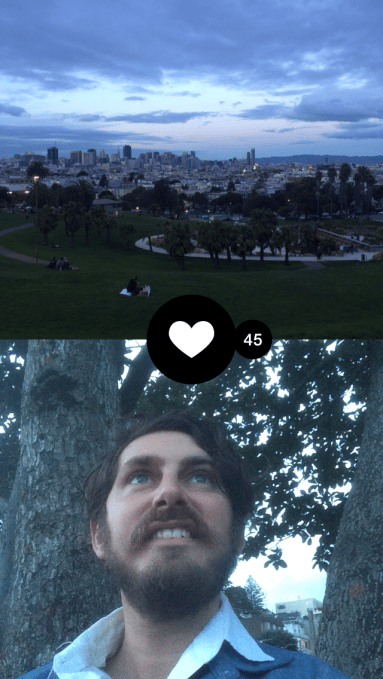 Frontback is taking a very different approach. It began as an app for simultaneously taking two photos — one of what you’re looking at, and one of you, which get stacked and shared as a diptych. You can’t easily create these without Frontback.

Co-founder Frederic della Faille tells me “We know we’re in the selfie world, but we feel a little bit different. We are visual storytelling and your face is the reaction. It’s not a selfie like ‘oh, look how beautiful I look’. It’s people who have a good moment with themselves. A constraining medium can be turned into creativity.”

For example, Japanese power user Himesora has turned herself into Frontback’s de facto mascot with a teddy-bearish costume she wears in her photos. You never even see her true selfie. Himesora’s ever-expanding legion of followers have started mimicking her posts by making their own paper cut-out eyes. Another Frontback star Tamkai rarely puts his own face in photos either. Instead he explores the stacked two-photo medium by transitioning from photograph to drawing across the divide. 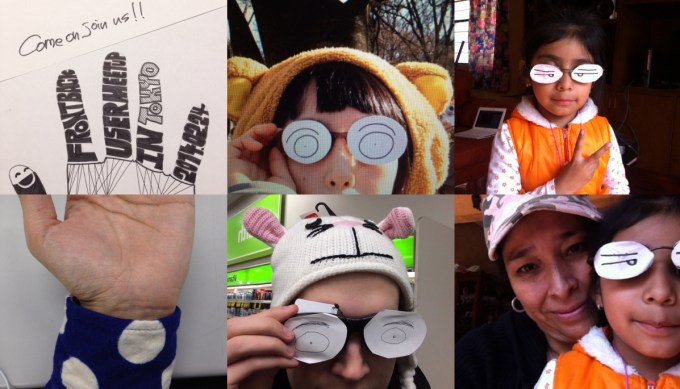 della Faille believes the future of Frontback isn’t just in faces, but art that captures before-and-after, inside-outside, or here-and-there. Taking a shot at Shots says “Do I think a network based solely on selfies can be relevant? I don’t know.”

Right now thanks to users pioneering the medium and being featured on the App Store home page in various countries, Frontback is seeing week-to-week growth accelerating 33 percent. It’s especially viral in Japan, where it’s growing 275 percent in total monthly users. della Faille is more concerned with engagement, though. Luckily, he tells me, Frontback’s daily active users create 2x as much content as Instagrammers. It saw 5 million photo views in January, and the average user is liking 20 posts per week. Active celebrities include Ashton Kutcher and Jack Dorsey…even though Frontback turned away Twitter’s interest in acquiring it. 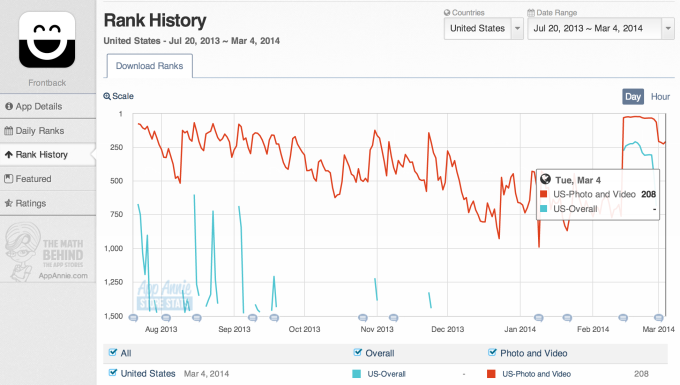 With Ellen’s star-studded Oscar selfie becoming the most retweeted photo of all time, the whole world is getting into the trend. But while creative expression and human connection are all well and good, becoming financially sustainable may be more difficult for these apps.

They’ll have to endure increasing competition from apps like Just.me (selfies with effects), Selfie.com (still unlaunched), Signals (selfies of babies), Weilos (weight-loss selfies), and React (a selfie messenger). And let’s not forget the desktop webcam-based selfie app (from before we called them selfies) DailyBooth failed and its founders were acqhired by Airbnb.

The odds are against Shots and Frontback. Neither sell any in-app purchases yet. To become real successes, they’ll either have to offer something people are willing to buy like stickers or filters that could pollute the purity of their photos, or get much more popular to sustain an advertising strategy.

Even then, they’re not building spaceships or curing cancer, educating the underprivileged or solving serious business problems. But in the end, most innovation is in the pursuit of happiness. Some startups do it by alleviating suffering, others by leaving a customer satisfied. Shots and Frontback want to share smiles. Whether you’re laughing with them or at them, perhaps they’re still accomplishing that goal.