Borro, an online platform that lets people borrow cash and put up luxury watches, art and other fine goods as collateral, is today announcing a new funding round of $112 million, coming entirely from one backer that focuses on finance investments, Victory Park Capital. Paul Aitken, Borro’s founder and CEO, tells me that the money will be used to continue to grow out its business in the markets where it is active — the UK and the U.S. — and specifically to expand the pool of money that Borro has available to offer for financing.

The funding comes on the back of strong growth at the company. In 2013, Borrow saw about $50 million of lending, Aitken told me in an interview. This year, it expects to lend $100 million. Last year’s revenues on those loans were $17 million; this year Borro expects “just over $30 million,” he says.

Prior to today’s round, Borro, which has been around since 2007, had raised just over $40 million from investors that include Canaan Partners, Eden Ventures, European Founders Fund, Augmentum and Ribbit Capital.

So how does Borro work?

The basic idea is, yes, rooted in the concept of a pawn shop, but then it is taken to a tech level: users who need cash and have valuable items in categories like fine art, jewellery, watches, precious metal, luxury cars and fine wine, which they can hold up as collateral, reach out to Borro via its website. Initial applications are made there, but then the next stage is taken offline. Borro has built up a network of object experts in different fields, along with a network of logistics experts, who come directly to a person to evaluate and collect an item, and to give the customer cash in return, typically at around 65%-70% of the value of the good.

As with a pawn shop, a customer then has a period of time in which he or she can pay back the money, plus interest. Typically an item is kept for about six months before money is returned to Borro, at an interest rate of between 3.5% and 4% on average. If the item doesn’t get collected in about 10 months, then Borro starts to look at liquidating. That can be through private direct sales, through dealers, or commonly at auction. 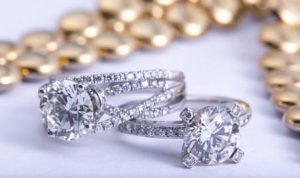 What’s interesting is that if it finds that an item then sells for more than the value for which it was consigned, Borro will return the difference to the customer. Aitken told me of such a recent case, when a piece of antique Harry Winston jewellery, consigned for around $100,000, eventually sold at auction for more than $300,000 — giving the original owner an unexpected boost. Sometimes the selling stage is also conducted online — “online, then offline, then online again,” is how Aitken describes it. “Not unlike Amazon when you think about it.”

As e-commerce continues to mature, we are starting to see people more willing to transact in larger and larger sums online, and Borro has been one benefactor of that trend.

“We’re seeing a lot more opportunities in the $50,000 loan plus range,” Aitken told me. “If you look back three years our average loan was couple of thousand dollars, but now it is $12,000. Bigger-ticket clients are coming in and using our services.”

Borro’s rise comes at a time when we are also seeing a number of other startups in the financing space — Lending Club perhaps being one of the best-known examples, but also from the likes of Square, which is reportedly working on a new initiative called Square Capital to provide loans to merchants with the option of paying the money back via transactions on the Square platform.

Some of the funding, Aitken tells me, will be to set up more extensive localised operations in the U.S., so that people can drop in to see the company more easily with their items. Right now, Borro has offices in London and New York, where it is co-headquartered; and future locations could include Los Angeles or Las Vegas (a city that is not a stranger to the pawnshop business model).

Why the turn to Victory Park Capital for this round? “VC firms aren’t typically funding loan books, and they don’t want to have their capital deployed into funding loans,” Aitken explains. Victory Park, on the other hand, has a track record in this area, investing in AvantCredit, Kabbage, ZestCash and Think Finance.

“We are very excited about the opportunity to partner with Borro, especially at this point in the company’s lifecycle as it continues into new geographical markets,” Brendan Carroll, Partner, Victory Park Capital said in a statement. “Paul has surrounded himself with an accomplished team and we look forward to helping Borro take its innovative business model to the next level.”

That next level, Aitken tells me, will also eventually include working with other e-commerce platforms and others who can either help sell goods or are conduits for consumers who are in need of a large cash sum. Given that Amazon has recently made a move into selling fine art, you can see how that strategy may start to find willing partners.