Slice Bookshelf, a social community for readers taking on Amazon-owned Goodreads by offering a more modern experience, and one that was less dependent on manual input from users, is shutting down. The company says that, going forward, it’s focusing on improvements to its core product, mobile shopping companion, Slice, instead.

The news comes on the heels of last summer’s significant raise of $23 million in new funding from Rakuten and others. At the time, the company explained its core mission involved “organizing all the commerce people have” – something that Slice does today, in part, by analyzing your email data for past purchases, then using that data to track spending and alert you to package shipments, product recalls, price changes and more.

With Bookshelf, Slice had experimented with using its proprietary inbox-scanning technology in a new vertical: instead of tracking your purchases in general, it specifically located your book and e-book receipts. Combined with data from Facebook, the service could automatically build your library, without the tedious data input competitor Goodreads still requires. 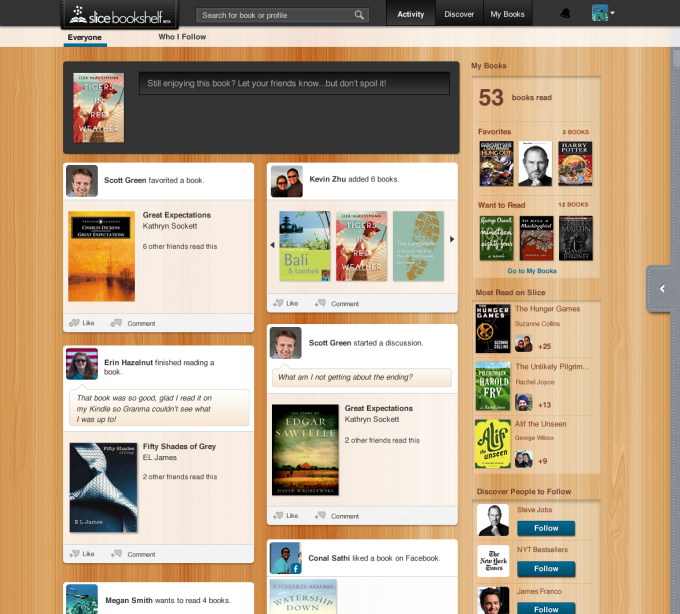 Unfortunately, Slice Bookshelf didn’t seem to have taken off. This could be because the company didn’t really prioritize work on the product. For example, over a year and a half after its public debut, it still lacked a native mobile counterpart, which made it difficult to use from your preferred digital e-book reader, like Amazon’s Kindle Fire, for instance.

Slice says that Bookshelf is closing on March 31, 2014, and users will have until April 30 to download their data from the service. You can export your data to a Goodreads format here.