The liberal wonderland of the San Francisco Bay Area has one of the highest concentrations of wealth in the country. Twitter’s IPO, alone, created an estimated 1,600 millionaires. But, are the local residents catching any of the dollar bills being shaken from the post-IPO money trees?

It’s been hard to decipher the broader impacts of technology on the average San Franciscan because heart string-tugging anecdotes have clouded the narrative. Critics of tech companies make headlines by protesting Google’s private buses and indirectly linking their existence with the surge in housing evictions. “There’s a war brewing in the streets of San Francisco,” wrote former San Francisco Mayor Willie Brown.

On the other hand, tech champions like to trot out small business owners who have benefited from re-locating tech HQ’s to blighted areas of the city’s historic Market district. So, to cut through the cherry-picked anecdotes, I asked San Francisco’s local economists what their take is and, as you’d imagine, they fall somewhere between the techno-utopian dreamspeak that you sometimes hear in the industry and the dire descriptions of the activists.

One thing is clear: they believe that the money flowing into SF is a good thing and is bolstering the local economy.

There is a “but” in the economic optimism, and it’s big enough to need two plane seats: skyrocketing rents are pricing many locals out of the city. Some have managed to fasten themselves to rent-controlled properties, but many have been forcibly evicted from their homes. On balance, tech money has built one of the sturdiest economic shelters from the ravages of recession, but those who get hit, well, they get hit hard.

“Our analysis suggests the tech sector is responsible for the vast majority of the economic growth in San Francisco since 2010,” said San Francisco’s Chief Economist, Ted Eagen. “In 2010-2012, the latest year we have complete data, local inflation has been 2.6%, while wages for all workers have increased by 4.5%.” About 2/3rds of those approximately 40,000 new jobs do not require a computer science degree or a closet full of expensive sneakers.

Partly thanks to the tech sector, the San Francisco Bay Area enjoys the 3rd lowest unemployment rate (4.8%) of California’s 58 counties. What accounts for this? Berkeley Economist Enrico Moretti argues that technologists have a special bond with the local economy.

“Anytime there is a job opening for a software engineer at Google In San Francisco, there’s an increase in the demand for local service workers,” he said. On average, Moretti says that every tech job creates five in other industries, as compared to just two from a manufacturing job. In part, because tech jobs just pay more there’s more disposable income to spend on maids, lawyers, and clothing.

“There must be someone who brings in the wealth,” said Moretti. Additionally, unlike the specialized needs of a manufacture, all the hair dresses, car washers, and tax pros that Google brings in for its workers are local. As a result, San Franciscans have seen their paychecks swell about 2x faster than inflation can eat it, (4.6% increase in wages vs. 2.6% inflation). From census data (below), San Francisco has fared slightly better than their surrounding California neighbors during the recession recovery.

“So outside of the tech industry, workers have benefitted from increased employment opportunities and rising real wages,” Eagan concludes.

However, it’s not all rainbows and sunshine. I spoke to one local clothing store owner whose story is a microcosm of all the city’s changes. The owner, who preferred to stay anonymous, resides on San Francisco’s Valencia St., the super-hip drag that has become the dividing line between the poverty-stricken Mission St. just a half-a-block East.

As chic restaurants with +$20 entrees began to swarm his business, it likewise brought with it new customers willing to shell out their ample recreational budgets on new forms of expensive Bay Area entertainment. “Burning Man, it’s like Christmas for me,” he jokes, referring to the drug-friendly arts festival held in the Nevada desert every Fall, especially popular among Googlers.

But, his long-time regular clients were forced to move into cheaper parts of the Bay. “Most of my customer, they drove away,” he notes with a hint of melancholy. Sky-high rents have eroded both his additional income, as well as the regulars that used to grace his store.

And, this is where the otherwise happy tale of tech money gets dark: housing prices.

Home Ownership As Housesitting For Rich People Not Yet Moved In

Technologists are fans of a non-zero sum world, but they have yet to discover an app that can physically expand San Francisco, seasteading notwithstanding. Scarcity in housing has led to a rent-hiking arms race.

San Francisco is burdened with the least affordable housing in the country. Just 14% of homes are affordable to the middle-class and two bedroom apartments are above $3,200 for families. According to real estate website, Redfin, San Francisco housing is more than 3x as pricey as it’s windy city peer to the East, Chicago ($177K vs. $599,000). 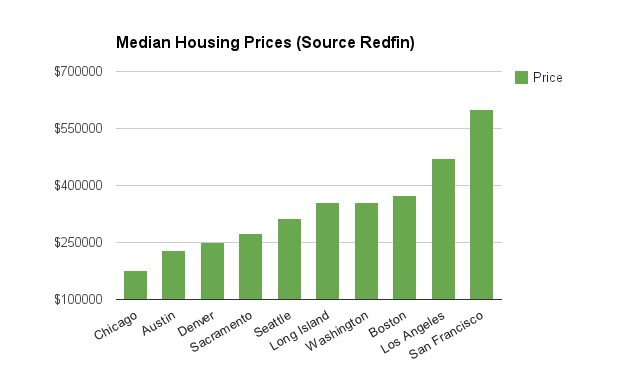 With sky-high purchasing prices and rents, housing costs are outstripping the pace of salary for some in San Francisco. “In 2012 average rents paid (as measured by the Census) grew over 7%, which is faster than the wage increases for most non-tech industries,” said Eagan.

However, “The vast majority of rental units in San Francisco are covered by rent control, so workers who did not move out of such units since 2010 will have seen wages growing much faster than their rents.”

Unfortunately, some landlords has found a way to evict long-time residents, and the resulting fight has made the tech industry the target. One local bookstore owner in the Mission District told me the rent hikes have challenged some of the good that the tech industry has brought.

“There’s less crime, which is good; rents are insane, which is very very very bad,” he said. Without rent control, he says, he wouldn’t be able to live in his current neighborhood.

Do We Need Affordable Housing Units?

The mayor is calling for more cheaper units reserved for struggling middle-class families making less than the $72,947 median income (yes, that’s the median income in San Francisco, FML). But, it’s unclear how many are needed, if at all, since government assistance begets bureaucracy, and city bureaucracy tends to slow things to a grinding halt.

Berkeley Economist Enrico Moretti tells me that increased housing supply does relieve rents in “every spectrum” of income. He observed that after Seattle significantly increased construction, rent hikes slowed even during a jobs boon that outpaced San Francisco’s.

Most importantly, the impact is linear, meaning that every single new house affects the price of every other house. The faster we build, the faster rent gets cheaper, and faster techies stop battling locals for coveted rent-controlled units. Unfortunately, there is no plausible economic model under which prices go down, and homes are already beyond the reach of 86% of middle-income families.

We love economists, but sometimes they discount the innumerable parts of life. San Francisco has a long history restricting housing to maintain the quaint Victorian look of the Bay.  “Do we want San Francisco to look like Hong Kong?” asks San Francisco State University Professor and former city planner, Jasper Rubin. He says that the city has never really tried to quantify the demand, but describes it as “tantamount to infinite.”

With enough housing to accommodate the hundreds of thousands of tech workers and wanna be entrepreneurs, San Francisco would be reshaped into a wall of skyscrapers. Indeed, the good folks at Firstcultural.com simulated what the South Bay’s sky-line would look like if it housed all of the major tech company’s workers. It’s Hong Kong-ish: 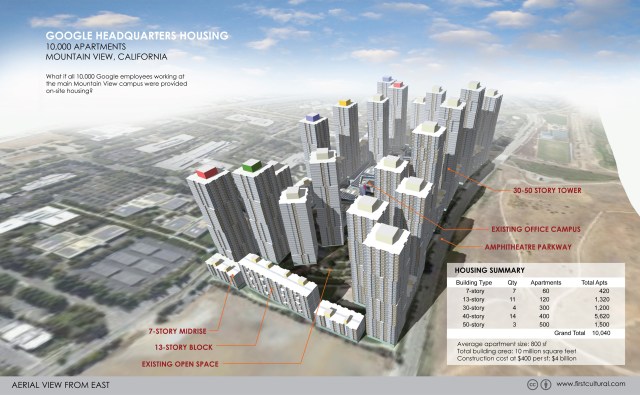 Thank A Techie, But Help The Needy

For most San Franciscans, tech’s presence has brought reprieve from a recession that ravaged the rest of the country. But, economists deal in averages; those who fall to the left of the distribution curve are subject to a game of capitalism Russian roulette, where their house and community are left to the whims of wealthier buyers.

The defenseless ought not be discounted in our praise of the tech sector, but we should also not forget that without their presence, San Francisco would likely be much worse off.