Today, alongside a fourth quarter earnings report in which it beat Wall Street estimates yet again, LinkedIn announced its intentions to acquire data-savvy job search startup, Bright.com, for $120 million. The deal, which was 70 percent stock and 30 percent cash the company said, will be completed during the first quarter of this year.

In a statement today, LinkedIn said that “several members of Bright’s team,” which now numbers over 50 –particularly those on its engineering and product teams — will be joining LinkedIn in the coming weeks. However, one notices that the announcement conspicuously leaves out any mention of Bright’s founders and whether or not they will be joining LinkedIn’s team in Mountain View.

Either way, what is clear is that, unfortunately for Bright.com users and loyalists, as a result of the acquisition, access to the startup’s job search products will continue until February 28th, at which point it LinkedIn will pull the plug.

Why did LinkedIn buy Bright, you ask, and whatever happened to that Monster.com fella? While we can’t answer for the latter, we do know that the Bright.com purchase is the latest in a fairly short string of acquisitions LinkedIn has made over the last two years. No Yahoo by any means, LinkedIn has been methodically and strategically picking off startups that will either help expand its growing professional content network or its talent solutions products.

It more or less began with LinkedIn’s acquisition of popular email-embedded contact management tool, Rapportive, for around $15 million in early 2012. Since then, as LinkedIn’s public-facing product has put more emphasis on facilitating content-sharing rather than contact-sharing, it’s picked up popular presentation, slideshow and document sharing network, SlideShare, for $119 million and made its big news reader play by snatching up Pulse for $90 million.

The Bright.com acquisition, at least in this context, appears to be a return to home base, and LinkedIn’s first acquisition of any product or startup operating on its home turf — i.e. the job search and professional networking market. As such, this could very likely have been a “defensive” play to acquire an increasingly popular “competitor” before it turned into a behemoth. 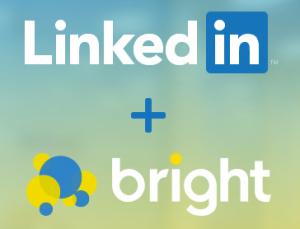 Granted, generally speaking, Bright.com has traditionally competed more with the old denizens of the job search space like CareerBuilder and Monster, allowing users and job seekers to search for jobs that match their interests. However, Bright’s core value proposition has been that it goes one step further than simply using keyword extraction and comparison to “match” candidates to the right jobs, instead using a magical combination of data science and machine learning algorithms to offer better matches.

Although, these days, I’m pretty sure everyone uses data science and intelligent algorithms for better matching — just ask Tinder. Though, to be fair, Bright also throws in a little Klout, ranking people by a “Bright score” which it uses to assess how strong the chemistry is between a user and a particular job.

It also takes into account historical hiring patterns into its matching, along with account location, a user’s past experience and synonyms. Essentially, it’s what Identified.com wanted to be before pivoting into recruiting.

By analyzing all of this additional info and using it to assign a Bright Score and to facilitate better matches, Bright has climbed its way into becoming the fourth largest job search platform, Leena wrote back in September. Not bad for three years of work.

As such, Bright was able to raise about $20 million in outside financing from Toba Capital, Passport Capital and a few others, and had signed on clients like Amazon, Samsung and Wells Fargo. When we last covered the recruiting platform, it had listed over 30 million jobs and was adding over 20,000 new job seekers every day.

As the algorithmic foil to its Talent Solutions, the Bright.com acquisition seems to make a lot of sense for LinkedIn, and it seems that these days any company who has the money will gladly pay $120 million just to get access to a new haul of data scientists.

For more, find Bright.com’s blog post on the announcement here. 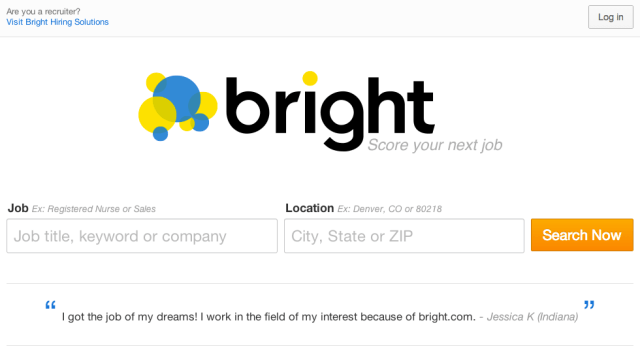