Dropbox is growing so fast it will soon run out of room at its San Francisco headquarters. That’s why it’s just signed a 12-year lease on a second office a 10-minute walk away at 333 Brannan to house spillover of its 500 employees, sources close to the company tell me. Kilroy Realty put out a press release bragging about leasing the space to Dropbox earlier today.

Back in 2012, Dropbox moved from an 11,000 square foot Mid-Market office into its current spot at 185 Berry St in the China Basin area of San Francisco’s South Park district. Originally that office was 87,000 square feet, but then Dropbox expanded to more of the building to occupy a total of 200,000 square feet.

When I visited the single-floor 185 Berry location a few years ago, it was practically empty. Dropbox had less than half the number of employees needed to fill it. With so much ground to cover, employees would often ride scooters and skateboard-like Ripsticks over its polished cement floors. There were lines of unfurnished meeting rooms, and a whole wing of the office was completely uninhabited. 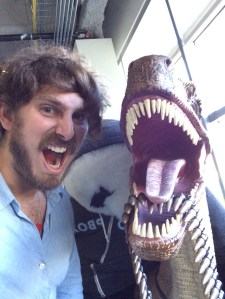 But when I went by for its latest enterprise press event in December, it was already starting to feel claustrophobic. With so many people walking around, wheeled-locomotion had become too dangerous to attempt. Every area was crammed full of desks as well as LED art, a jam room for musical instruments, and sculptures of its AK-47-toting velociraptor mascot (that I just had to take a selfie with). Dropbox said it added over 300 employees to the company in 2013, and it showed.

Then last month, Dropbox raised $250 million (with another $150 million possibly in the works), giving it a total of $500 million with which to fuel expansion into the enterprise. Selling to Fortune 500 companies requires a big sales force that likely wouldn’t fit in its current digs.

Sales could be one department housed in the new 333 Brannan location. However, sources close to the company say Dropbox hasn’t decided exactly what part or parts of the team will be booted from the headquarters into its nearby annex.

Dropbox will control all 187,000 square feet of the William McDonough-designed office still under construction at 333 Brannan. It’s a six-story brick and concrete building with the open floor plans preferred by startups, plus a rooftop garden and deck. It will feature a rainwater reclamation system that could cut water usage by 45 percent and energy usage by 26 percent. The location is about a 15-minute walk from BART and a 10-minute walk from Caltrain for employees commuting via public transportation.

Keeping its offices in the city might give Dropbox better luck in some areas of recruiting. Many tech giants choose to build massive campuses in the South Bay then run controversial shuttle buses back and forth from San Francisco so employees can live in the city. But Dropbox’s youthful company culture likely attracts people with little interest of living in social dead-zones like Mountain View and Menlo Park where Google and Facebook have their plots. This way, energetic Dropboxers can live and work in SF (if they’re willing to pay the rent).

By nearly doubling its total office space, Dropbox should have room to house at least another year or two of swift growth. And plenty of dinosaurs.