The defining characteristic of Snapchat — disappearing photos — has (inevitably) led to a swathe of third party apps that allow Snapchat users to save Snaps, rather than being forced to watch them fade away.

Although speedy Snapchat users can screengrab a Snap within the app its interface does tell the sender that their Snap has been saved. However third party hacks allow people to save Snaps without the sender being notified, and thus undermine the intimate sharing proposition that’s core to the whole service.

So, with that in mind, it’s interesting to note that some third party Snapchat photo-saver apps built for the Android platform have been taken down from Google’s Play Store. Call it the mystery of the suddenly disappearing Android Snapchat hacks.

According to an eagle-eyed tipster, Mountain View appears to have recently spring-cleaned a swathe of Snapchat hacks from its Play Store. “I noticed yesterday that almost all of the third party Snapchat apps were pulled from the app store. There used to be dozens of them, and today there are 2 or 3 left,” said the tipster.

One of the disappearing apps, Snapcapture for Snapchat posted an apology to users who had paid for its app on Facebook — along with a link where people can circumvent Play’s ban and download a build from its own servers.

The developer of the app, innovationZ, has set its email to auto respond with the following message:

Dear customer,
Google removed our application “SnapCapture for Snapchat” from the Play Store due to violation of the developer agreement. We are truly sorry to announce that we decided to stop any distribution and sale of “SnapCapture for Snapchat”.
Customers who already paid for the service can still access it by installing this update:http://innovationz.de/SnapCaptureNoRoot_support.apk

Another third party app the tipster spotted as being pulled from Google Play is SuperSnap for Snapchat.

A basic Google search for Snapchat apps pulls up various cached third party apps on Play — several of which now link to a Google ‘page not found’ notification when attempting to click through to the app, although others are still currently available on Play (such as Snapchat Save Pics). 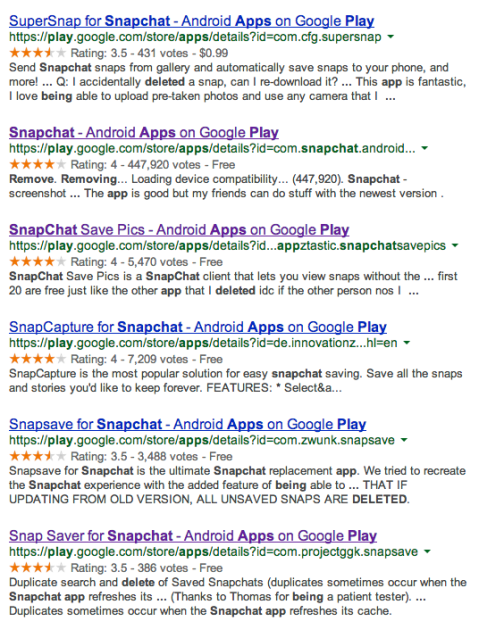 A quick search for Snapchat hacks on iOS appears to list the same usual suspects, so it doesn’t look as if iOS Snapchat hack app developers are feeling similar heat from Apple right now.

Rumours continue to swirl about which tech giant might like to pocket Snapchat, the ephemeral darling of the mobile messaging moment,  for multi-billions of dollars (if said rumours are to be believed).  Both Facebook and Google have been linked as potential Snapchat suitors — and Google’s apparent interest makes the removal of multiple Snapchat hacks from Play rather interesting.

At the time of writing Google had not responded to a request for comment on why it’s removed multiple third party Snapchat apps right now (but we’ll update this post with any statement).

“Both apps were online for about 6 months. During this time, the non-root version was download over 1.2 million times, around 500.000 snapchats were saved every day,” says Zeier. “At the moment, I keep up the support for all paid customers through Facebook (www.facebook.com/snapcaptureapp) while thinking about new distribution channels. As far as I know, the takedown affected only the biggest 3rd Part Snapchat clients so far, there are still quite a few unknown ones.”

“I personally feel that Snapchat is trying to ‘secure’ their service as much as possible right now due to the recent discussion because of the discovery security flaws with their API. This is obviously including the takedown of several 3rd party clients,” he adds, referring to a December data breach which saw 4.6M usernames leaking — and which Snapchat finally apologised for earlier this month.

“I am very unhappy how Google handled the situation. Both app were taken down without any warning while I was asleep.Because SnapCapture was relying on Google’s AuthUtils to get an auth token for my license server, the takedown rendered every single installation of SnapCapture useless as Google was not returning valid auth tokens any more. Furthermore I was not able to push an update bypassing this issue, so hundreds of thousands of users are really annoyed right now,” he adds.

You agree that you will not engage in any activity with the Market, including the development or distribution of Products, that interferes with, disrupts, damages, or accesses in an unauthorized manner the devices, servers, networks, or other properties or services of any third party including, but not limited to, Android users, Google or any mobile network operator. You may not use customer information obtained from the Market to sell or distribute Products outside of the Market.

It seems pretty hard to argue that an app designed to hack the functionality of another app could not be found to violate those terms. But the terms are broad so how they are being enforced is what’s interesting. Plenty of other apps on Play are probably violating those terms in some way but aren’t being actively targeted for removal by Google. Bottom line: Google’s Store, Google’s rules.

Or as one developer put it, commenting (via Facebook) on Snapcapture’s removal: “Wow that’s surprising they pulled that on you. There are millions of apps on Play that interact with servers in an ‘unauthorized’ way, that’s how a lot of unofficial clients work. I have an app very similar to Snapcapture so I guess it is only a matter of time until it shut down too.”

(A separate but equally interesting example of Google enforcing Play terms to eject something from its store is Cyanogen’s installer app — removed by its makers in November after Google said it was in violation of terms and would be ejected. That app was trying to popularise an alternative Android ROM — and thus compete with mainstream, Google-services-vehicle Android.)

A search for Snapchat on Google Play does still bring up some third party apps offering ways to sneakily save snaps, so Google’s motives for removing some of the hack apps remains unclear — or else a wider purge is still underway. 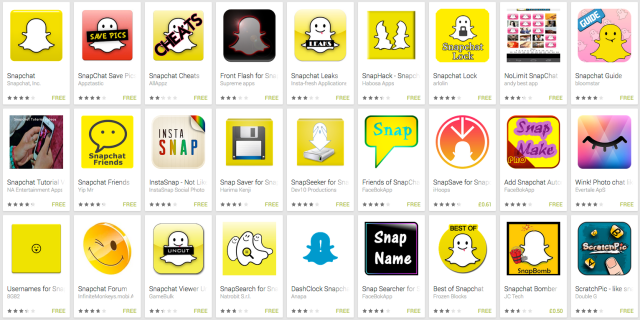 Or it could of course be pure coincidence that several Snapchat apps have been caught up in general Google Play T&Cs enforcement activities.

One more tidbit: the original tipster speculates that the apps being taken down are only those that reverse engineered the Snapchat API (although not fitting this pattern is Zeier’s root app, which has also been pulled).

“Apps that require root to save the pictures directly off the phone appear to still be up,” says the tipster. “so it does appear to be reverse engineered API apps that are getting pulled down. Apps that don’t reverse engineer the Snapchat API to save pictures (they save the cached ones on the phone) are still in the play store.”

So perhaps this is a sign of Snapchat doing a little springcleaning of its own.