Dash, a Techstars New York-backed startup that wants to be like a Fitbit for your car, has now launched. The product includes a combination of a hardware device and smartphone application which offers real-time feedback on your driving, trip logs, access to vehicle diagnostics (that pesky “check engine” light, and who can fix it!), a map showing where the cheapest gas is nearby, and even social features.

Like several of the “connected car” products on the market, Dash’s hardware involves an OBD device you can purchase from either within the Dash mobile application or the Dash homepage. The Dash software will also work with any Bluetooth-enabled OBD device, if you happen to already have one, or you can choose from two types of devices Dash’s homepage points to: generic devices found on Amazon for $10 and up, or a premium OBD LINK LX which is a steeper $69. 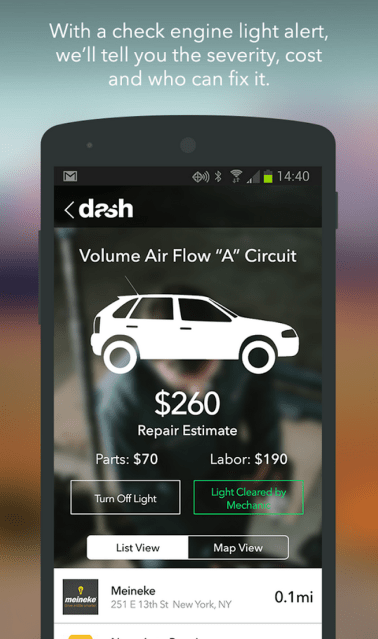 The Dash software works with either type of device, the company says. But the premium hardware offers a better build quality, power management capabilities, and connection reliability, among other things.

Once installed, the device connects via Bluetooth with your Android smartphone to communicate with the Dash app.

The app offers you a variety of helpful tools, both when you’re on the road and when you’re off. The app’s design is well done, too – very modern and clean, which is still somewhat of a surprise on Android, though that’s increasingly less of a case these days as developers begin to treat the platform with the respect its larger marketshare has earned.

As noted above, Dash offers a variety of “connected car” features, including the ability to track your trips, watch your gas consumption, find nearby gas prices, detect crashes and alert emergency services, understand the warning messages your car’s computer throws and even locate a reliable mechanic who can resolve the problem. Mechanics are ranked by proximity and star ratings, explains Dash co-founder and CEO Jamyn Edis.

Edis and Brian Langel both previously worked at HBO before starting Dash, where Edis was VP of R&D, which included tech strategy for HBO GO, and other skunkworks projects using augmented reality, video search, smart TV apps, Nike Fuel-like hardware for HBO Sports and more. Before that, he spent a decade at Accenture, working on large-scale technology projects and strategy for a variety of clients, including Sprint, British Telecom, Fox Interactive, MySpace, Warner Music, PlayStation and many more.

Meanwhile, Langel, now Dash CTO, had previously built the backend architecture for HBO GO, and worked on HBO Sports. He has also worked for Union Pacific Railroads and McGraw Hill. 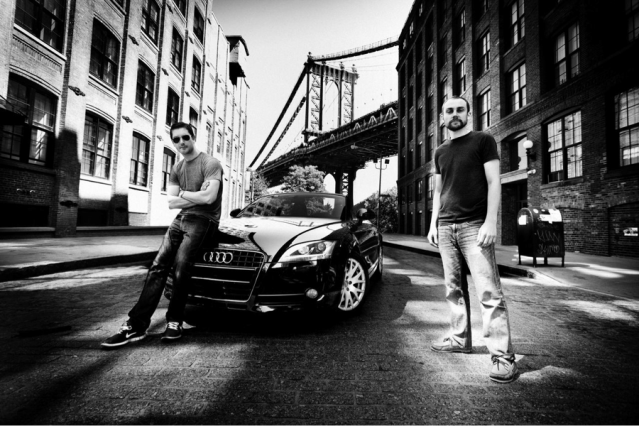 For a long time, the two had been looking to work on a project together around the idea of smart, connected devices. And when the company was founded back in June 2012, the landscape for connected car was fairly barren.

Today, that’s not necessarily the case.

“What’s different and fresh about our approach here is that we’re tackling cars as a platform – one that we think is really under-leveraged as a consumer technology,” explains Edis. Plus, he adds, “we’re technologists. We love data and we think we can improve our lives by using data, whether that’s physical fitness with Jawbone, or whether that’s home and HVAC using Nest.” With Dash, the improvement also includes a focus around safety and overall smarter driving. In the case of the former, while the app is in “in transit” mode, it will actively warn you through auditory alerts when something goes wrong (e.g warning you that you were breaking too hard, or other bad behaviors). But instead of just being an annoying robot “backseat driver,” Dash gamifies the experience, pitting you against friends or other nearby in a competition to earn the better “drive score.”

Meanwhile, similar to Prius, the app will inform you while driving of your fuel economy, allowing you to make adjustments in response.

Edis says that all this is just the beginning, too. The company is working on a bevy of other features, including targeted promotions that are based on your driving, location and other non-personally identifiable features, an iOS application, and partnerships around its developer API which would see Dash able to communicate with other smart devices, like those which Edis calls “trigger services” or other smart home platforms. 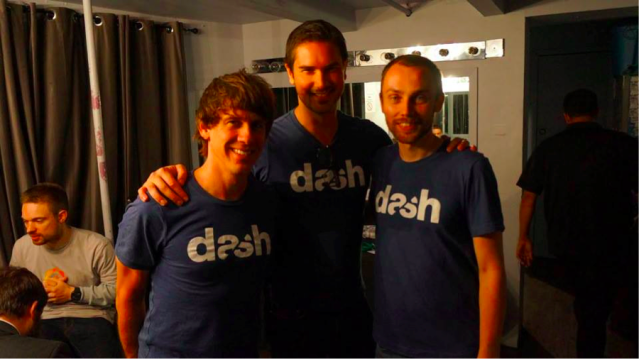 The seven-person New York-based company has raised an undisclosed seven-figure round of seed funding from Techstars, VCs (with car manufacturers as LPs), and angels including Foursquare co-founder and CEO Dennis Crowley, Makerbot co-founder and CEO Bre Pettis, Dave Morin, and others.

Dash now competes with a number of ODB apps and similar services in an ever-crowded market, including YC-backed Automatic (whose “Link” dongle is a bit pricier at $99.95), Carvoyant, CarMD, Torque, Car Doctor, and many others.

The Dash app is live on Google Play here.