As hinted at last month, salon-booking service StyleSeat has now closed on its Series A round of funding. Led by Lightspeed Ventures, the company has raised an additional $10.2 million in outside investment, bringing its total raise to date to $14 million. The funding will be used to both grow the platform and the now 35-person StyleSeat team, which will double in 2014.

Existing investor Lowercase Capital also participated in the round, along with Cowboy Ventures and Softtech.

StyleSeat has already seen a couple of notable new hires, with Andrew Dempsey, previously the Director of Business Intelligence at Netflix, now StyleSeat Senior Data Analyst, and Yulie Kim, former VP of Product at One Kings Lane, now StyleSeat VP of Product. According to StyleSeat co-founder and CEO Melody McCloskey, the company is also looking to staff up its data science and engineering teams, with a special emphasis on mobile, where they’ve hired five more engineers over the past month.

First launched in 2011, StyleSeat has grown from some 55,000 salons and spas using its online booking platform as of mid-2012 to now over 200,000 beauty professionals. On average, these pros are able to grow their revenues 68 percent within their first 15 months of being on the platform, StyleSeat claims. That growth is due not only to the increase that comes from making themselves available for online bookings, but also from the reach of the other marketing tools StyleSeat provides.

The freemium-based service charges for access to pro tools involving email marketing, advanced scheduling, reminders and more. The company has also been testing monetization efforts through on-site offers (ads), where it would take a 30 percent cut of the bookings. Both areas of the business are doing well, but the company doesn’t talk specifics when it comes to conversions or revenue. 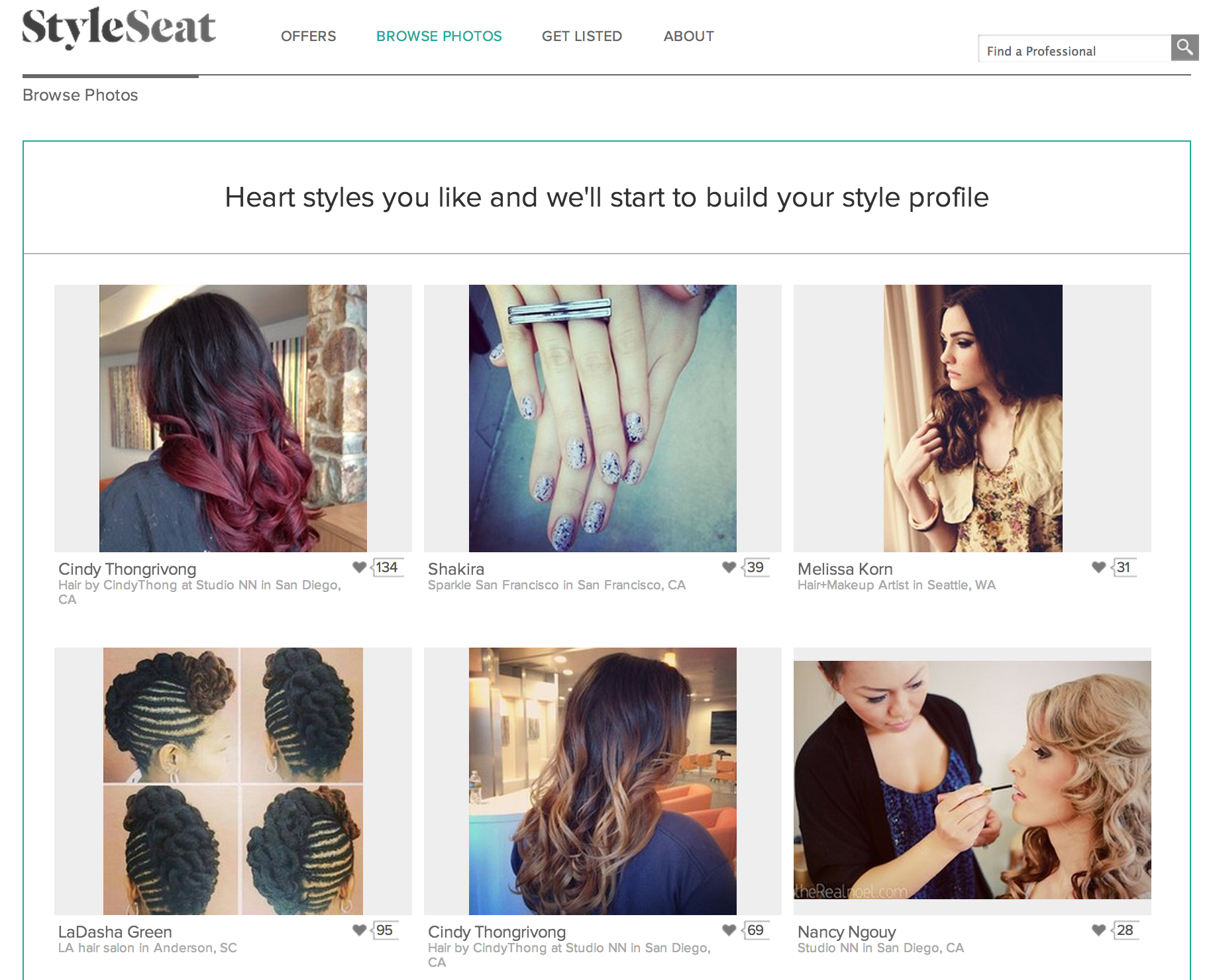 Consumers using the service today are able to search and browse StyleSeat to find stylists and other beauty professionals (e.g. waxing, nails, spa services, etc.), where they can check out their pro’s profile, view photos of their work, and then book an appointment when ready. Meanwhile, stylists are able to use the platform to manage appointments, client lists, their own profiles and photos, and now, thanks to the launch of the StyleSeat mobile app in December, they can even text or call their clients while on the go.

Since the debut of the iOS and Android mobile client, created in response to a rapidly growing mobile visitor base on the company’s website, bookings from mobile devices have grown by 16 percent. Today, 68 percent of StyleSeat usage comes from mobile.

Because the company built on mobile using AngularJS, they’re able to quickly roll out other features that consumers are demanding, including things like support for appointment rescheduling and appointment history, for example.

To date, the platform has booked over 5.5 million+ appointments for customers, up from 800,000 appointments as of June 2012, for comparison’s sake. Now, heading into 2014, StyleSeat will begin to focus more on the consumer side of the business, with plans to introduce more ways for clients to discover and book their appointments by tapping into mobile and the “on-demand” aspects that involves.

A new consumer-facing product feature in the works for a Q1 or Q2 launch is still being kept under wraps. But at a high level, McCloskey says there are things StyleSeat is working on for mobile that “people probably aren’t even thinking about, but have been part of the company I wanted to create for years.” (One can only hope this will include on-demand mani/pedis, right?)

With the new funding, the company is also gaining board member Justin Caldbeck of Lightspeed, who won the deal through sheer hustle, apparently. “We had a lot of interest [from investors], but I was politely declining meetings because we weren’t in that process yet,” explains McCloskey. Then Justin showed up unannounced at the office, with a request for just a minute of McCloskey’s time. She heard him out and was soon convinced.

“It was so clear to me his passion for my business,” she says. “I ended up having a couple of casual meetings with him and I was really impressed by his experience in the different marketplaces that he’s worked in.” Caldbeck has invested in Bloomreach, GrubHub, Sidecar, and TaskRabbit, to name a few. “He understands marketplace dynamics well and was really on board to build a big business,” McCloskey adds.

The company is also looking to fill an independent board seat, where the person would also have marketplace experience, preferably from an operations perspective.