Dropbox is raising between $250 million and $400 million at a $10 billion valuation according to the Wall Street Journal and Re / code. Why? Because Dropbox has spent the last year rebuilding its product to make it work for businesses, and now it’s time to sell that product. How? Because a source says Dropbox has been doing well and felt it had the buzz behind it to take advantage of an easy fundraising market.

The money could also fund poaching top talent from other tech giants and big acquisitions. But with more competition than ever, Dropbox needs to do a big enterprises sales push before potential customers jump into bed with Box, Google Drive, Microsoft SkyDrive, or Amazon WorkSpaces.

Dropbox built its name as a light-hearted consumer product. “Your files everywhere” was its motto, cutesy pencil drawings were its style, and its mascot? A dinosaur wielding an AK-47…riding a shark…with a bald eagle on its back. The company even has a statue of the T-Rex in its San Francisco office’s foyer. Notice the lack of anything in this branding that would give businesses the assurance that Dropbox is secure, scalable, and great for complex teams.

Yet in terms of becoming a techie-household name, its viral strategy worked. Handing out gigabytes of free storage for signing up friends let it grow quickly. By November 2012 it had 100 million users. A year later, it had doubled in size to 200 million. Plus the fun-loving culture helped it poach big names like Google’s Guido Van Rossum – the father of Python, and veteran Facebook designers Soleio Cuervo and Rasmus Andersson. 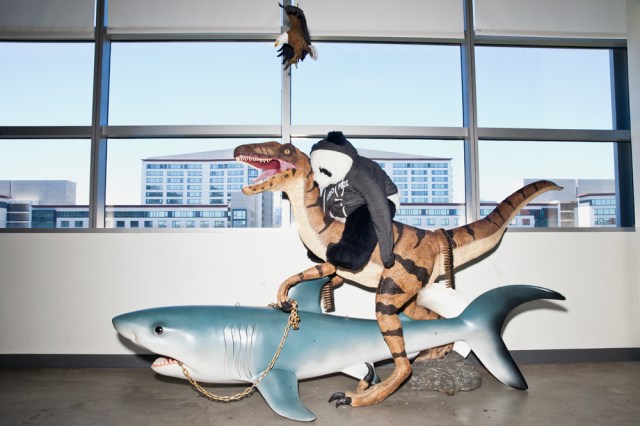 But Dropbox couldn’t shake its amateur reputation. A year ago, I’d hear businesses say the Dropbox didn’t have the permissions and security features it needed to make sure employees only had access to the right files and to watch who was downloading what.

Dropbox apparently heard those criticisms too. And it saw the heaps of money it could make in enterprise. For personal use, most people get enough gigabytes of space for free to satisfy their needs. If they wanted more for free, they could recruit friends and score storage bonuses. Few laymen need its $9.99 a month Pro plan with 100+ gigabytes of room. But at around $175 a year per enterprise user, Dropbox could quickly grow its bottom line.

So over a year ago, Dropbox embarked an ambitious quest to rebuild its product architecture. The goal was to enable users to simultaneously access their personal files as well as an overhauled version of its enterprise service from the same account.

In November 2013, co-founder and CEO Drew Houston unveiled the new Dropbox For Business. He highlighted dual-wielding of personal and professional files from the same account, powerful permissions controls, Sharing Audit Logs that detail what each employee is accessing, blocks for preventing unauthorized sharing, and options for transferring an employees files to someone new or wiping them from all their devices if they leave the company.

The beefed up Dropbox For Business product is rolling early this year. Its viral consumer strategy has given Dropbox a foot in the door with employees at companies around the world using it personally. But scoring huge enterprise installations with hundreds or thousands of $175 a year seats is still a war won with a sales army, and that takes capital to hire soldiers and generals.

Fundraising In A Frothy Market 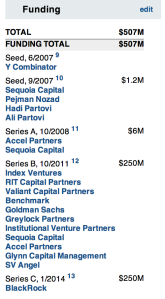 Lucky for Dropbox, right now the getting’s good. Spurred by massive, hundred million dollar-plus funding rounds for Pinterest, Uber, and its enterprise competitor Box, a source close to the company tells me Dropbox wanted to strike while the iron was hot. Facebook’s share price resurgence and Twitter’s blockbuster IPO have also contributed to a frothy market where it’s easy to raise big money for cheap at big valuations. The thinking is that this window could close eventually, and no fast-growing company wants to be left with a thin wallet when that happens.

The source tells me Dropbox’s strong momentum made the new $250 million to $400 million raise a lot easier. 2x year-over-year user growth; high-profile talent poaches; and interest in its enterprise potential all likely contributed the hype.

Dropbox has closed the $250 million investment led by BlackRock and featuring previous investors, according to The Wall Street Journal’s Douglas MacMillan. Re / code’s Liz Gannes says Dropbox may pull in another $100 million to $150 million from big mutual fund Fidelity and T. Rowe Price. The funding builds on the $250 million Dropbox raised in 2011 from Goldman Sachs, Sequioa Capital, Index Ventures, and Accel Partners.

The new financing will bring Dropbox to between $507 million and $657 million in total funding. 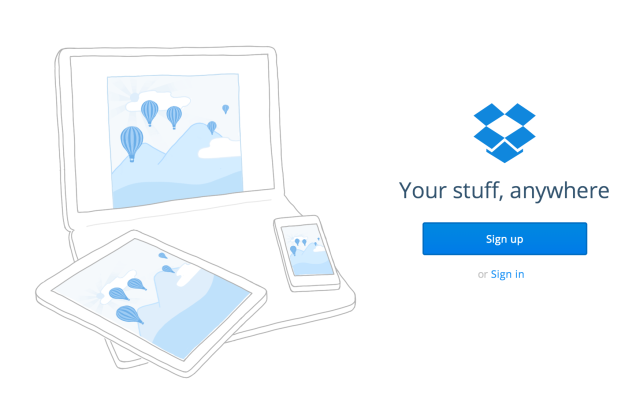 Now that Dropbox has plenty of cash and a product fit for enterprise, it can get serious about sales.

First, that means staffing up with proven sales execs. In late 2012 it poached Kevin Egan who built and led Salesforce’s sales team for the last 10 years. More recently, Dropbox has been beefing up its business development team, which could help it establish partnerships and integrations with other popular enterprise software products and mobile device makers. It just poached Henri Moissinac, Facebook’s director of mobile partnerships, and Tom Hsieh, who helped Spotify partner with a variety of companies. 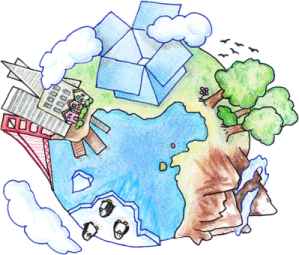 The funding could help Dropbox pay for these types of key hires, which can often require offering big compensation packages to get execs to leave cushy tech giant jobs. It could also fill out their teams with sales infantry. Dropbox expanded from 200 to 500 employees over the course of 2013, so it’s not scared to grow its head count.

With a deeper sales bench, Dropbox can focus on recruiting new enterprise clients. The company says that over 4 million businesses use Dropbox, though it’s not clear to what extent. Most companies on Dropbox’s customers page are on the smaller side. The real cash cows are huge company-wide installations with hundreds of subscriptions at Fortune 500 companies.

To win these clients Dropbox will have to beat Box and its charismatic leader Aaron Levie. Box cites only 200,000 business clients, but despite Levie’s penchant for punky red converse sneakers, his company has a reputation for the security and permissions features enterprises want. That’s how Box has signed big names like Procter and Gamble, Nationwide insurance, LinkedIn, and MTV. A quick glance at the home pages of Dropbox (above) and Box (below) say a lot about where their focus has been to date. 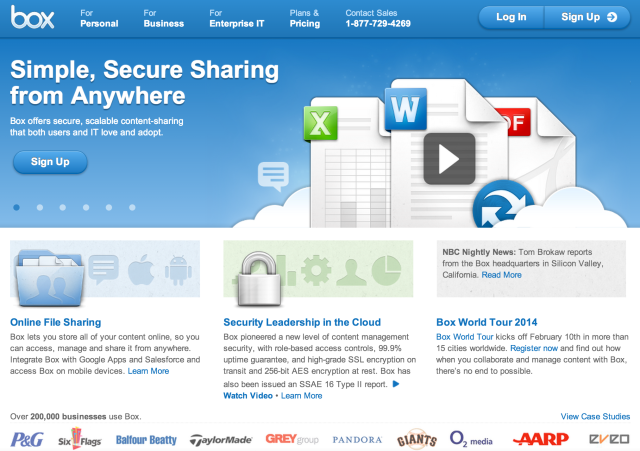 Dropbox will also have to fend off Google Drive, which benefits from its integrations with Google’s other enterprise offerings, SkyDrive which fits with businesses using Microsoft’s Office suite, and Amazon WorkSpaces with its affiliation with Amazon Web Services. Each of these companies’ empires give them an advantage over Dropbox’s independent platform.

Houston and his CTO Arash Ferdowsi will have to make up the gap with nimble product development and savvy marketing. They’ll also have to minimize outages like the one Dropbox suffered last week which scare away enterprises. 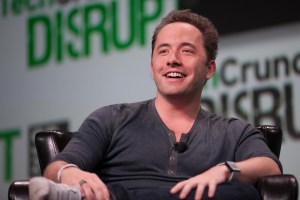 As more and more companies enter the big data age, and as media files continue to grow, enterprise cloud storage, sharing, and syncing is becoming of increasing interest to enterprises. Dropbox’s modern bottom-up distribution method gives it a beachhead, but it will still need money to finance traditional CIO wine-and-dining.

A few hundred million extra dollars could also help Dropbox buy more full-fledged products like its acquisition Mailbox, as well as smaller teams like Endorse, Snapjoy, and Sold that can bring special features or expertise to its staff. If Dropbox can identify holes in its enterprise product (one big one right now is synchronous collaboration) and fill them with acquisitions, it could be more appealing to prospective clients.

Last year, there was widespread speculation that Dropbox could IPO in 2014. But going public is a lengthy, clumsy process, and who knows whether the market will be as friendly by the time Houston and Ferdowsi might ring the bell in New York. With plenty of combatants vying for the increasingly-powerful enterprise storage throne and venture capital there for the taking, it makes sense for Dropbox to fill its war chest now.