When we began our planning we initially invited 15 finalists from 11 countries onto our TC Hardware Battlefield stage. One company couldn’t make it. They were PlayFresco, a team of engineers and hobbyists working on some amazing wireless motion interaction technology. Sadly, they couldn’t get a visa to the U.S., forcing them to drop out of our compeition.

Created by Feras Abed-Alhaq, Monier Aghbar, and Sudqey Dwikat, the system allows you to add motion control to any laptop without visible tracking hardware. Kids can use any round object as a steering wheel, for example, and you can wave things in front of the computer to use them as pointers. Like Leap Motion it can sense your hands in space next to and around a computer but unlike Leap it uses magnetic fields to sense objects and body parts. 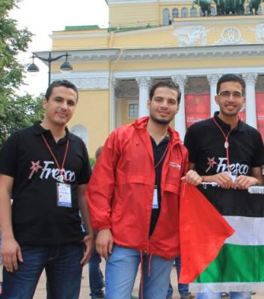 The company has secured $130,000 in funding from Michal Zalesak of the Czech ICT Alliance. Not surprisingly, it’s been a hard road for their startup, but things seem to be looking up.

“Unfortunately in Palstine electronics are really hard to get and the electronics and equipments that are available are really limited,” said Abed-Alhaq. “Our first prototype was made from paper and was huge and we made it literally from scratch.”

The group were inspired by watching children play with toys. Abed-Alhaq saw his little brother playing with a duct tape roll, pretending to drive a car.

“We did hundreds of experiments, hundreds of prototypes to do such a thing that could detect our bodies and how they move, and after we mastered this technology we thought that PlayFresco device can introduce a natural way to enjoy and play with what ever everyday object you hold in your hand,” he said.

The system sits underneath your table and senses your hands above with some accuracy. The team showed us their product in Europe a few months ago and they were ready to launch on stage at Hardware Battlefield. That’s been put on hold, but they’re still hard at work on the device.

“PlayFresco is a perfect example of true innovation with passionate and hard-working CEO, representing the emerging culture of new start-up Palestinian entrepreneurs, who focus on new technologies and business and don’t mix with politics in the region,” said lead funder Zalesak.

The team is working on a desktop system now but is planning a version for cellphones and tablets. They’re also looking into using Bluetooth to add motion control to almost any device. They didn’t make it to our stage this year but there’s always next year.