Twitter Co-Founder Biz Stone revealed his top-secret new startup Jelly, a mobile app that enables users to ask short questions of their social network through pictures. For instance, Stone snapped a photo of an art piece in San Francisco, asked his network what it was, and got a few dozen answers.

Since this morning’s announcement, there’s been a swirl of confusion and criticism about Jelly, especially because it seemed odd to limit an information utility to short questions within one’s own relatively small social network.

But, after speaking to Stone, it appears that Jelly has a much more unique and ambitious purpose than we’ve come to expect from web utilities. The primary goal of Jelly is to increase empathy, and is built more for the answerer than the asker.

“Using Jelly to help people is as much more important than using Jelly to search for help. If we’re successful, then we’re going to introduce into the daily muscle memory of smartphone users, everyone, that there’s this idea that there’s other people that need their help right now.

“Let’s make the world a more empathetic place by teaching that there’s other people around them that need help.”

To be sure, Jelly is still a utility. I successfully used it this morning to answer a math question: 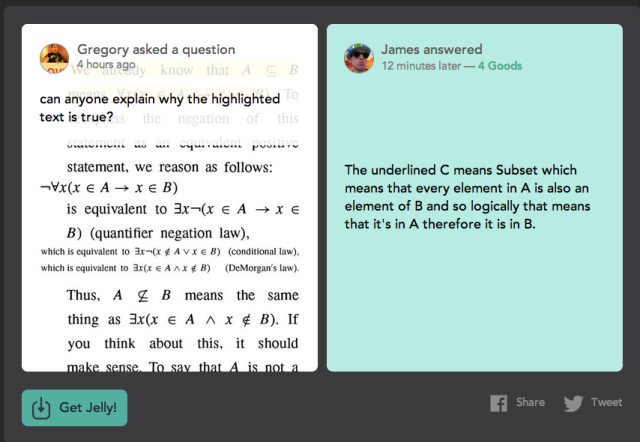 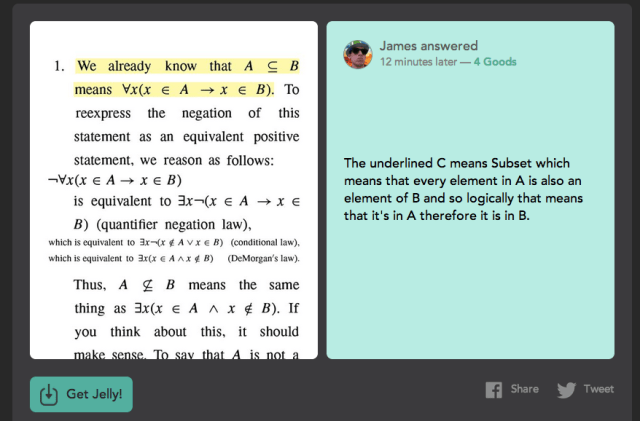 The same could apply to asking about what to wear, where to travel, or how to decorate one’s room. In one anecdote, COO Kevin Thau’s niece solicited some art advice for an acrylic painting, which eventually got forwarded all the way to the art director of a friend and director of TV’s House, Greg Yaitanes.

“That art director answered it brilliantly,” he gushes. “In what world does a 14-year-old girl in Florida get a professional answer from an art director?”

Success for Jelly is about creating a comprehensive question-and-answer network that users tap throughout the day, especially in their downtime, such as while waiting in line at the grocery store.

“All these people are working on artificial intelligence. How about just intelligence? There’s 7 billion people; there’s a lot of intelligence out there.”

But, the search engine seems almost instrumental. Biz’s stream-of-conscious explanation is worth quoting in full:

Beyond being a very useful search engine, like I said before, it creates this circle of empathy, where people realize that ‘Oh, there’s other people who need my help and I can actually help them and they’ll feel good about it and they’ll get trained to thinking about helping other people. And, maybe that’ll even jump outside of the app and just into the real world and they’ll start looking around and helping people and wouldn’t that be great?

With this, the format of Jelly makes more sense. Offering knowledge in an instant is the shortest path to helping. Jelly is explicitly discouraging discussions or any long-form back-and-forth. Just quick answers, a shot of personal dopamine, and off to the rest of the day.

Jelly is the first major application that I’m aware of to be built for the person helping, not the one seeking help. It’s this counterintuitive proposition that makes Jelly so intriguing. More importantly, Stone is no stranger to wild success. Few would have ever thought Twitter would become a staple of modern-day media.

Yes, Jelly is ambitious, but it’s being directed by someone who has the track record to actually make it happen. It’s new territory, and we’ll be following his grand experiment.

“We just kind of increase that global empathy quotient just a bit in our lifetime, and wouldn’t that be great?”