Mobile health tech startup Healint wants to make life better — and safer — for patients suffering from neurological conditions like strokes, epilepsy and migraines. Their first product, Android app JustShakeIt, is an emergency alert system triggered by shaking a smartphone. You can help its development by signing up for the app’s public beta test.

The startup has received early funding from JFDI.Asia’s accelerator program, as well as individual investors in India, Europe, Japan and Singapore. It is currently seeking pre-seed funding.

JustShakeIt is designed to let people who are at risk for strokes and other conditions send an alert to their caregivers by shaking their smartphones, which sends an SMS and email blast to designated recipients with the user’s real-time location. The company hopes to log at least 5,000 active usage hours on each of  the 10 Android smartphone models they are currently testing to maximize the app’s reliability. JustShakeIt completed its close beta testing round by 50 active users earlier this year.

The app uses Healint’s machine learning algorithms and data sourced from users to continuously improve the reliability of the app. Strokes can affect a person’s ability to speak, see and move, so JustShakeIt was designed to be operated with one hand. The app runs in the background and works without needing to unlock the smartphone.

The team’s tasks during public beta testing include ruling out movements that can accidentally trigger the app, so users can keep their smartphones in their pocket or bag without worrying about false alarms. Low battery consumption is also key; JustShakeIt is designed to run in the background, but use less power per day than the equivalent of a five-minute phone call.

The status of the public beta, with current test results for each Android smartphone, is currently available on Healint’s site. The startup says they are ranking which devices collect the most accurate data so they can recommend certain smartphones to patients.

Though its products will be available for users around the world, Healint is headquartered in Singapore because the country’s high smartphone penetration rate and rapidly increasing number of older residents gives the startup a good test market.

Healint’s team all have backgrounds in the pharmaceutical or med-tech industries. CEO and co-founder , is also the founder of Asia’s INSEAD Healthcare Alumni Network, a group for people in the pharmaceutical, med-tech and bio-tech industries. Veronica Chew, Healint’s CMO and co-founder, was a global project manager at GE Healthcare. Lead researcher Edouard Amouroux, is a data scientist who focuses on behavior modeling using Agent-based modeling methods, which help simulate social interactions.

For Cadiou, Healint’s mission is personal.

“My father had two strokes and we saw that there was a need to be able to make life simpler and safer for those types of patients and work better with doctors,” he tells me. The startup has collaborated with neurologists and neurosurgeons from hospitals in Singapore including Mount Elizabeth, Gleneagles, Raffles and Tan Tock Seng, as well as patients, to get product design feedback.

Healint uses sensors in smartphones instead of wearable tech devices because people are used to carrying a mobile phone with them everywhere, Cadiou explains.

“You cannot ask a patient with a neurological condition to wear a lot of sensors because that changes his behavior,” he says. “You have to find a way to measure the patient’s quality of life without changing his behavior massively. You have moments where they forget their Fitbit, for example, so you have a chunk of missing data, which is a huge problem in terms of data quality.”

Healint is currently developing tools that can help stroke, epilepsy and migraine patients keep track of their movements and warn them if their health is at risk. Before joining Healint, Amoroux worked on a project in France that made it possible to detect when Alzheimer’s patients needed extra care based on how they were consuming electricity in their homes. The startup hopes to create products that are just as easy to use for patients and caregivers.

For example, the startup is currently working on a tool that can “intelligently display all possible symptoms and warning signs before you have a migraine,” says Chew. “Neurologists sometimes give patients a paper diary but there are things that you can record and things that you can’t. You might remember that you slept five hours last night, but you can’t remember how much you slept last week. We’re looking for more intelligent ways to collect data for patients.” 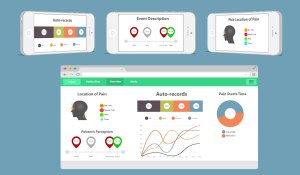 Other data that Healint’s migraine tool might track include the frequency of headaches during weather fluctuations or the efficiency of certain medications and treatments.

For caregivers, Healint’s tools can collect data that shows how active patients are or how much they sleep. Its founders say that balancing the privacy of users with their safety is a major goal. For example, tools focus on tracking movement, not location.

“For example, I know when my father wakes up, and I can see if he woke up, so I don’t worry. I can also see if he woke up during the night,” says Cadiou. “But you can choose who sees the information. We don’t want people to be pressured by relatives into giving too much information, so we don’t take too much.”