My least favorite part of Snapchat is mistakenly opening a video Snap when I can’t hear it, like in a noisy public place or when my sound is off. Snapchat tried to address that today with an experimental new Replay feature that lets you rewatch one old Snap per day. But by fixing that problem it created a much bigger one. It killed off some of its ephemerality.

A lot of the excitement and urgency of Snapchat stems from the fact that you only get one shot to look at a Snap. That means you have to pay close attention and be fully engaged.

But with Replay, you can be lazy. Once a day you can re-view a Snap a second time if you don’t close the app or get another Snap first. “Oh, that looked funny. Wow, they looked sexy. I’ll watch it again.”

It’s not quite the “forever” of Facebook’s Timeline, but suddenly I’m a bit more self-conscious of what I send. Did I line up the shot right? Does my stupid hair look ok?

A big draw of Snapchat was that once someone had viewed your Snap, it only lived on in their imperfect memory. That made sending them carefree and lightweight — something I’d do without second guessing what could happen. That encouraged the silly and racy behavior Snapchat thrives on, and set it apart from other photo sharing services that create a permanent record you have to worry about.

Now whoever I send a Snap to can verify their first impression, show it to someone else, or get a second camera or phone out and secretly screenshot it. This makes sexting with Snapchat a lot more risky. Who wants to flash their jubblies if they have to worry they’ll get replayed in front of a crowd or a camera? 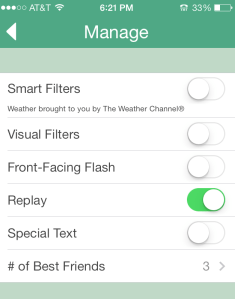 There are certainly times when the Replay feature could come in handy, but the whole feature is poorly designed right now. There’s no explanation of how it works, you have to enable it in the buried Manage Additional Services menu, and then it’s not at all intuitive that turning it on means you can replay Snaps, not that your recipients can. In fact, you can’t prevent your recipients from replaying your pics and vids.

Snapchat deviated slightly from its self-destructing style in October with the Stories feature. It lets you share a Snap publicly or with friends that can be viewed an unlimited number of times for the next 24 hours, and then it’s gone. But with Stories, it’s the sender who chooses to make a Snap viewable multiple times, whereas Replay hands that immense power to the recipient.

If Snapchat wanted to help you avoid missing the sound in a video, it could tell you whether a Snap you’ve received is a photo or video before you open it. [Update: Or at least do it more clearly, as I didn’t even realize red Snaps are photos and purple Snaps are videos] If it wanted to keep you from accidentally slipping and starting the timer on a Snap you then don’t, it could make you double-tap-and-hold or swipe-and-hold to open a Snap.

Instead, it broke the core mechanic that’s the foundation of its budding social empire. CEO Evan Spiegel better be dead certain this is the right move, or he should remove the Replay feature before Snapchat’s ephemerality itself vanishes.