Content recommendations company Taboola wants to be everywhere readers are, offering up links that they’ll find interesting (or at least click on). With that in mind, the company is releasing an API that will allow publishers to build its recommendations directly into their mobile apps.

Taboola, in case you didn’t know, is the company behind all of the “From Around The Web” and “You May Like” recommendations that you see at the end of post from such reputable publications as Huffington Post (owned by AOL!) and TMZ.

Recommendations include such high-quality links as “4 Symptoms Of Male Menopause” and “Jenny McCarthy and Her Boobs” (see below), which is an incredibly lucrative business, but causes some people to tweet stuff like this:

Wherever "around the web" is, remind me not to go there.

It’s hard to hate on Taboola too much, in part because I know that my clicking on Taboola stories about what you can get away with when you’re drunk is part of the reason I’m served up “content recommendations” about drunk chicks doing outrageous things when only partially clothed.

The company has also done a fair amount of work to allow readers and publications themselves to filter out recommendations they don’t want to see more of. Not a fan of stories about Anne Hathaway’s yoga pants? Hover over the recommendation and click the little “X” and Taboola will take that vote of non-confidence into account before it tries to serve you up another story about celebrity nether-parts. 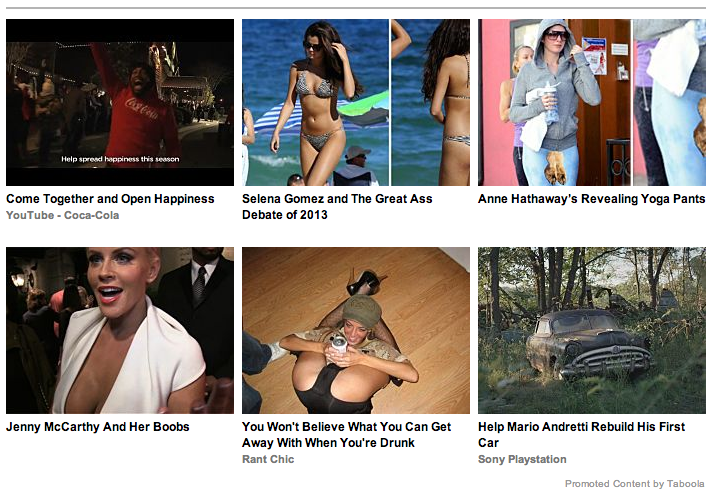 Anyway, now that its links are available all over the web, it was only natural that Taboola would want to insert them into mobile apps as well. To do that, it’s launching a mobile API today that will enable publishers to quickly integrate Taboola into their native mobile environments and have content recommendations served up directly in-app.

The result? More people clicking through to more pieces of content. According to Taboola, its CPMs were over 200 percent higher than typical mobile banners, and click-through rates were 400 percent higher.

On desktop, mobile web, and now mobile apps, the company is betting on growing its business even more aggressively than before. Taboola has raised $40 million from investors that include Pitango Venture Capital, Evergreen Venture Partners, WGI Group, Marker, and Eyal Gura.