Instagram may prove a valuable platform for advertisers. Instagram released its first results on ads since they began appearing November 1st. Brands saw average ad recall up 3X while brand message awareness was up 10% across four campaigns, with Levi’s reaching 7.4 million US 18-34 year olds in 9 days while Ben & Jerry’s reached 9.8 million US 18-35 year olds in 8 days. These don’t prove real return on investment, but Instagram calls the results “promising”.

Instagram’s highlighting of reach, recall, and awareness shows it sees itself as a host of institutional brand advertising that generates demand, rather than a platform for direct performance advertising that fulfills demand and directly leads to sales. This pits Instagram against TV and print media opposed to Google Search and most banner ads.

Advertisers typically use television commercials and magazine ads because they can send millions of people a vivid message they remember. If brands can get the same out of Instagram, they might shift some of their marketing spend there. Of course, these results come straight from the mouth of Instagram and aren’t super detailed. It will likely need independent studies showing positive results, or to actually show the ads make people buy more before brands start pouring money in.

The advantage of these ads for Instagram is that they don’t rely on user clicks, and therefore don’t try to pull people away from the app’s experience. The photo and video app is designed to be a relatively lightweight, relaxing, passive experience where you let the art wash over you. Brand ads of pretty people in jeans, tasty ice cream, and luxurious jewelry fit that format. 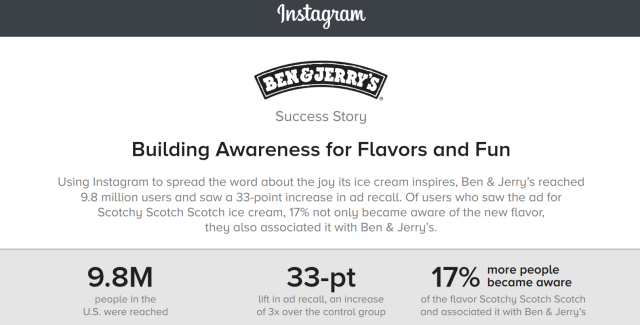 Five days into its first campaigns, Instagram CEO Kevin Systrom said 5% of ad impressions had led to Likes, indicating at least some users were enjoying the ads. Still, comment reels on the ads have shown significant backlash from users who are pissed about marketers injecting themselves into their previously ad-free feeds.

At the time on stage at GigaOm’s conference, Systrom said about the ads, “Are they making us hundreds of millions of dollars per day? No, but that wasn’t the goal. We announced we’d take it slow doing it the right way.” Last week at the launch of the Instagram Direct messaging feature, Systrom noted it was too early to discuss monetizing the new products, and that the Facebook-owned company was more focused on big campaigns like the ones analyzed here.

Unfortunately, focusing on an ad model of this kind locks Instagram in to an endless quest to suck in more time-on-site. The more photos and videos you look at, the more ads you’ll see, and the more money it makes. That contrasts with products like Google that center around getting you the information you want as quickly as possible, and therefore aren’t incentivized to be distracting blackholes of attention. 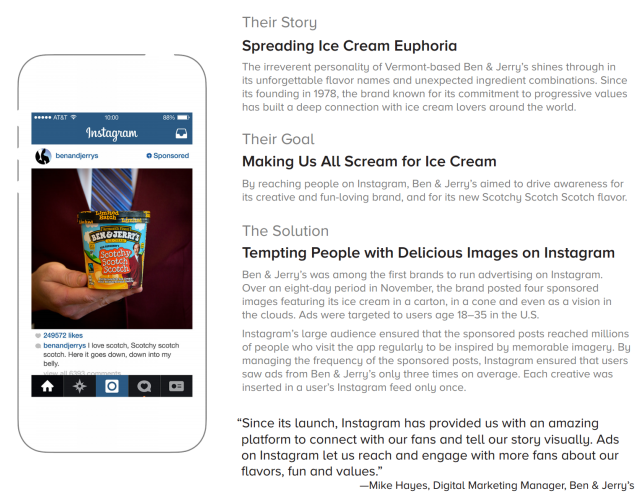