Today, if you’re looking for quality educational content on the Web, the choices are many, and it won’t be long until you’re listening to Sal Khan explain Algebra or watching a professor dissect the Periodic Table. Yet, while inquiring minds now have access to an increasingly dizzying area of learning platforms, most of these sites tend to offer digital classes and courses — in other words, they lean towards academic subjects and mastery. But when it comes to more practical learning, instruction and “how-to” questions, the choices pretty much end at YouTube. It’s tougher to separate the good stuff from the noise.

Justin Kitch launched Curious.com this summer to provide inquiring minds and lifelong learners with a solution: A place to find how-to content on any subject. Through its marketplace of instructional videos, Curious allows anyone and everyone to peruse its catalog of over 3,000 bite-sized lessons that range from five to fifteen minutes on topics that range from how to grow organic asparagus or brew beer to learning the art of salsa dancing. 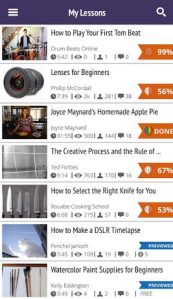 Following the launch of its iPad app in August, today Curious continues its expansion into mobile with the launch of its first native iPhone app. With its new app, users can now access Curious’ library of micro-video lessons — and learn the ukelele or how to dice a tomato — while on the go.

The Curious founder stopped by the TechCrunch TV studio last week to give us a demo of the new iPhone app, which you can find above. In the demo, Kitch explains that the new app allows users to scroll through the startup’s library of videos and touch on the video they want to view lessons in portrait mode.

Essentially, opening a video in portrait mode gives you access to the supplemental information — like images, files and links, etc. — that one would normally find on the website. The app also enables you to peruse that content without having to pause the video, or to flip your phone horizontally to watch the video in full-screen.

Curious’ new app was designed specifically for the iPhone and to take advantage of iOS 7’s bells and whistles, the highlight of which is its LearnSync feature, he says, which allows learners to pick up lessons where they left off — regardless of where they initiated the lesson, desktop or on the go.

For consumer-facing companies, broadly speaking, launching a mobile app isn’t exactly newsworthy when an app now launches once every two seconds — nor is “having a mobile strategy” particularly innovative. Education, on the other hand, has been slower to move to mobile, and the list of top-tier, memorable mobile apps is much smaller — especially compared to, say, social networking.

There are a few, and Apple just named Duolingo one of it’s top apps of 2013, but that’s about it. The reason for that is partly because it’s not education companies’ core competency, and partly because a lot of the courseware-type models that are so popular today, MOOCs and so on, don’t necessarily translate well to the Web. Yes, you can catch up on your Astronomy Class on the bus or train, but not all education experiences make the jump smoothly, particularly video.

As a video-based education platform trying to squeeze visual lessons into a smaller form factor, one could fairly expect this to be true of Curious as well. Yet, how-to lessons really do seem fundamentally more compatible to the mobile experience. Especially in Curious’ micro, bite-size format, and with the “resume” function, a seemingly insignificant feature, but glaringly apparent when it’s missing (see Coursera’s new app).

As long as Curious keeps the level of instruction high, why wouldn’t I want to use my phone or iPad as I learn a song on the guitar, or take my phone with me into the kitchen as I watch tips on how to properly cook a Hot Pocket in a dirty microwave.

Beyond mobile, Curious also recently added another key feature to its platform recently, when it launched “Lesson Builder” to allow its instructors to, yes, build their own lessons themselves. (Joining Udemy and a handful of others in offering this functionality.) The more tools that Curious can offer teachers to simplify the content production process and student outreach, or encourage loyalty, the better the experience for the end user — and the more value it creates. (Particularly in the revenue department.) More on the startup’s new teacher tools here.

Readers can find more on Curious’ story and product in an excerpt from our prior coverage below (edited for brevity) and can check out its app IRL here. 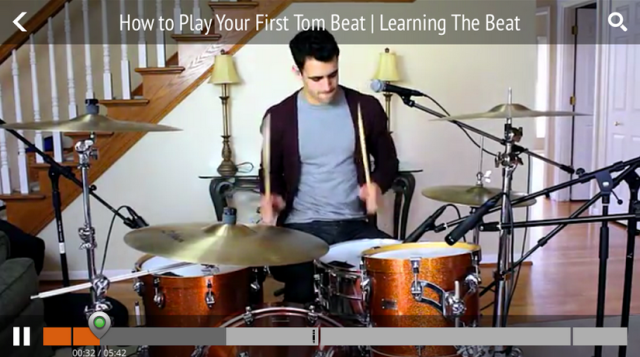 Rather than rely on YouTube to beef up its catalog of lessons, Curious has built its own proprietary video platform that gives the startup a little defensibility in the ever-increasing world of video-based education. In practice, this sets the foundation for the other ways the platform wants to differentiate itself from YouTube and other educational sites, meaning that users can not only watch videos and leave comments, but film videos of themselves performing whatever task or lesson it may be and upload them to the site so that the teacher can give feedback on their technique.

Users can also ask teachers targeted questions — like what kind of barley to use in their beer or what kind of soil to use in growing their organic tomatoes — and tag their videos at the point in the lesson where they have questions. On the flip side, instructors will eventually be able to offer lessons for free or for a price, with Curious providing the tools that will allow them set the price and collect micropayments.

The platform puts a low ceiling on how much teachers can charge, keeping prices in the single-digits in an attempt to lower the barrier for the average learner. For now, all of the content on Curious is free, but Kitch says paid lesson functionality will be coming soon.

Going forward, feeling the need to be everything to everyone could become a handicap for the site — though it doesn’t have to be. Over time, Curious can collect data on what types of content people really want to consume, offering a little bit on everything, but really focusing on the most popular (and monetizable) subjects. It can also acquire customers more inexpensively in areas that are popular but more difficult to monetize, and then sell them lessons in more profitable areas.

In the short term, Curious is helping itself stand out by building out features that allow collaboration and interaction around its content. For example, the platform enables learners to download attached files, view a list of (and purchase) related materials, reach out to and collaborate with other students and send teachers “Curious Cards” that contain those videos and photos of what they’ve learned.