I get a lot of crap every time I say that my main camera is my iPhone. The sensor snobs and glass hogs come out of the woodwork to tell my why I’m an idiot for using it as my primary shooter. But the truth is I don’t give a crap — I’ve used the best lenses and cameras in the business and I know good from great from amazing.

The iPhone’s camera is best for me, personally, and I’ve worked within its limitations to create a lot of pretty fun and memorable photos over the past few years. My SLRs and compacts (dozens at last count) are still there and I head to the Canon if I need the power for some reason or I’m doing a family portrait session. But most of my shooting is done on the iPhone. (I’d do it on Android but most of the cameras suck, and the Lumia 1020 has a great camera but it’s slow and I think Windows Phone needs a refresh). 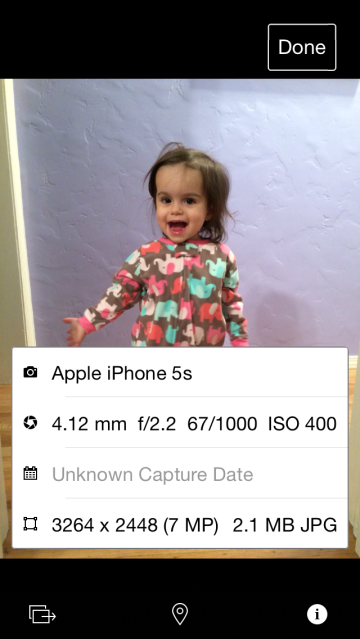 Which is where Photos+ comes in. It’s a camera roll replacement app for iPhone, it runs $3 bucks and it’s pretty great. It displays photos larger and in a more pleasant configuration than Apple’s camera roll and offers me, as a reformed pro photographer, quick access to my EXIF data to see what the camera is doing when I’m shooting from the hip.

The tiled layout means that it’s able to present photos in their original ratios and orientations without a ton of white space. Vertical images alongside horizontal and square images in one continuous flow that utilizes every pixel of screen real-estate while still showing you your entire image. This is a camera roll that’s been re-imagined with a ‘device first’ view, rather than being beholden to an arbitrary crop, like Apple’s app. There’s not much more irritating than having to pop in and out of a cropped image just to check to see if it’s the exact one you want to share. 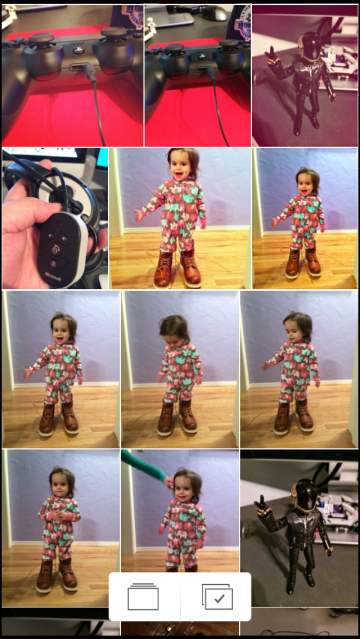 Tapping on icons in the image view will toggle on or off a location map and a pane with EXIF data like aperture, shutter speed and ISO. This also means that you’re able to easily ID images you’ve imported from other cameras if you’re into that sort of thing.

And, to top it off, the app supports gifs right in stream. I save and share a lot of gifs and love that iMessage now handles them natively, but I’m always miffed that I can’t see them play back in the camera roll. Photos+ fixes that, which is fun.

Developer Justin Williams, who also makes my favorite text editor for iPad, Elements, says that he’s trying out a different kind of pricing model for the app. There’s a fixed price, but there is already one pack of upgrades that allow you to share to more networks than the standard Facebook, Twitter, Flickr, iMessage and email options.

“I’m doing a model more akin to buying a car,” Williams told TechCrunch. “$2.99 up front to get the base model but in subsequent releases I’ve got some IAPs planned to “trick out” the app for more pro users. ”

Other features planned for the future include IPTC search, with custom fields, more sharing services and importing from Dropbox, Loom, Instagram or other services.

“The idea being to do mini ‘spikes’ so that the app can sustain itself longer without having to do a new ‘for pay’ version yearly because that sucks for everyone,” says Williams.

Williams likens the take to an auto enthusiast who likes his car, but wants to add items on to trick it out over time.

My one dream feature for Photos+ is the ability to delete images on the fly. Because it offers a complete view of the image in the stream view, you’re able to make easier editing choices and deleting would be much easier. Unfortunately, Williams says, Apple’s current APIs do not allow for that behavior. One can hope for the future.