Social transit app Moovit is announcing a massive round of funding this morning, closing a $28 million round led by Sequoia Capital, with participation from its existing investors BRM Group and Gemini Israel Ventures. Gili Raanan will represent Sequoia on the Moovit board. The Israeli company previously received $3.5 million from BRM Group and Gemini Israel Ventures.

In the same way Waze was able to crowdsource traffic data, Moovit has been able to be the social destination to find data around public transit. Moovit, which launched in 2012, offers Android and iOS apps that gives users data around when the next bus or subway or train or ferry (any public transport) is due to arrive in real-time. This data is brought in from its own users, as well as from public sources, like timetables from transit authorities. Users can also plug in points in their origin and destination, and Moovit will show them the fastest routes using public transportation, and whether these routes are running on time. 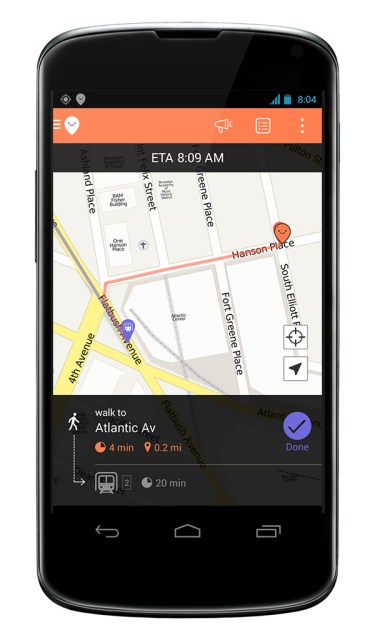 Users can set the app to send them alerts to let others know if their particular bus or train is running behind schedule, or if the bus/station stop is overly crowded. What’s really interesting about the app is the data brainpower behind the scenes. Moovit is actually using predictive analytics and pattern recognition to combine with crowdsourced data to help give users the most up to date data around their transport options. So the company will actually note if a particular line has had trouble, or is frequently running late.

“We are trying to reduce the level of uncertainty in public transportation,” Nir Erez, Co-founder and CEO of Moovit, told me in an interview. In a little over a year, Moovit has accumulated 3 million users, hundreds of thousands of them daily, he explains. And these users are actively contributing transit data to the app, Erez adds. To date, the app has handled more than one billion requests for real-time information and more than 10 million user-generated reports are created each day.

While Moovit, which operates in 100 cities, is seeing fast adoption in the U.S., Latin America and Europe, Erez and his team have their sights set on expanding to Asia. The funding will also be used towards doubling down on technology and data analytics on the backend.

For now, Moovit allows any developer to use its data for free. “We’re not making money right now, but our investors are not expecting us to focus on this right now,” says Erez. But Moovit is frequently compared to Waze, another Israeli startup which sold to Google for $1.1 billion (and also had minimal revenue). In fact, Waze co-founder Uri Levine is an investor and sits on the company’s board of directors.

At the time of the acquisition, Waze had around 50 million users and a massive trove of crowdsourced data, which Google could integrate into one of its flagship products, Maps. It’s not too ridiculous to think that Moovit’s data, if it reaches additional scale, could be complementary to Google Maps as well.

Transit planning itself has other competitors, including Google Maps. But similar to Waze, the value of Moovit is in its crowdsourced social data and the layering of this data with products like Maps or even advertising.