Google has just announced a massive update to Google Glass which adds a lock screen, Hangouts chat, direct YouTube uploading via a Glass app and a ‘wink to shoot a picture’ mode. The wink photo mode is obviously interesting as developers had dug up references to it in the Glass firmware a while ago and it’s just making an appearance now.

You can shoot images by simply turning the mode on and winking your eye to snap photos. This eliminates the need to snap an image using the photo button or a voice command. There are some immediate privacy issues which rear their heads here of course — winking is a lot less obtrusive than a hand to the face or saying it out loud. 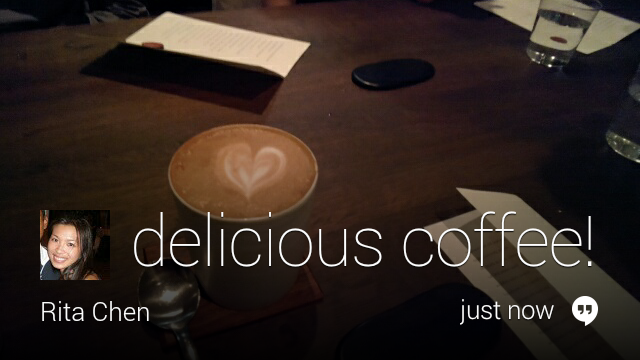 “Glass is about helping you look up and experience the world around you without getting bogged down by technology,” reads the posting. “Based on this philosophy, we’ve got a new setting that lets you quickly and easily capture the moments you care about with a simple wink of the eye. Whether it’s capturing an amazing sunset on an evening walk, or photographing your receipt for the lunch you’ll need to expense, you can now stay in the moment and wink to take a picture instantly.”

The post says that photos are ‘just the beginning’. It asks you to imagine situations like ‘winking at a cab’s meter’ to pay for a ride, or winking at a pair of shoes in a shop window to purchase a pair in your size and have them shipped to you.

“You wink at a cookbook recipe and the instructions appear right in front of you – hands-free, no mess, no fuss. Pretty cool, right?”

Sure, maybe. For now, though, it will be a lot easier for people to take pictures with Glass without their subject’s knowledge. It seems likely that this will cause more friction with those who take exception to Google’s head mounted computer. Some restaurants have already banned the devices in the interest of customer privacy.

A new lock screen mode will now clamp your headset down until you unlock it via taps and swipes in a pattern you set. You can now also upload to YouTube directly from the Glassware app on your device, an experience that was previously enabled by developers hacking the platform. Google Music All Access subscribers now also have access to their music and playlists with this update.

Google also notes that it dropped the iOS version of MyGlass on the App Store too soon, but says that it will be up again later this week. The app showed up momentarily on the store before disappearing earlier today.