Twitter’s recent acquisition of MoPub has fired up a native advertising business that will launch with in-stream ads on the Tango messaging platform and with other partners. The product is obviously taking some cues from Twitter’s own ad products, which take the form of promoted tweets and trends.

The new ads will launch on Tango — among other partners — with in-stream posts that look like other Tango updates, but feature a small ‘sponsored’ mark in the upper corner. Native ads are fairly hot at the moment, with most social networks looking to fuse them with their core timelines or feeds in some manner. Because they’re less jarring and easier to pass off as ‘content’, they’re being treated as the next big thing for focused mobile experiences like those found in apps like Instagram. These in-stream ads will be presented by the apps themselves, templated to match their surroundings, but served up by MoPub.

This move is also the first large payoff of Twitter’s MoPub acquisition, and another way in which Twitter will add revenue to its ad bottom line. The company has made most of its money so far off of promoted tweets, with 65 percent of ad revenue coming from mobile devices.

As far as we understand, these ads won’t be using data from Twitter’s recently announced ad retargeting program to better suit the viewers, though it would seem like a logical option at some point. Currently, MoPub does not serve Twitter’s own native ads, though just purely from a duplication of labor standpoint it seems to reason that they might begin doing so. Twitter has been massaging its own ad products for some time now, recently broadening its keyword ad targeting to catch edge cases in language. 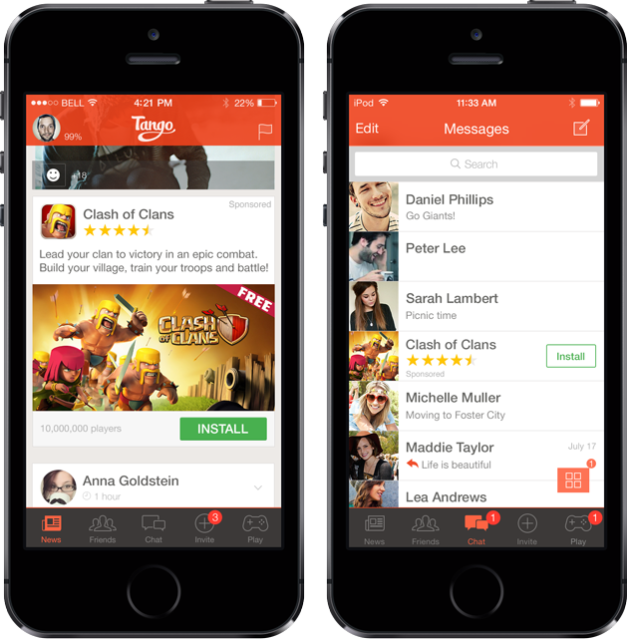 The ads, which you can see above, can come in a variety of shapes. The one on the left is a full update and the one on the right, also an ad, is in compact form. This emphasizes the fact that they’re making sure the selling points of the ads are that they’ll be unobtrusive.

This also fits in with the larger trend towards freemium apps and ad-supported efforts. Many social apps, or those that require large amounts of users to be either effective or enjoyable, need to lower the barrier for new user signup as low as possible in order to gain traction. Offering them a native ad option that isn’t a big ugly banner could prove a popular way to get positive cash flow.

MoPub founder Jim Payne notes in a blog post today that the ads can also be content that is promoted by the app — allowing them to run their own promotions and ads as well as those from outside advertisers.

MoPub is currently handling 3 billion ads a day, and Payne — now Twitter’s VP of Exchange — told The Wall Street Journal that native ads could add billions more to their inventory. Twitter acquired MoPub back in September, and closed the deal in October, for a reported $350M. MoPub’s net revenue for the first six months of 2013 was a reported $6.5M.