LinkedIn, the social network for the professional world, has been going through a overhaul of every aspect of its platform. Today, it’s the turn of the inbox, which is picking up new features such as better navigation and better preview information. In a way, it’s LinkedIn’s personal contribution to this week’s trend among social platforms like Twitter and Instagram to revisit their messaging services.

LinkedIn says the new inbox is getting rolled out globally starting today. 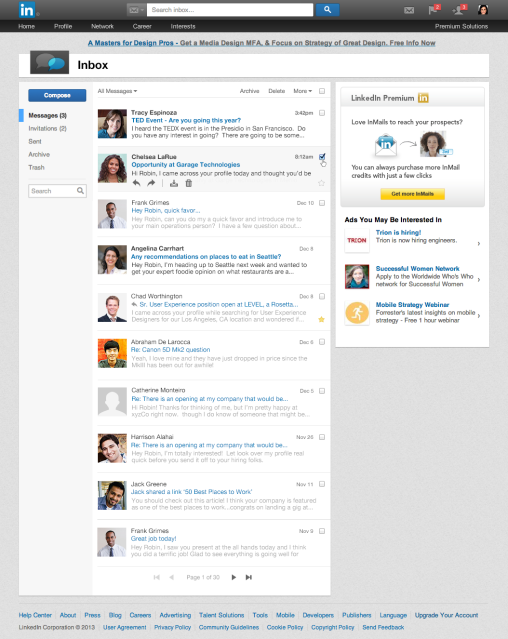 Most importantly, the new inbox will give users previews — both of messages themselves and of the people who are sending them: when you hover over someone’s name in a list, their basic details pop up, along with an option to connect if you are not already in a common network. That string of information is carried through to when you open a message: you get more biographical context now about who is reaching out to you — especially important if it’s a “cold email” from someone who is not in your network already.

The other very key difference is that inbox navigation tabs have been pared down by quite a bit: you now get a condensed list on the left side of the panel with messages, invitations, sent, archive and trash folders. In the past, messages and invitations were split with tabs both at the top of the column and on the left, meaning you had two sets of navigation buttons along the X- and Y- axes. The right side and top banner, as with other LinkedIn pages, are reserved for advertisements. LinkedIn tells me that it has no plans to expand those ads for the moment.

Here’s what the page looked like before today’s changes: 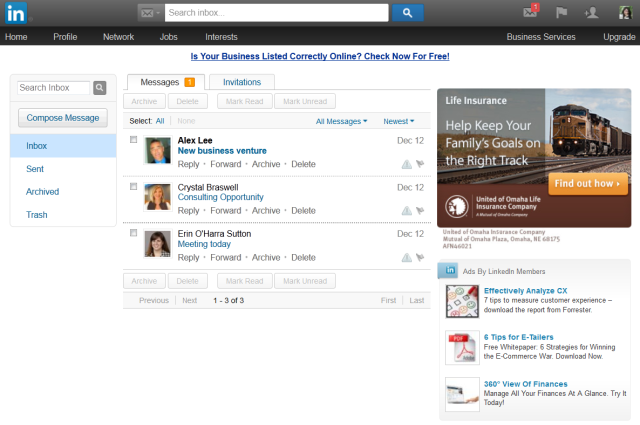 As with many of the updates that LinkedIn has made to its homepage, mobile app and other services, the changes to the inbox are well overdue, and in some regards table stakes for LinkedIn specifically.

They come at a time when all social networks are zeroing in on better capabilities for people to speak directly to each other, and not just on wide-open platforms. LinkedIn was built with direct messaging from the start; and in a way, you could argue that its focus on professional users and specific requests (for example, around jobs and work) means that channel is even more necessary than it is in a consumer network.

The end result of improving the inbox experience are two-fold. The first is that it will mean that users potentially use it more, and potentially for more than just short follow ups but deeper conversations. (That’s a parallel ambition shared by other social networks like Facebook, with its own messaging platform.) You can see how, if people did use it more, then LinkedIn could start to potentially charge for certain aspects of its messaging service — similar to how it does for other parts of LinkedIn.

The other potential benefit is that more time spent in the inbox will contribute to the bigger effort that LinkedIn is making to boost engagement — time spent on the site is a crucial aspect of how it will be able to grow its ad revenues. (Remember that there are ads in the inbox, and in messages you open while you are there.)