Uber is offering Lyft drivers several perks to entice them away from the ride sharing service. The perks include a $50 gas card just to stop by Uber HQ in San Francisco, and signing bonuses if they choose to actually take them up on the offer.

We’ve been hearing reports of a signing bonus for a while now, but a flyer — discovered in a Lyft by Tradecraft founder Misha Chellam, details exactly what Uber is offering switching Lyft-ers. Chellam says someone from Uber hopped into the driver’s car for a 3-block ride and handed them the sheet.

On one side is a large notice for a $50 gas voucher, which gets Lyft drivers in the door. On the other side is the details of the program which offers new signups 100% of fares through the end of 2013, with no Uber commissions taken out. There’s also a $500 bonus if drivers pick up 20 riders before January 1st, 2014: 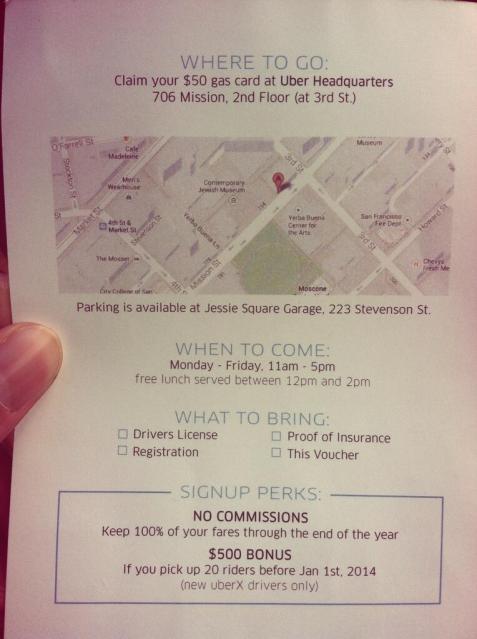 Our own Josh Constine also heard a few days ago from a Lyft driver that Uber was offering new drivers a $500 bonus for picking up a set amount of rides.

Lyft Director of Growth Adam Fishman commented on Chellam’s tweet, noting that the company was aware of the promotion.  “We’re aware and flattered by the interest in our awesome community of drivers,” read Fishman’s reply.

If this strategy is effective, it could affect Lyft on a couple of levels as it reduces their supply of drivers while increasing Uber customers’ available pool of drivers. Heading into the holiday season that raises the possibility of people not being able to find a Lyft in San Francisco — and turning to Uber to find it much easier to get a car. Uber is on a mission to find more drivers, recently announcing a partnership with financiers and car makers to allow drivers approved for its platform to purchase affordable cars. Founder Travis Kalanick told TechCrunch that they wanted to get ‘hundreds of thousands’ of cars on the road.

Additional reporting by Josh Constine, article updated to reflect that Uber does not employ drivers.