No, this might not be the sexy new disappearing messages app. However, it’s a startup that takes software and applies it to an unsexy but potentially lucrative market.

KeepTruckin is an eight-person, San Francisco-based startup that’s trying to make it easier for trucking companies to manage their fleets and have their drivers legally log their hours.

Long-haul trucking is a half-trillion dollar business in the U.S., employing 3 million drivers nationwide. Currently, drivers record their hours in paper books that they have to have with them at all times for potential inspections. Not only that, dispatchers who organize trucking fleets still use whiteboards and spreadsheets to manage their drivers. Then brokers have to make phone calls to look for truckers to move their loads.

It’s cumbersome and clearly in need of an overhaul, argues Shoaib Makani, who started the company after leaving Khosla Ventures.

Now that smartphone penetration is high enough in the U.S., Makani believes it’s time for an easier solution.

So he teamed up with Ryan Johns, who was previously a vice president of technology at Tapjoy, to start KeepTruckin. It’s a combination web and mobile service that helps drivers keep track of their hours on their phones. While developing the product, the founders interviewed hundreds of truckers, brokers, shippers and carriers while hanging out at truck stops in California.

“It’s a market area that has been really underserved,” Makani said.

They created a skeuomorphic user interface on their mobile app that almost looks like the paper logbooks so that truckers would feel comfortable using an app that felt familiar. It works with the current legal regulations and recognizes if a trucker might be running into a violation like driving for longer than eight hours. This is key because errors can cost drivers thousands of dollars in fines. 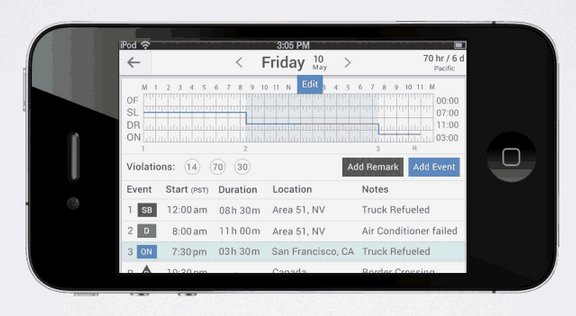 “The trucker wants to be in control,” Makani said, explaining why the app doesn’t auto-populate or passively detect when the driver is on the road or not. They’ve deployed the app to about 200 drivers so far in the field.

On the dispatcher side, trucking companies can direct message their drivers, audit their logbooks and track their location if the driver consents to it.

The plan is to let the app grow organically as truckers pick it up. Because all fleets are registered in a public database, KeepTruckin can use that to reach out to the employers of their users and market the fleet management software. The software is free for now, although they will charge a nominal amount per month per driver later on.