The News Feed is about to get a lot more lively. Just days after pushing its auto-play feature for videos to all mobile users, today we spotted auto-playing videos on Facebook.com, and the company confirms to me “we’re continuing a wider rollout of in-line video on web”. Once this rollout is complete, the stage will be set for the introduction of more flashy video ads.

Until now, Facebook’s News Feed has always been still. Everything stays put as you scroll past. All videos were locked in place behind a play button, and no animated GIFs were allowed. But Facebook is putting the feed in motion for the first time with the auto-play videos.

For details on exactly how it works and feels, check out my deep dive on auto-play for mobile and Facebook’s aspirations to become more video-centric. On the web, auto-play makes it so videos uploaded directly to Facebook and videos shared from Instagram begin to play as soon as you scroll over them. They’ll keep playing even as you scroll around, though they stay silent unless you click/tap them, in which case the audio plays. The videos don’t loop, and YouTube or other external videos that appear in the feed as previews of links don’t auto-play at all, giving Facebook-hosted videos an advantage.

The feature was previously being tested on the web with a very small group of users after Facebook revealed it was starting experiments with auto-play on mobile in September. It’s currently rolling it out to everyone on iOS and Android, and Facebook is now finalizing a design for the web as it pushes it out wider there. You can see what an auto-play video looks like in action in the screenshot below, courtesy of Jeff Widman from Unified. 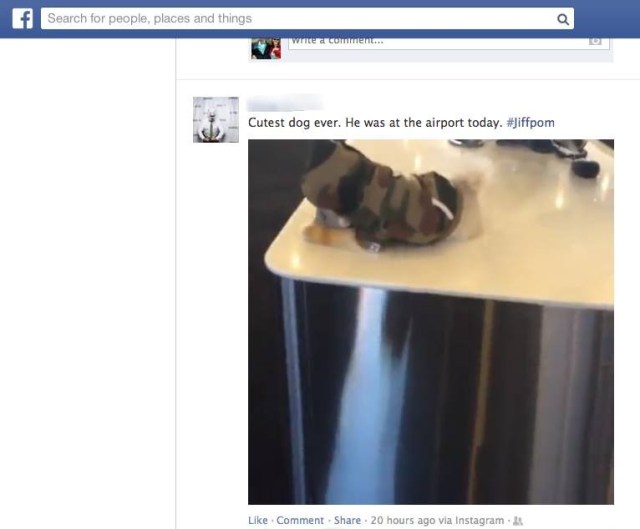 Auto-play could give Facebook-owned Instagram’s video feature a boost. People are more likely to share videos if they get seen, and auto-play basically assures that.

Perhaps once auto-play video is available to everyone, Facebook might start allowing animated GIFs, as they wouldn’t stick out so bad. Mike Isaac of AllThingsD reports that Facebook has had GIF support built for a while but has hesitated to roll it out. Facebook may have been worried that GIFs of “low-quality memes”, a content type it’s trying to downplay, would overrun the feed. It could potentially mitigate that by only rendering the animations in-line if the GIFs were uploaded natively like with videos that auto-play, and not if they’re hosted elsewhere and linked to.

With viewing of individual videos improved, I bet we’ll see Facebook revamp its mobile video capture and sharing tools relatively soon. It might also look to provide a better way to discover and watch multiple videos, maybe with a lean-back sort of channel for watching back-to-back videos from friends.

But what the world is waiting for, or worried about depending on your perspective, is more aggressive video ads on Facebook. Once auto-play video is available to everyone across devices, Facebook may have all its ducks in a row to introduce auto-play video ads.

Marketers may love it if the price is right, because it will let them communicate with customers in a much richer way than photos and text. Advertisers might be able to repurpose the ads they shoot for television to fit Facebook, and could shift spend from TV commercials to Facebook.

Users may hate it because many simply hate ads all together. Personally, seeing movie trailers or Super Bowl-quality commercials in my News Feed doesn’t seem so bad as long as they don’t immediately auto-play with sound and I can scroll past or x out of them. If they act as roadblocks forcibly delaying me from viewing updates from friends, though, I might be pissed too.

No matter the format, Facebook will have to do a careful job balancing the frequency with which video ads are shown, so I’d expect a slow, cautious rollout with lots of testing.

If Facebook can make auto-play video feel like a natural part of the feed, it could unlock a new level of proficiency in consuming the world.

Auto-play could give us quick windows into our friends lives that are almost as easy to skim as photos but much more evocative. News outlets could serve up footage from major events happening around the world or recent sports highlights. Imagine watching an epic interception returned for a touchdown silently filling you feed with a remarkable athletic achievement that you might not have clicked and waited to load, but you’re happy to see. And if you want to hear the hits and announcer’s commentary, one click and it’s like you’re watching television.

And that might be the goal of Facebook video. To combine the vividness of TV with the efficiency of reading.