Austin-based Insurance Zebra, now just called The Zebra, has closed its $4.5 million seed round of funding, which now includes an added $3 million investment from Simon Nixon, founder of the U.K.-based Moneysupermarket.com, and existing investors. Nixon joins Mark Cuban, Mike Maples Jr., Birchmere Labs and others, in backing this startup, which aims to be a “Kayak for auto insurance.” That is, on The Zebra, users can shop anonymously for insurance, comparing a variety of quotes that are provided in real-time.

The company first launched its service to the public this September, initially targeting California and Texas, the two states with the largest number of drivers. Today, The Zebra has opened its doors to drivers looking for auto insurance across any state in the U.S. 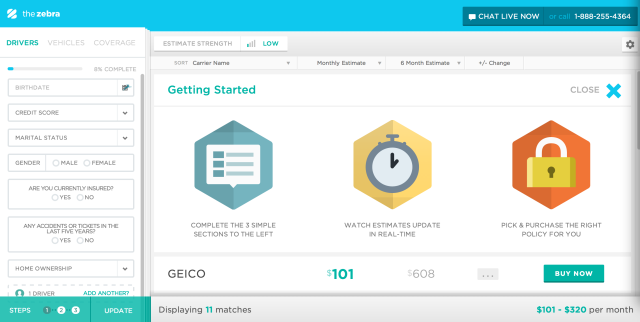 Drivers are able to compare 204 companies on its platform, including 22 bigger brands, including Esurance, Travelers, The General, and others which the company isn’t able to publicly disclose.

To get started, users are walked through a short online questionnaire which starts out very simply – just asking for a car and a zip code. They then see their quotes become more accurate and precise as they move forward and answer more questions, in a process that’s designed to take just a minute or so.

In order to generate quotes, the company uses a combination of public data (public rate filings) and data provided by the insurers directly – the former being an attempt to reverse engineer auto insurance pricing for those companies The Zebra doesn’t yet have a relationship with.

Since launch, the company has seen 120% month-over-month growth in revenue, which comes from policies sold, primarily over the phone. However, The Zebra is now working on direct integrations which will allow drivers to buy their policies online. According to founder and CEO Adam Lyons, Zebra has delivered over 1 million quotes since its soft launch in September, and today covers over 85% of entire auto insurance market, with 1,751 insurance products in all states.

As for the extension to the seed round, it was really just a way to bring in Simon Nixon, he says, instead of opening up a Series A. “Every existing investor participated, but we wanted to make room for Simon because he’s awesome,” says Lyons, noting how Nixon helped take the large comparison site moneysupermarket.com public, and is now betting on The Zebra to do the same for the U.S. market.

Correction: Nixon is not the only investor in additional $3M, but is the only new investor in the round. The article has been changed to clarify this.