Somehow, 2013 marked the year that Helsinki became a global gaming capital in its own right.

Maybe it was because Supercell, a humble gaming studio that started back in 2010, blossomed into a $3 billion company in less than a year.

Or maybe it was when Rovio announced the two billionth download for Angry Birds with a dubstep dance on-stage from the Finnish National Ballet.

Or maybe it was because even Japan’s most influential gaming entrepreneurs like widely respected DeNA founder Tomoko Namba and billionaire and GungHo co-founder Taizo Son showed up for Finland’s flagship startup conference Slush last month. Even global VC firms like Accel, Atomico and Index held competing dinners all on the same night to scout for their next hit-maker.

Or maybe it was just the naked Finns shamelessly running around during the conference after-party between the freezing ocean and the sauna at 2 a.m. in the morning.

In any case, this Nordic critical mass is no fluke. Supercell and Rovio’s wake has left a generation of local game designers and developers invigorated and hungry to prove themselves on the world’s stage. There are 180 gaming studios across the country, up threefold from 2010, according to statistics from Neogames and IGDA Finland.

“The main difference is that the companies now believe in themselves. They know they can do anything,” asserted Peter Vesterbacka, the chief marketing officer of Rovio (pictured below). 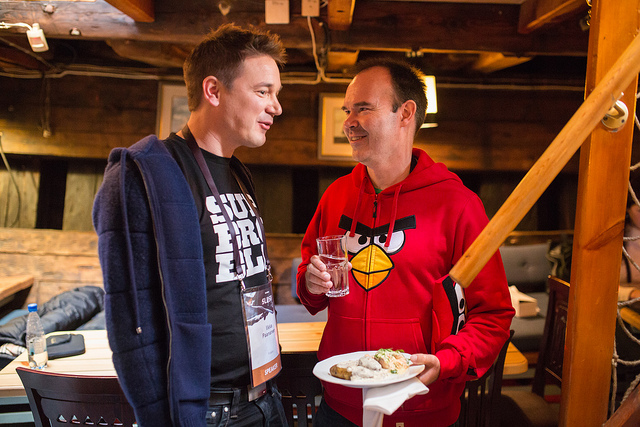 In 2009, you could have said it was interesting that Angry Birds originated from Finland of all places. Last year, it raised eyebrows that there were two, not one, gaming phenoms out of the country.

Now there are dozens of studios waiting in the wings like Grand Cru, Next Games, Boomlagoon, Playraven, Seriously, Frogmind, Fingersoft and others. Grand Cru, the most watched up-and-coming team out of the region, has been polishing its Minecraft-inspired title Supernauts for well over a year and is set to launch in a few days in Finland in timing with the country’s independence day.

Staffed with alums from earlier gaming predecessors like Digital Chocolate, Max Payne-developer Remedy and Redlynx, Finland’s studios aren’t novice game makers. Many of them come with more than a decade of experience in a community that traces its roots back more than 20 years into the early 1990s Demoscene, where thousands of developers would huddle around glowing computer screens hacking at mega-conferences like Assembly every late summer (see below). 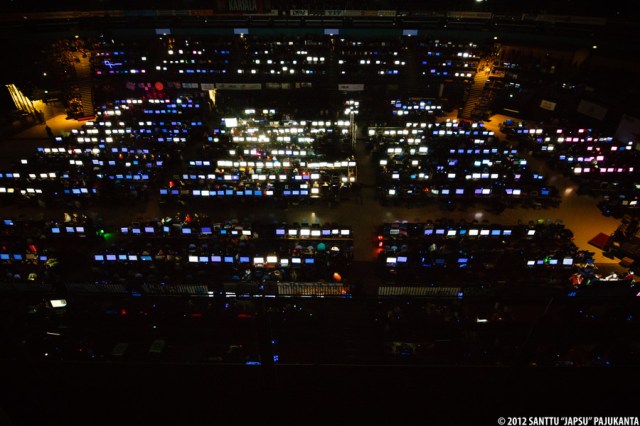 “Back in the 1990s it was really just a couple of companies like Remedy, Housemarque, Bugbear, Redlynx and a few others,” said Jussi Laakkonen, who runs mobile gaming network Applifier. “They were all founded on Demoscene talent. Being an entrepreneur back then was really odd. There were very few role models, if any, and everyone was bootstrapped as there was no VC funding.”

At that time, entrepreneurs mostly took funding from Tekes, a Finnish government funding agency for technology companies, Laakkonen said. Since the late 1990s, the agency has provided the domestic gaming industry with about 50 million euros ($67.7 million) in funding and last fall, they launched a dedicated 70 million euro ($94.8 million) program for gaming called Skene.

But a few early companies were able to pioneer the way, like Max Payne-maker Remedy, Mr. Goodliving (which was sold to RealNetworks) and Sumea, which Supercell CEO Ilkka Paananen sold to early mobile game maker Digital Chocolate. While none of those deals were huge acquisitions, they did cultivate a core of gaming talent in the Finnish community.

Then Rovio, which launched Angry Birds on its 52nd try, and Supercell, which is now valued at more than $3 billion through its recent Softbank and Gung-Ho investment, blew open the doors.

And now that the local scene has produced two globally competitive companies in the last few years, VC firms are paying attention. Skype co-founder Niklas Zennstrom, who went on to form Atomico Ventures, has been an early backer in the scene with investments in both Rovio and Supercell.

“Many years ago, we were very much by ourselves,” he said in an interview at Slush. “The most important thing is you now have role models. The reason you see so many companies in Nordic region is because we have had successes — Skype, Spotify, Rovio and Supercell. For entrepreneurs in Helsinki and Stockholm, that’s their benchmark.”

Shifting Dynamics on iOS and Android

The rise of Finland’s gaming scene also coincides with the way that the iOS and Android platforms have leveled the playing field for game developers globally. Before smartphones and Facebook, smaller gaming studios often had to work with publishers and give up a costly revenue share in exchange for marketing and distribution in the console era.

Today, companies like Supercell keep most of their design and developer talent at home in Helsinki while maintaining a small office in the U.S. that largely handles marketing and user acquisition.

Secondly, cutthroat and expensive competition on the iOS and Android platforms have also made product quality paramount. Two years ago, several American studios rose up a Zynga-like strategy of producing many titles that fast-followed on genres or concepts that were already popular. Studios could play a relatively simple game of arbitraging the cost of acquiring a user with maximizing their lifetime value or spending over the course of a game.

Studios have to offer something different or unique, or if they explore an existing genre, they have to do it a cut above any other existing title.

That’s where Supercell’s careful and deliberate approach paid off. Before Paananen greenlighted Clash of Clans and Hay Day, his company had killed more products than they had launched in 2012.

At its core, Hay Day is a farming game — it’s what FarmVille should have been on tablets. But Supercell innovated on the genre by incorporating sweeping gestures that were much more natural for a touchscreen device. That game along with Clash of Clans went on to bring the company $179 million in revenue in the first quarter of this year, even though Supercell’s headcount was just 100-strong.

A year and a half later, Supercell has yet to release a follow-up to mega-hit Clash of Clans. They’re still testing “Boom Beach” in Canada.

Other smaller studios like Frogmind have gone on win critical acclaim through surprising and eerily beautiful design. Their title Badland, which is a platformer with dark, silhouetted imagery, won one of Apple’s Design Awards for 2013.

“What I like about the local scene is that most people do not work in games because they want to make money. Instead, they want to make great games,” said Supercell’s Paananen. “Ironically, I think that is the right approach to take, and will also maximize the financial returns in the longer run.”

While many American studios were busy copying Zynga’s playbook, European companies with strong benches of gaming talent or deep repositories of titles like Supercell and King pulled ahead.

We’re starting to see the repercussions of this in the Silicon Valley market now. Young studios that prize quality and depth of game play are getting funding, even as many U.S.-based VCs have soured on gaming investments.

Hammer & Chisel, which is aiming to bring League of Legends-like gameplay to tablets, recently raised $8.2 million led by Benchmark Capital after appearing at TechCrunch Disrupt in San Francisco. Machine Zone, the Silicon Valley studio that spent more than a year polishing the engine behind its massive multiplayer title Fire Age, is now holding the fourth top-grossing spot on iOS in the U.S.

One other factor that has benefited both Finland (and its neighbor Sweden) in building consumer Internet and gaming companies is that they are really small countries. By default, Finnish startups have to think globally from the beginning, unlike companies from countries with medium-sized populations.

This automatically global mindset has meant that the local Helsinki community has been really savvy about racking up partnerships around the globe. Rovio was quick to set up offices early on in mainland China and Supercell’s big $1.53 billion investment came from Japan’s Gung-Ho and Softbank earlier this year.

With just 5 million people, Finland’s government has also ensured that the majority of its people speak English. The country also maintains one of the world’s top primary education systems, consistently outperforming U.S. students on international tests.

That’s helping local Finnish companies convince foreign talent to survive the brutal below-freezing winters and the extreme darkness during the months of December and January.

“We cannot compete with weather, but there are so many other positive aspects about Finland that seems to attract more and more foreign talent to move over,” Paananen said. “For example, it is safe here, most people speak English, we have one of the best educational systems in the world, the taxes and cost of living is reasonable and the working culture is nice, open and honest.”

Not only that, there’s a more collaborative environment in Helsinki where Finnish game developers are more open with their concepts and works-in-progress. The local chapter of the IGDA and Neogames regularly hold well-attended drink-ups while there’s an active Facebook group that celebrates each and every launch.

“It’s a very collaborative environment for shared learnings on technology, business models and game design,” said Andrew Stalbow, who co-founded the gaming company Seriously after leaving Rovio. “Local people and companies are genuinely supportive to each other and take a view that ‘all boats rise’ when competing for a global audience.

Is there a downside to success?

Rovio and Supercell’s success has undoubtedly changed the local culture. Not only do Finnish game developers feel more emboldened, there’s a headiness to the gaming community these days that feels reminiscent of the Valley’s over-the-top exuberance.

Rovio’s Angry Birds marketing stunts get more outrageous every time. There was the Angry Birds Space launch, where they attached a slingshot to the Seattle Space Needle. Then there was a takeover of Moscow’s Red Square earlier this year, where a Russian choir sang the game’s theme song along with dancing cans of Angry Birds sodas.

There are now also “mafias.”

Employees of Rovio and Supercell are starting to peel away to do their own companies. Supercell’s former director of analytics, Joakim Achren, left last year to start Next Games, while Rovio’s former executive vice president of games Petri Jarvilehto teamed up with the company’s executive vice president of strategic partnerships Andrew Stalbow to co-found a new studio Helsinki- and Los Angeles-based studio called Seriously.

This could be a drawback to the country’s newfound success in gaming, in that it could be much harder to retain talent in an industry that’s notoriously fickle. It could attract people that are more interested in the financial rewards of the gaming industry than the craft — something that we’re still seeing the effects of in the Silicon Valley community after the rise and fall of Zynga.

Some in the community worry that it’s getting too overheated:

Lasse Louhento, one of the Supercell co-founders who was the product lead on Clash of Clans, recently publicly complained: “The games industry is a hot and fierce topic and that worries me. I love the childlike passion to develop games. I yearn and miss people with vision and the attitude of never giving up to finish a game, whether it turns out to be successful or not. I don’t need lying networkers, mannequins who take credits from the real developers…. I miss the genuine doers, developers!”

But Paananen countered that if you run a studio with a supportive environment, you should be able to hang on to your talent.

“I am pretty sure that the small number of people who may join the industry just to make the quick buck will very soon realize how immensely tough industry this is, and they will leave as quickly as they appeared,” Paananen said.

“The vast majority of the local game developers do not think ‘money first,'” Paananen added. “I do not see this changing. Finns generally do not work for money anyway, so why should that change now that there is a bit more money available?”