Facebook is determined to be your top content discovery destination, so it’s making several tweaks to its News Feed including showing more links to articles, displaying a “related articles” box when you click those links, and bumping old links back to the top of the feed when friends comment on them. The goal is to make Facebook the hub for both news sharing and discussion.

Facebook says referral traffic to news sites increased 170% this year, outpacing its user growth. Still it’s up against serious competition in the news discovery space from specialty services like Flipboard, Prismatic, Circa, and others, as well as social networks like Twitter and Google+.

Today’s move could be designed to box them out. It also ties in with Facebook’s overarching initiative to become the global watercooler for real-time events. Facebook doesn’t just want to host random commentary, but link sharing related to big moments as well.

Specifically, in an effort to help people find more interesting news stories, it will show more news article links in the feed, “particularly on mobile”. It will also show a Related Articles box below links you click. This can show other articles by the same news outlet or that a related to the same topic. 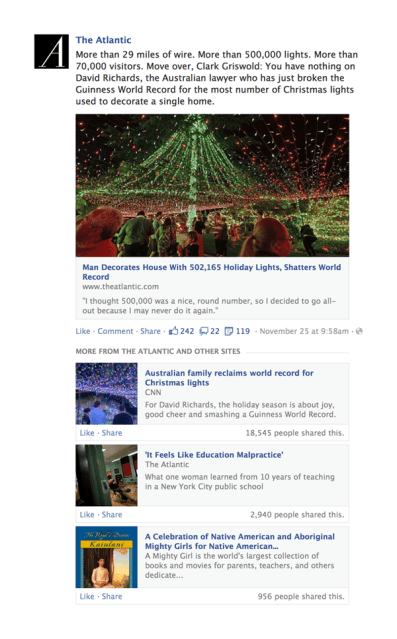 Facebook will also resurface links you might have already seen in the feed, but that have received new comments from your friends. Facebook believes the highest potential for engagement is not just in helping people broadcast news but giving them a place to talk about it.

Finally, Facebook also says it’s going to work on distinguishing between shallow meme posts and true news articles so there’s less click-bait in the News Feed. Facebook warns “This means that high quality articles you or others read may show up a bit more prominently in your News Feed, and meme photos may show up a bit less prominently.” That’s a big deal to content publishers who rely on Facebook for traffic. Facebook Pages may not be able to score as much easy visibility for their brands by just spewing Lolcats and other image macros.

While Facebook’s relevancy-sorted feed works fine for discovering evergreen articles and the big ideas of the day, it lacks the immediacy of chronologically-sorted real-time feeds that excel at breaking news. To win the news discovery battle, Facebook may need to devise a way to recognize and surface not just what content is the best, but what’s important right this minute.