The rising tides of online surveillance, and the lack of safeguards from governments to protect individuals against them, are having a disastrous effect on how the internet will grow and have an impact in the future — possibly even more than censorship, the inventor of the World Wide Web said today. Speaking at the launch of the Web Index, an annual piece of research from the World Wide Web Foundation that charts global online practices and Internet penetration, Sir Tim Berners Lee described the effects of surveillance as “chilling” and “insidious” (a word he’s used to describe the practice in the past, too).

Berners-Lee, however, dodged questions about whether he felt like he and other early internet pioneers could have developed things differently to put in better safeguards to protect from prying, spying eyes. Instead, he noted that people like Edward Snowden are an important part of how to change the direction information gathering has taken — implying that they should be held above existing laws.

“Everybody owes a lot to whistleblowers who have been involved,” he said, “because there is no way we could have become aware of it and had that conversation without the whistleblowers. [When] our system for checks and balances breaks down, we must protect and respect them.”

The UK and U.S. placed respectively third and fourth overall on Web Index leaderboard, which ranks countries’ “contribution to development and human rights globally.” The rankings take into account measures like Internet access; freedom and openness; relevant content; and empowerment.

Anne Jellema, CEO of the WWWF, noted that those rankings out today may look significantly different next year: the research was compiled September to September, meaning that it does not take into account many of the most recent revelations of how organizations like the NSA collect information.

The report notes that surveillance takes place in over 30% of the 81 countries examined in the report (termed as “moderate to extensive blocking or filtering of politically sensitive content”). Perhaps more alarmingly, surveillance is getting more sophisticated and inventive, with a growing trend of the use of seemingly “legal” cybercrime and antiterrorist legislation used to justify actions. The survey found that 94% of countries in the Web Index “do not meet best practice standards for checks and balances on government interception of electronic communications.” 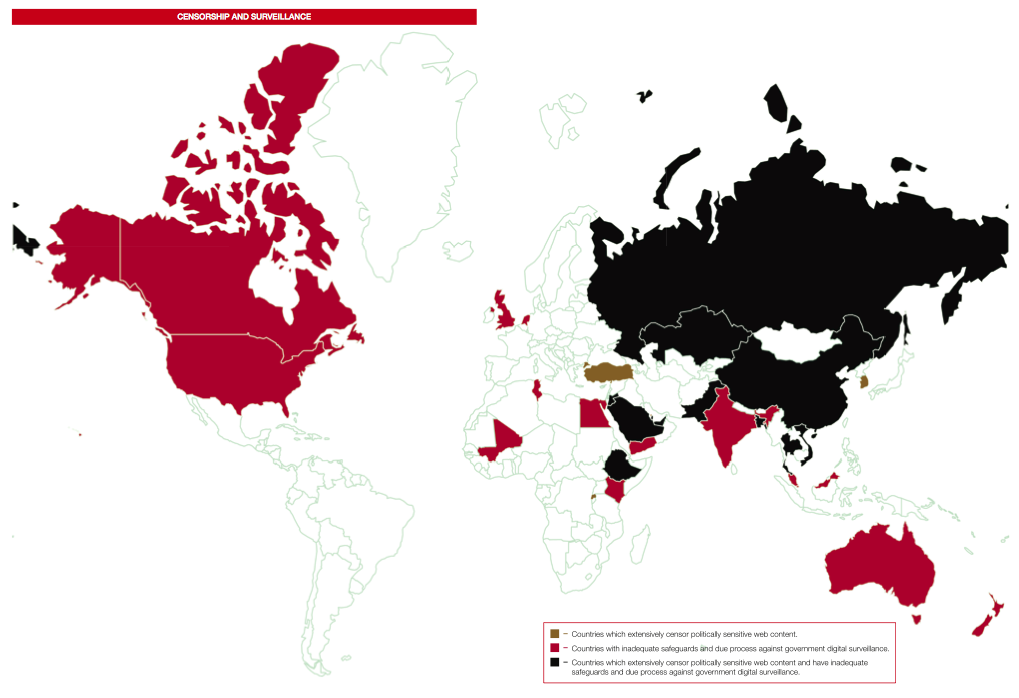 The ramifications of surveillance go beyond what it means in terms of groups like the NSA keeping tabs on what you do. The WWWF believes that growing distrust could potentially contribute to widening “participation divide” online — meaning people may have internet access but they will choose not to use it for positive ends like improving communication because of the negative aspects of using it.

Speaking at the launch of the report, Jimmy Wales, the co-founder of Wikipedia, also noted how the actions of democratic nations are having a wider impact in terms of permissiveness in other countries that have in the past demonstrated that they are more repressive when it comes to freedom of information. When he sits down with someone in China to tell them about how bad it is to spy and censor their users, he says, “it rings a little hollow when we do the same.”

One of the big issues with surveillance, Berners-Lee and Wales noted, is that it’s significantly more subtle than censorship.

“The things about the surveillance is that it is quiet and behind the scenes,” Wales noted. “It doesn’t affect your life. If the UK blocked a single page of Wikipedia people would be upset. But if you merely spy on what people are reading it’s subtle. But this stuff is going on and we have the power to stop it. We have the power to organise that.”

He also points out that “There is growing awareness among young people that privacy does matter. That’s why Snapchat is so popular,” he said. “I think we should use that.”

The full report shows Scandinavian countries dominating the top-10 rankings, as they have in similar evaluations made by organisations like the ITU. The Philippines ranked as the highest placed developing country overall. You can see the full report here.