Ask any startup or business what its top priorities are at any given moment and, more often than not, the conversation begins and ends with recruiting. In spite of this, recruiting and hiring top talent is a huge headache, the process is messy and inefficient, and most businesses stink at it as a result. According to Forbes, businesses in the U.S. spend close to $72 billion each year on recruiting services and products, yet 46 percent of hires fail within the first 18 months.

Rather than throwing darts, a new startup launching today wants to help companies turn hiring into a science. Using a combination of neurocognitive games, biometric signals and machine learning algorithms, Prophecy Sciences aims to help companies make smarter choices during the recruiting process. Of course, the real key to a successful hire is not simply locating the candidate with the best resume or most impressive credentials, although those certainly help. Ultimately, it’s about finding the person who’s the best fit for your team (and understands your company’s mission).

That’s why Prophecy Sciences starts with your team. The Y Combinator-backed company has created a 30-min sit-down test (which it also administers) that’s designed to measure the skill level, personality traits and interaction styles within working teams. Founded by Stanford neuroscience PhDs, rather than simply rely on Big Data or automation software, Prophecy Sciences wants to go deeper.

The test seeks to analyze the unique blend of chemical reactions, electrical impulses, reflexes and behaviors that make you who you are, and measure how you respond to group dynamics, before ultimately identifying trends between you and your colleagues. The idea being that the better it understands the patterns in how you and the team work, communicate and interact, the more effective it can be in helping you to find and place the right candidate — and optimize your existing teams, says Prophecy Sciences founder Bob Schafer.

For most hiring managers who continue to rely on a mishmash of static, one-page resumes, interviews and academic records to make hiring decisions, Prophecy Sciences is going to seem as if it’s from the future. To be fair, even for the most seasoned recruiter, it can be extremely difficult to judge a person’s interpersonal skills and ability to negotiate in a few interviews, which can make the process of hiring sales people especially difficult, for example. Furthermore, people being interviewed often just mirror the behavior of the hiring rep doing the interviewing, which may make them seem as if they know what they’re doing, when, in the end, they don’t. 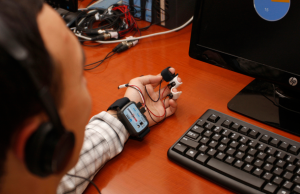 While we’ve seen a host of recruiting tools emerge of late, from Greenhouse to TheLadders founder’s new job matching project, Knozen, and there are a host of hiring assessment products on the market, Schafer says that Prophecy is the only one using biosignals and cognitive games. The other key to its defensibility is that the team has built its own hardware sensors that measure the biosignals used in its tests, sensors which Schafer tells us are patent-pending.

For now, Prophecy’s staff is administering the tests itself, and then sharing reports and visualizations on team chemistry and dynamics with the company to give a clearer picture of how their employees work together. Rather than relying on a one-size-fits-all personality test, eventually managers will be able to administer Prophecy assessments to their entire teams and view feedback themselves. But not yet.

Schafer tells us that, at launch, the company is working primarily with tech startups to help them hire salespeople, but it’s also working with companies in finance as well as several college and professional sports teams. As such, the founder says that Prophecy’s assessments and tools are meant to be generalizable — to work for any company and any role.

Since launch, the company has been working to streamline the assessment process and has it down to 30 minutes, with a few extra minutes required to set up the sensors and gear, Schafer says. It’s also developed hardware that’s far cheaper than what it was working with originally, scrapping what initially added up to a wrist band and a clunky receiver module to something that looks more like a wireless mouse.

With its new hardware, test takers will find themselves using a headset with built in infrared sensing, and rigged with gear that tracks eye movement, measures pupil dilation as well as heart rate and skin conductance, among other things. And the best part is that Prophecy measures your responses while you get to play games, the biosensors making inferences about your cognitive state and capacity based on a few games and a 30-min test. Not bad.

As to what this is going to cost your local startup? According to Schafer, Prophecy’s pricing depends on company size and whether or not they want to analyze certain candidates, their whole team and how deep they want to go. On their end, he says, the longer they can spend with a company, the better the results. Generally speaking, the startup charges “a couple hundred dollars per test,” and in the ballpark of $500 if companies opt to take full advantage of the startup’s suite of online dashboard tools.

It all sounds a little nerve-racking and time-consuming for employees, and one can imagine a little grumbling within the ranks should some overzealous manager decide it’s time for a better solution, but at the same time, it would stand to reason that Prophecy’s formula will eventually produce better matches. They’re still working out the kinks, but at launch, the solution already appears to be years ahead of the tools that the majority of hiring recruiters use.

The more the startup can turn hiring and recruiting into a science, rather than painting-by-numbers guesswork and turtle shell divination, the better off our companies will be and the more money Prophecy stands to make.