Today, Flickr is announcing the ability to order photo books directly from inside the photo sharing site. This continues a series of announcements and acquisitions which started late last year, and mark continued investment by Yahoo in rebuilding the once-dominant platform.

As one of the first sites to make photo uploading and sharing extremely easy, Flickr enjoyed an incredibly fruitful early period. But a lack of attention and resources led to stagnation as other sites and services swept in and began fighting to be the ‘one true repository’ of users’ online photos. Those competitors include products from a variety of spaces including Facebook, Google+ and Dropbox.

Since the revamp of its iPhone app late last year Flickr has seen a series of updates including a complete redesign of its web presence, the launch of an Android app and the ‘gift’ of 1 terabyte of free storage space to every user. It’s also acquired several companies in the space including Ghostbird, IQ Engines and LookFlow. Whatever commentary one has on new Yahoo CEO Marissa Mayer, it seems clear that she’s renewed investment in ‘Flickr as platform’. 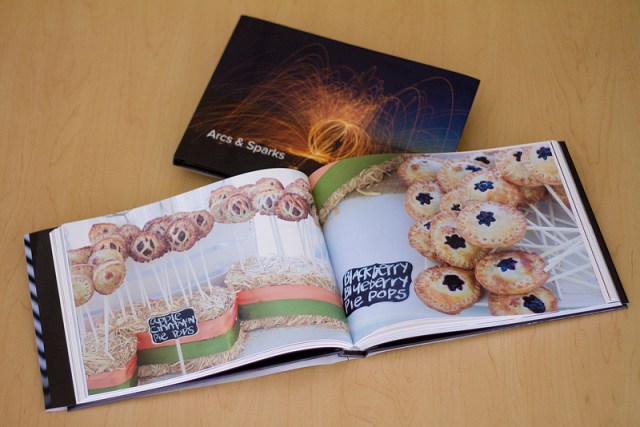 And that’s essentially what these new photo books are about. Flickr has previously allowed external sites to provide ‘Flickr enabled’ book creation, but today’s announcement is of an in-house tool.

“We’re working hard to make Flickr great again,” Flickr Vice President Tom Hughes tells me. This included working on easy to make photo books easy to use, with a quick clean experience. Usability lab testing was relied upon to make sure that the end result was smooth and simple.

To that end, the photo book process is extremely simple. You simply hover over a Flickr set and click create to generate a photo book. The layout is centered on ‘full bleed’ images as, Flickr Director of Product Management Rajiv Vaidyanathan tells me, they felt that ‘Flickr is all about photos’ and full-page images were the best way to show them off. 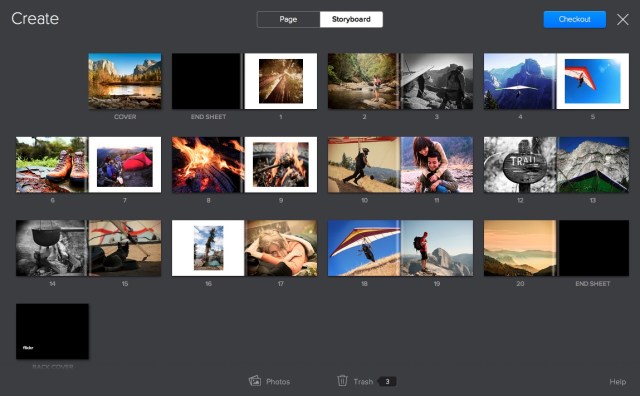 If you’ve ever built a photo book then you’ll know one of the biggest irritants is the ‘gutter’ or portion of the book that goes down into the binding. It often obscures points of focus or faces in the images. To prevent this, Vaidyanathan says, Flickr is using focus and entropy algorithms, along with face detection, to figure out what the ‘important’ bits of the images are, and cropping accordingly. This should ensure that faces aren’t too close to the gutter or edges of the book’s pages. If important stuff is close to both sides, the images automatically snap in from full bleed with borders that preserve those elements. 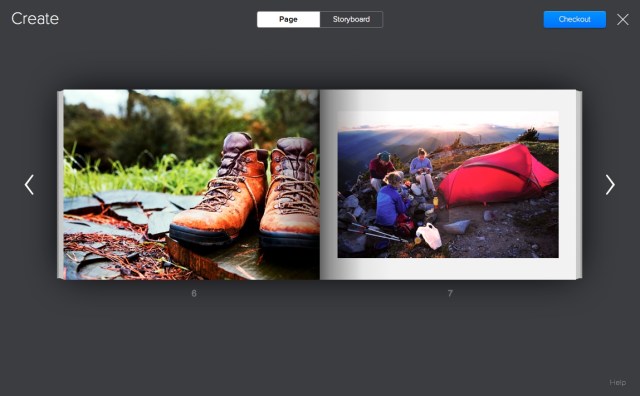 Vertical images are presented with simple borders. The books themselves are hard-cover with a printed image on the cover and a choice of black, white or color backs. The back colors are automatically sniffed out from the image you pick on the cover, allowing you to create a complementary back cover.

The storyboard mode will allow you to pick out individual images from your entire Flickr library and drop them into your book. You can also shuffle images around or ‘delete’ them from the book here.

The 8.5″ x 11″ books are $34.95 for 20 pages and 50c a page for additional sheets, which compares fairly well with Apple’s $29 price for iPhoto books. They’re printed on ‘photo electric’ paper, not true emulsion, but Flickr Head of Product Markus Spiering tells me that they’re ‘as close to photo quality’ as you can get without using photographic paper. They’ll all come with a printed dust jacket. For now you can order them from anywhere in the world, but Yahoo is only shipping them to the US.

The one hiccup that could hit this whole process is that it’s only really easy if you already have your photos organized into sets. The one-click nature of the books makes the process incredibly low-friction for ‘set users’, but it appears to be much less so with those who either automatically upload images with the Flickr apps or use the service as a repository for ‘all’ of their photos online. The automatic image grouping of Apple’s Photos.app or iPhoto apps, or Google’s Google+ Photos system seem like a natural mate to this kind of feature. There has been very little improvement in Flickr’s overall image sorting and grouping tools, even since Yahoo started paying attention again. There is a lot of manual dragging and dropping and tons of clicking around involved. The simple ability to craft automatic sets based on dates, locations, algorithmically detected subject matter or other factors could go a long way towards making ‘set based’ activities like photo books more widely adopted.

We asked for metrics related to the number of Flickr users that currently take advantage of sets but had not received a response at press time. Maybe it’s a ton of people?

Spiering says that the goal is to make Flickr the ‘home for all of the images you have’ again. Adding books to the product seems like a good step towards that goal, but the team might be well served to improve its automatic image handling and sorting as well. Still, the simple ‘one-click’ full-bleed books do look pretty nice.