Kabbage, the Atlanta-based company offering working capital to online merchants and sellers on marketplaces like Etsy, eBay and Amazon who wouldn’t otherwise be able to get a bank loan, is today expanding its business to mobile. The company is officially introducing its new apps for both iOS and Android, which will enable Kabbage users to quickly add funds to their associated bank or PayPal account while on the go.

The company had been quietly testing the apps with select users over the latter part of the year, and have now seen adoption from customers across 41 states. The iPhone app was actually introduced in September to a test market via an email invitation, while the Android version launched just a week ago.

Before being able to take advantage of the service on mobile, customers will have to register and qualify on the Kabbage website. In other words, mobile is not yet being used a way to attract new users, but serves as an extension of the company’s core product. However, that may change in time.

The company says it felt the need to move into the mobile space in order to offer more flexibility to customers, who are often out and about making deals or meeting with business partners.

In the apps, Kabbage customers can view their balance, make transfers, and select the amount of cash they need to fund a particular purchase or opportunity they may encounter while away from their PC. For instance, a seller might come across a deal on additional inventory while on a routine buying trip. Kabbage mobile apps would then allow them to access the funds they need to make that purchase in just a few minutes. (Kabbage says it can deliver up to $50,000 of funding in 7 minutes). 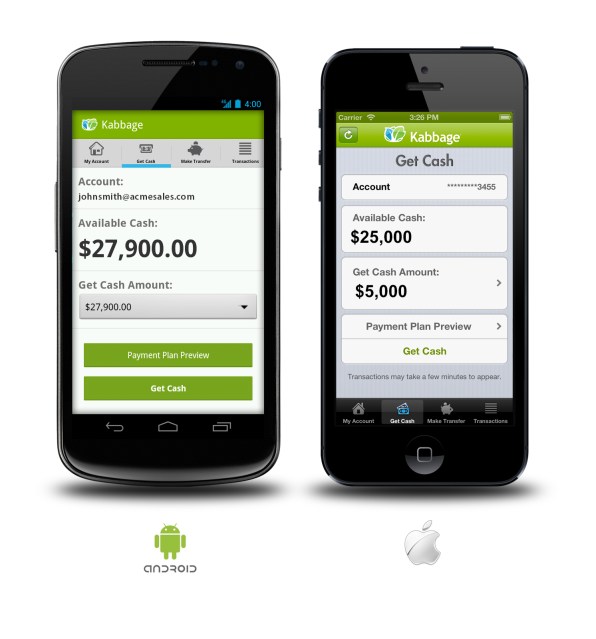 To qualify its customers, Kabbage uses dozens of data sources, including past sales, credit history, customer traffic and reviews, plus pricing and inventory compared with competitors, in order to determine a seller’s business performance and credit worthiness. The company, which competes with On Deck and Capital Access network, raised $75 million in debit financing this spring, to help the company scale its service to meet the needs of a growing user base.

The mobile apps for iOS and Android area available on the respective app stores here and here.