Payments platform Spreedly, which offers customers a credit card vault in the cloud that works with 54 different payment gateways, has just raised an additional $500,000 in seed funding from Emerge.be, bringing its total raise to date to just under a million. The funding comes not even a year after Spreedly’s pivot from a digital subscriptions service it sold off this July.

Spreedly has been around for some time. The company was founded in 2007, but had been focused on subscription-based payments until demand from customers found the team examining a new area involving payments: a cloud-based credit card vault and API platform for sending payments to multiple payment gateways.

In fact, a company called Pin Payments, basically the Stripe of Australia, funded Spreedly’s initial efforts in making this pivot, offering $120,000 in a seed investment last December. By March, Spreedly had its new service off the ground, and ended up selling its subscription business to Pin Payments, too.

A credit card vault, in simple terms, allows businesses to store a customer’s credit card information for repeated use. The ways this works is that a business will typically pass a credit card charge to a payment gateway like Stripe or Braintree, and that company then returns a token which the business stores. And when the business needs to run a charge again for that same customer, they send the token back the gateway for processing. The use of tokens is more secure, and allows for things like PCI compliance.

Developers use Spreedly by plugging into an API for storing cards in the cloud – that is, Spreedly returns the tokens, just as you would see with most payment gateways today.

But the difference is that Spreedly itself is not a payment gateway – instead, it allows developers using its API to specify which payment gateway they want to use for each transaction. 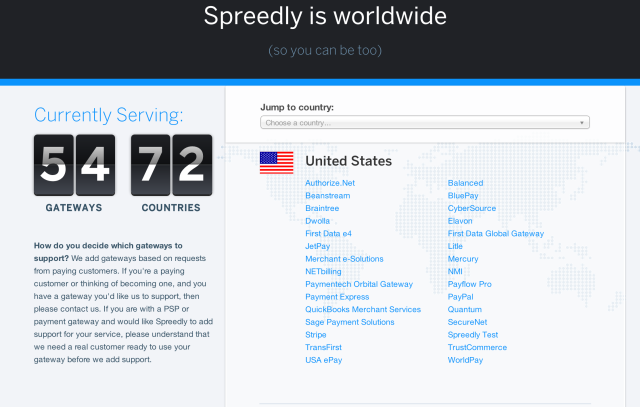 “On the front-end, we look like a modern payment gateway API, and developers really like that,” explains Spreedly CEO Justin Benson. “And then they just have to do one additional step,” he says, referring to the addition of the payment gateway. “We don’t touch the money flow – Stripe, Authorize.net – those guys do.”

There are a number of businesses that need to work with multiple payment gateways, Benson tells us. These include billing platforms, those in e-commerce space/subscriptions space, those selling into specialized vertical markets (Spreedly has found traction with companies selling to gyms/health clubs, in the vacation rental market; etc.), and companies which need to process transactions in different countries. In the latter case, the companies generally want to take advantage of the better rates and lower declines that come with using a local payment gateway.

Today, some of Spreedly’s customers include Cabify (an Uber-like service in Europe), PayByGroup, BusBud (an app that lets you buy a bus ticket across bus companies), Walla.by, and Giftcardzen. The company has 130 customers, and will do 125,000 transactions this month, totaling roughly $8.5 million.

Benson admits that most of Spreedly customers today are smaller startups, who pay for the service on a SaaS model starting at $50 per month and going up to around a couple thousand per month. But longer term, the goal is to grow Spreedly to the point where it could support much larger businesses. Some discussions on that front are underway today, he says.

The company connected with Emerge.be, a group of four angel investors in Belgium, on AngelList. The angels had been an earlier investor in Ogone, which was acquired this year by Ingenico for €360 million, so they are familiar with the space. They’re also investors in some potential Spreedly customers, like Cabify, which could help Spreedly’s business grow.

Durham, N.C.-based Spreedly is using the additional funding for product development and hiring, with plans to grow its four-person team to seven with the hire of its first sales person and two engineers.

The company also offers a useful Payments Gateway Index (pictured above) in partnership with Shopify, which lets you track metrics associated the various gateways on its platform, including success rate, volume, average ticket size, and more.