Startups and PR firms have long had a halting, if not embattled relationship. Spend time talking to entrepreneurs and those working at startups, and it won’t be long before you encounter the nagging mistrust founders have of PR firms and the PR process.

That’s why AirPR, the PR marketplace and technology platform, is launching a new analytics platform that aims to restore some of that trust — or at least give companies and their CMOs a greater degree of insight into both the value of PR and how to increase PR performance.

But let’s step back for a minute and ask: Why is it that, generally speaking, entrepreneurs mistrust PR and often end up unhappy with the PR process — and performance? Well, on the one hand, that’s because, frankly, public relations and communications aren’t skills entrepreneurs necessarily have in spades or are comfortable with (and vice versa). On the other hand, as Zaarly co-founder Eric Koester wrote in a recent blog post, boiled down, startups are all about math. Simply put the job of a founder, Koester says, is to make a simple math equation work: R > E.

“You need to show how you can make the revenue you earn from a customer exceed the expenses you incur to get that customer,” he writes. It’s for this reason, among many others, that most founders not only pay attention to math, they’re datavores. The prevailing psychology, especially in a highly technical world, is that if you can’t measure and quantify the value of some activity or spend for the business, it’s not worth pursuing.

So, why is there a sense that entrepreneurs struggle to find good PR firms? Well, startups, and particularly the founders and CTOs of tech-focused companies, aren’t always the most “outward-facing” people to begin with. Couple that with the fact that — and take this from someone in the media — good PR people can be hard to find, and you’re already halfway there.

On the other side, entrepreneurs are already data and metrics-focused, so unsurprisingly, they have trouble seeing the value in spending money on a PR firm. Why? Well, if it’s an early-stage startup, capital is tight to begin with, but, really, it’s the fact that the PR process is largely opaque. Traditionally, it’s been difficult, if not impossible, to effectively measure Return On Investment (ROI).

In the past, PR firms and startups have used “advertising value equivalency” as a placeholder for measuring media coverage compared to a particular publication’s CPM or CPI rates — or the functional equivalent thereof. But this really isn’t the most effective benchmark.

If you haven’t already fallen asleep, this is the thought process that led Sharam Fouladgar-Mercer to create AirPR in the first place. The startup’s initial product, as we wrote in June, was a kind of “Match.com for PR.” In other words, AirPR offered a marketplace designed to match top, pre-screened PR talent with tech startups looking for (and actually able to pay for) representation that makes sense for them given the story they’re looking to tell, funding, stage of development and so on.

Since then, AirPR’s marketplace has served as a testing ground that has allowed it to observe and collect loads of data on how startups are approaching the PR process, what they want help with and, ultimately, how effective PR is at meeting its goals, costs, publications they want to speak to and so on. Apply the insight and trends from this formula at scale (over time) — now that the company has had 2,000 companies cycle through its marketplace and hosts anywhere between 50 and 75 active PR professionals at any given time — and one begins to see how this presents the opportunity for a real business.

Over the last six months, AirPR has worked to productize this data-driven insight into the PR process, ultimately resulting in an analytics platform that can potentially help PR professionals and companies alike measure the effectiveness of their campaigns. Launching this week, AirPR “Analyst” as it’s being called, attempts to enable companies to track PR efficacy at a more granular level — all the way down to revenue impact. 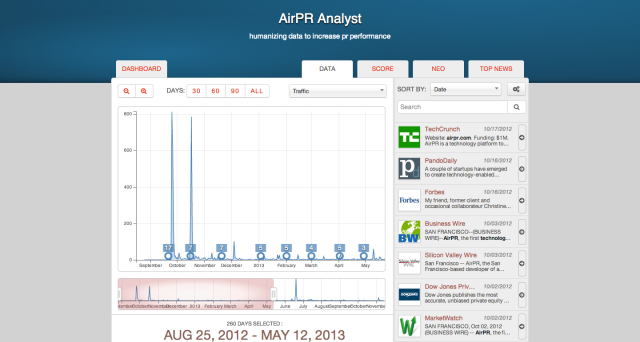 At a high level, the product measures a PR campaign’s web traffic, the number of articles to result from it, social media conversion, performance of core messages and how online interactions drive company sales.

The product allows companies to view this information, segmented by engagement, awareness and optimization, in a single dashboard. Sounds like your friendly neighborhood analytics tool, doesn’t it? And, really, that’s the idea — a kind of enterprise-focused Omniture or Mixpanel for PR. Depending on the pricing plan and customization companies choose to pursue, they can also compare their metrics and performance to their competitors.

To put this in context, well, the PR industry really hasn’t had much of a relationship with analytics, historically. Fouladgar-Mercer says that whereas marketing clouds like Vocus and Cision offer PR monitoring solutions, AirPR Analyst can be the first big data analytics approach to measure effectiveness down to real value.

“The only thing missing from the large marketing clouds of Adobe [read: Omniture] and Salesforce is PR,” the AirPR founder contends. And, while you can rarely trust a founder to be honest in the assessment of their own company, he has a point there. Every company has a line item for advertising and PR spend, and thanks to giants like Omniture, most companies know exactly how an increase or decrease in that advertising spend effects its bottom line.

“For PR,” Fouladgar-Mercer explains, “it’s still pretty much a black box.” Companies have very little sense of the degree to which tweaking PR spend positively or negatively affects their core business metrics and their bottom line.

The other approach that could end up working in the startup’s favor is that, while it’s initially targeting the enterprise and large brands, the long-term goal is to increase PR performance for companies of all sizes. And if the CEO is correct and AirPR is first to market with this, then it won’t matter. But the feature of AirPR’s product that could have the most appeal for companies? It takes less than 30 minutes to setup and integrates with the majority of existing analytics providers, the founder claims.

In other words, without the spin, AirPR needs to start generating some revenue from more lucrative enterprise-size contracts and, once it does, it will work downstream to startups. Sure, it’s Goliath over David, but that’s the approach that 99 percent of founders would take. Plus, for smaller companies, there’s always the AirPR marketplace and, at some point in the not so distant future, they’ll get access to Analyst as well.

When asked about her experience working with AirPR’s new product, “Your Network is Your Net Worth” author and former Virgin America Marketing VP Porter Gale sums it up nicely:

One major misconception about PR is that it’s not a driver of revenue and sales … Some people think of PR as solely a brand awareness builder, but time and time again when the press writes a story about a company, sales tend to go up. With AirPR Analyst, marketing executives, and comms teams can track important metrics and tie them to specific business objectives.