Yahoo has posted an interesting little tidbit on its tumblr today, announcing that it’s going to be auctioning off a bunch of premium domain names that it has been holding onto.

The domains, which Yahoo has accumulated over years in the ‘portal’ business, include gems like ‘sandwich.com’, ‘av.com’, and ‘crackers.com’. Judging by the auction price ranges, which are between $10,000 and $99,000 for most domains, Yahoo looks to net several million from the sales if they all go.

“When you’re a company that’s been around as long as Yahoo, there are lots of fun things that you stumble across,” says Kevin Kramer, Yahoo Deputy General Counsel. “This year, we found a huge list of domain names that the company has owned for quite some time. As we discussed what to do with them, it became obvious that it was time to set them free…back into the wild of the Internet. ” 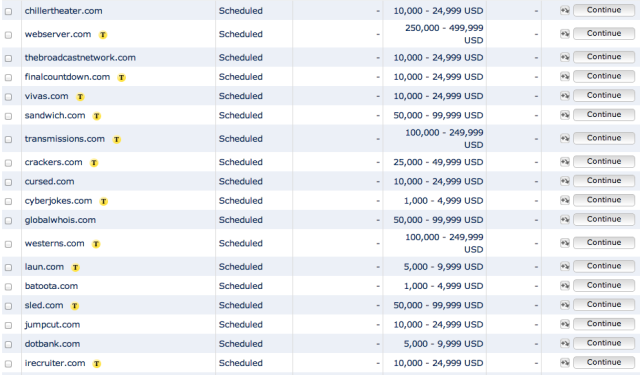 The list of domains also includes some real head scratchers, including ‘fonzo.com’ and ‘mym.net’. The list will go on sale on the 14th and the auction will run through the 21st. Yahoo says that more names will be added to the list.

Now maybe some new startups can afford to buy themselves some vowels again.