Ever since Karen X. Cheng was young, she exhibited a kind of bull-headed determination to reach any goal.

First, it was learning how to spin notebooks on the tip of her index finger, like all the cool boys in junior high school.

Then there was a ridiculous resignation video where she quit her job as a program manager at Microsoft with a YouTube rendition of “Bye, Bye Miss American Pie.” She had taught herself UI design while working full-time on the job, eventually landing a job at Justin Kan’s Uber-for-cleaning-and-errands startup Exec.

Then a little over a year ago, she picked up dance. It became an obsession, with practice sessions sometimes for several hours a day and lessons with professional vogue and robot dancers. At first, it was awkward and painful, but she got better.

“People who watch me dance today sometimes assume I’ve been dancing for many years. I made this video so you could see the awkward body that started just one year ago.

Here’s my secret: I practiced everywhere. At bus stops. In line at the grocery store. At work — Using the mouse with my right hand and practicing drills with my left hand. You don’t have to train hardcore for years to become a dancer. But you must be willing to practice and you better be hungry.”

With that, she released a video called “Girl Learns To Dance In A Year,” that showed her journey and development as a dancer from day one. It quickly went viral, accumulating 3.5 million video views.

Hundreds of e-mails poured in. A woman in her 50s named Cynthia from Chicago wrote about her own personal struggle to walk again after the onset of multiple sclerosis.

That created a germ of an idea. What if there was a way for everyone to show their learning process honestly and transparently? A way to see that even great artists and dancers all begin from somewhere?

Cheng had resisted the idea of doing a startup for years after watching mentors and friends deal with the ups and downs of running a company.

So she teamed up with another engineer, Finbarr Taylor from Exec, and started GiveIt100.

It’s a video-centric site where anyone can document themselves learning a new skill, whether that’s building a racecar, learning how to make weird bodily noises or unicycling. 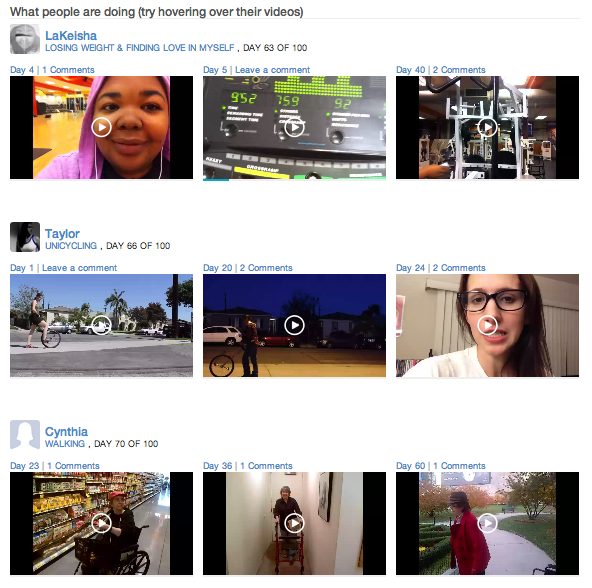 The site asks for a commitment: people upload short videos of their progress every day. You can create montages or get feedback from a supportive community.

Already, Cynthia is on her 70th day of recording her journey toward walking again. At first, you see her lifting leg-weights, then walking down her hall. Eventually, she started walking outside in a park.

“This is one of the places where mistakes are celebrated and mistakes are OK,” she said. “If you post yourself sucking at guitar on YouTube, the response is not going to be good. But this place is about a work in progress. It’s not about your final performance.”

While the site is just in its infancy and is coming out of beta this week, Cheng says she has many ideas for how to make it a business. They could do gamified advertising where people who are learning guitar could unlock achievements or discounts if they make it to their 10th or 50th video. They could also run competition or contests with sponsored rewards. Then naturally, there’s the ability to make it a marketplace where students could be connected with coaches or tutors.

She said that the kind of people attracted to GiveIt100 are ones who would be committed to doing something for 100 days straight anyway.

“I want to create a place where you can see all the hard work behind the magic,” she said. “Right now, you see Michael Jordan or Zuckerberg. They’re supernatural. You can never see them when they started, when they probably sucked.”

She added, “So I want people to see that beginning moment. I would love to see the next Mark Zuckerberg or Tiger Woods on this site today, so that people who look up to them can see them every step of the way.”