Line, the messaging app that blew up in Japan over the past two-and-a-half years, is now bringing in nearly $100 million in revenue a quarter.

The app, which is a subsidiary of its parent company Naver, said it brought in 9.9 billion yen ($99.9 million) in net sales for the quarter ending in September. Overall revenues, which include the amount that Line has to pay out to the app stores and developers, has more than doubled in the past six months to 15.6 billion yen ($157.6 million).

While there have been reports in local newspapers about an impending IPO next year, the company remained quiet on the subject in an interview on Friday. But we separately hear from investor sources closely connected with the company that they are considering an offering in mid-2014.

“Of course you’re going to ask questions about an IPO,” said Jun Masuda, who is the chief strategy and marketing officer for LINE. “It’s a strategy we’re thinking about, especially looking at services like Twitter. But at the current moment, we don’t believe that it’s something that we have to do right away. We currently have enough cash and we don’t have a pressing need to do an IPO.” 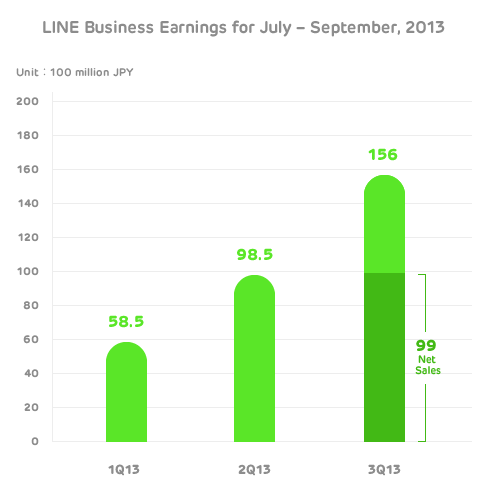 Line has seen an astonishing rise for a skunkworks project that came out of Naver, which is the company behind South Korea’s big search portal of the same name. From its launch shortly after the devastating 2011 earthquake that crippled the Fukushima nuclear power plant, Line has accumulated 280 million registered users worldwide. They have never shared figures on monthly active users.

The app has totally saturated Japan with 49 million registered users and completely upended the mobile gaming market in Japan, undermining the historical power of gaming platforms like DeNA’s Mobage network and GREE. These two companies ruled in the feature phone era, but DeNA has now seen its shares slide 32.5 percent while GREE shares have fallen 41.5 percent over the last year. Line’s rise, along with that of other apps like Tencent’s Weixin (which has 236 million monthly actives), shows just how volatile the mobile social networking and messaging space continues to be.

Now Line is picking up momentum in the gaming space, with 39 published titles and deals in the works to bring more third-party games from abroad over into the Japanese market. They recently closed a deal with Finland’s Boomlagoon, a studio from a team of former Angry Birds developers.

Before adding a games platform, Line had aggressively pushed stickers and sponsored accounts for revenue. (Stickers, notably, were copied by many other Western rivals like Facebook and Path).

But now, the key part of Line’s massive revenue growth now is in gaming. The games part of Line’s business now makes up 60 percent of their revenue, followed by stickers, which make up another 20 percent of their sales. Then there are sponsored accounts and merchandising, which is pretty minimal. Their gaming-centric strategy closely follows what neighboring South Korean messaging app Kakao did in coming to dominate Google Play’s charts. Kakao publishes all 10 of the top 10 grossing titles on Google Play in the country, according to App Annie.

Like Facebook, which also saw rapid gaming revenue growth in the early days of launching its platform, Line wants to be much more than a games distributor. They see themselves as a communications platform, which they believe will them more durability than games-only platforms like DeNA’s Mobage and GREE.

“There’s a fundamental difference between companies like us and Mobage (DeNA) and GREE,” he said. “Their SNS (social networking services) were based around games, so it was easy for users to quit the service quickly. But Line is based around communication. Users use it every day for free calls and messaging, so we think our lifespan will be longer than former SNSs.”

Next, they’re considering building some type of e-commerce service or marketplace, handling both consumer-to-consumer and business-to-consumer transactions. That could create competition for giants like Rakuten and scores of other small e-commerce startups based in Japan.

After saturating Japan, their big growth markets are in countries like Taiwan and Thailand. Then they’ll be looking at Spanish-speaking or Latin American markets like Mexico, Spain and Brazil for growth.

The U.S. remains a tough and incredibly competitive market, even though they’ve hired local U.S. executives and partnered with artists like Snoop Dogg to grow an audience there.

“We’ve considered strategies to enter America for awhile, but it is a very difficult market at the moment,” Masuda said, declining to share how many U.S. users the app has.

He said despite upstarts like Weixin or WeChat, the venerable WhatsApp is their strongest rival, especially in growth markets like India.

“You’re able to use that app in areas with poor network connections or on smartphones without very high specs,” he said.