Yesware, an email productivity startup for salespeople, which just this fall raised an additional $13.5 million in Series B funding, has made its first acquisition. The company is acquiring the email file-sharing startup Attachments.me, which is also officially shutting down as of today. The entire five-person team from Attachments.me is joining Boston-based Yesware, but will remain in San Francisco, effectively establishing a new office for the company in the area, where Yesware reports a growing customer base.

Attachments.me, for those unfamiliar, was working to make it easier for users to find and securely share files, send large attachments, and track file openings, among other things. The startup had raised $2.5 million in funding from Foundry Group, also a Yesware backer, which is also how the two companies’ co-founders initially met. Around four months ago, discussions about working together came about, as Attachments.me hit a fork in the road.

At the time of the deal, Attachments.me had just under 310,000 registered users and around 60,000-80,0000 monthly actives, but was having trouble growing revenue.

Attachments.me CEO Jesse Miller said his company had “missed the mark on the initial monetization strategy” and knew that it was going to make a shift in any case. “We were exploring that, and because of what we had raised, that would have meant a different funding strategy,” he admits.

The company had some traction with real estate pros, recruiters, and small law firms, and was offering a couple of low-priced plans (under $10/month) for individual users, and custom pricing for teams.

“In hindsight,” says Miller, “we should have focused completely on the teams.”

After exploring the option of joining Yesware, Miller found the company to be a good fit in terms of product and culture. And while the team had at least two other similar offers on the table, Yesware was the one with the most appeal. Neither company is discussing deal terms, but Miller says that Attachments.me hadn’t run out of money, and investors are getting a return. “Everyone’s happy,” he says.

Attachments.me had already announced in a blog post dated October 28th that the service would be shutting down, noting that paying users would receive a prorated refund, and those who upgraded through the iOS app could request a refund through iTunes. 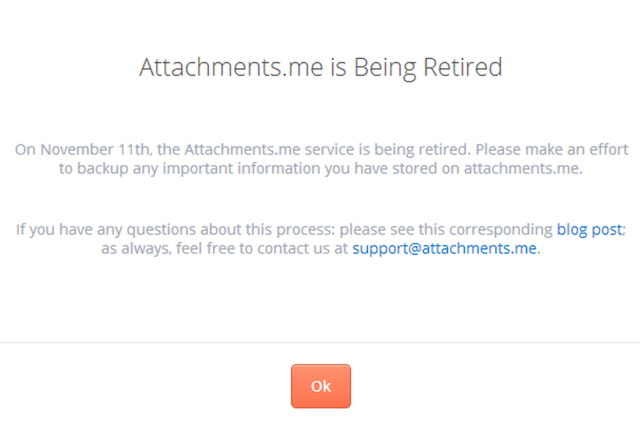 The post also pointed to Yesware as an alternative to Attachments.me’s download tracking feature. In the comments section, Miller said a further explanation would come in a few weeks’ time.

“More Than An Acqui-hire”

Matthew Bellows, Yesware CEO, describes the deal to acquire Attachments.me as more than an “acqui-hire,” despite the fact that only some of the technology will make its way to Yesware going forward.

“The people are awesome, and they’ve proven they can build amazing products in Gmail and mobile,” says Bellows. “But they also bring a bunch of technology for changing the way Gmail works…if you think about attachments and how salespeople use attachments, you can imagine that [Attachments.me’s] approach and understanding would be helpful for improving salespeople’s performance,” he adds.

Yesware, too, has been growing its user base over the past few years, now reaching some 360,000 customers, up from the 300,000 users reported in September, at the time of the Battery-led Series B round. But unlike Attachments.me, revenue has been growing too, increasing by 17 times over last year.

With the new San Francisco-based arm of the company, Bellows says the plan is to hire more Bay Area staff, particularly “customer confidence advocates” with enterprise experience, and additional mobile engineers – which Yesware needs to do quickly to meet customer demand for a mobile solution, expected next year. 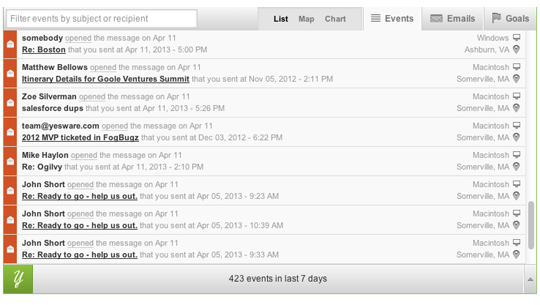 “That’s not a reason to do this deal, but it is icing on the cake,” he adds.