We’ve seen more than a few startups cook up their own impressive 3D scanners — there’s Makerbot and its Digitizer, and dark horse Occipital with its mobile Structure sensor just to name a few — but one of the oldest and biggest names in 3D printers is clearly itching to get in the game too. South Carolina-based 3D Systems just recently outed a cheapish, consumer-friendly scanner called the Sense, and I swung by Engadget’s Expand show in New York this weekend to see the thing in action.

Here’s the TL;DR if you’re on a tight schedule: at $399 price is right and I came away awfully impressed with the little thing. And I do mean little, as 3D Systems concocted a portable affair that’s about the size of a small hardback or staple gun. Thanks to a plastic chassis it’s not much heavier either, which only makes sense given how you’re actually supposed to use it.

You see, while more buzzy players in the space like Makerbot have opted to run with a restrictive turntable design, the Sense is meant to be clutched firmly in your hand as opposed to be passively propped up on a desk. Once the companion software is installed on a connected computer, all that’s left is to just stand around your subject and slowly wave the Sense around until you’ve captured everything you wanted to. And thanks to that persistent tether to a PC, users can monitor a real-time visual representation of the scan in progress.

So yes, it’s handy. Naturally that wouldn’t make a lick of difference if the Sense didn’t deliver on its promise, but it certainly seems to get the job done with aplomb. If you’ve seen a 3D scanner in action, then you’ve probably got a pretty firm grasp on how these things work: a camera and an infrared sensor capture an object’s visual and geometric features and converts them to a 3D model. Thanks to a sensor array sourced from the folks at Primesense, the Sense is capable of scanning objects that measure up to 10ft by 10ft — at long last you can craft a digital representation of that lovingly battered couch in your basement. 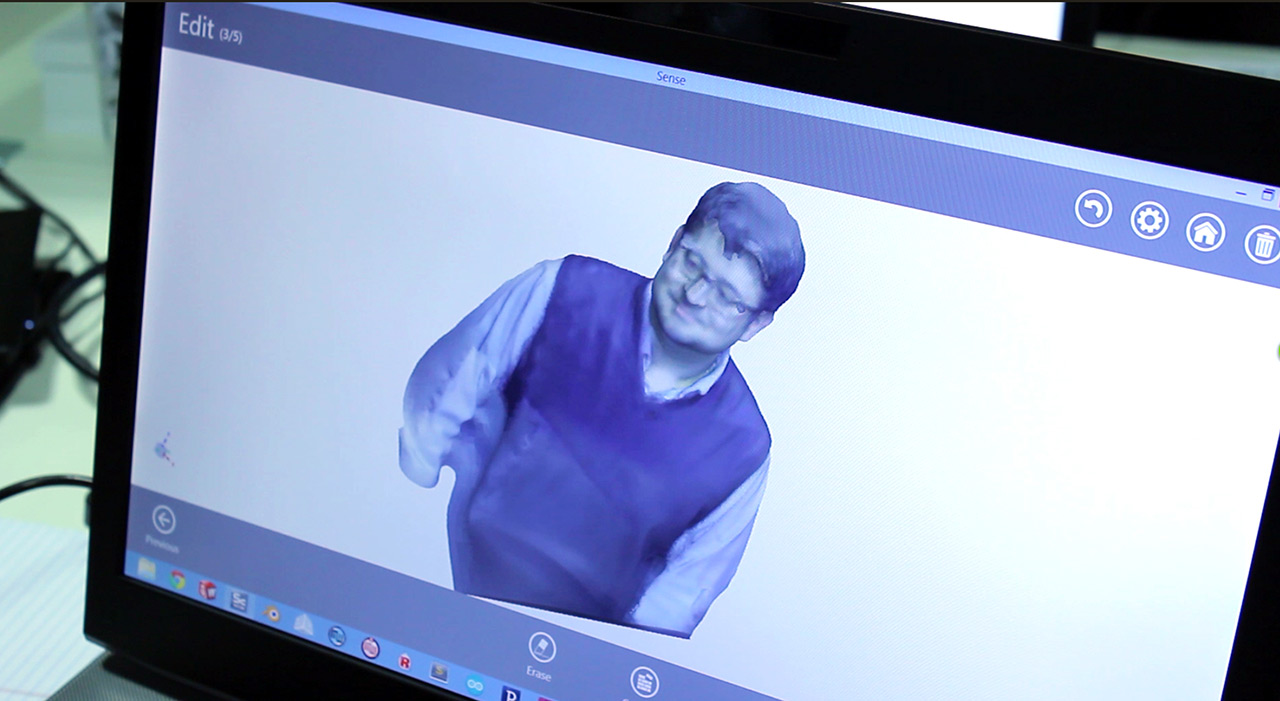 And how do the resulting scans look? That all really comes down to you. The scanning process rewards slow, methodical motions over swish-and-flick Wingardium Leviosa antics; being a little too hasty with your hands only heightens the risk of introducing faults and aberrations to the mix. Thankfully, the software that ships with the Sense is smart enough to smooth over some of those minor issues as they crop up, and it only takes a few clicks to take that model and solidify it into a structure suitable for printing.

But here’s the most curious thing about the Sense: everything from the price point to its no-nonsense design to CEO Avi Reichental’s address laden with social media friendly instances of “Sense speak” make it clear that 3D Systems is still intent on trying to crack the consumer market. That’s not exactly unfamiliar territory for the company — it started rolling out a line of consumer-centric 3D printers two years ago, but the cheapest of them still costs a whopping $1,299.

That stands in stark contrast to the hefty price tag of Makerbot’s flagship Replicator 2, but even that lowered price barrier is enough to ensure that mass-market adoption of 3D printers (and the devices that support them) is still a ways off. As whiz-bang neat the notion of printing out replacement everythings in the comfort of your own home is, I’d argue that no one has yet made the Model T of 3D printers — a product that represents just the perfect confluence of price and performance that gets people really thinking about how their lives could be improved (if at all) by throwing on-demand object production into the mix.

The prevailing notion among 3D printing buffs, though, is that it’s only a matter of time before someone cracks the printer code and the rest of the world begins to open its collective eyes to the wonders of extruded plastic and laser sintering. And once that happens, the value of devices like the Sense will become staggeringly clear — they aim to address the 3D printing content gap. After all, if all of this is really going to become the domain of the average user, those users are going to need the digital schematics of things to print without having to bother with complex software suites. By making it strikingly simple and pricing it to move, 3D Systems is trying to coax people into filling that content gap right now so everyone can catch up just a little bit sooner.

Is the Sense by itself going to single-handedly change how actual normal people (as opposed to, unrepentant nerds, optimistic near-futurists, and John Biggs) think about 3D printing? Probably not. But it’s a step in the right direction, and with any luck the Sense and its low-cost ilk will be a harbinger of better 3D printed days to come.