The Web fundamentally changed how people consume the news. On the one hand, it’s now easier than ever before to create and distribute content to millions of readers; on the other, the Web has become an ocean of content and information, and it almost goes without saying that it’s now more difficult than ever before to locate the signal amidst the noise.

Given the dizzying amount of content and news sources out there, most people now just fall back on their social networks to act as the filtration system that helps them find what they want — Facebook for friend-sourced news, LinkedIn for business-related content, an so on. Going one step further, thanks to Flipboard, Feedly, Circa, Techmeme, Prismatic, Nuzzel and more, there are now a million ways to access filtered news on our phones or based on our relationships, interests and so on.

Axel Hansen and Jonah Varon began building Newsle as undergraduates at Harvard to fill a nagging gap among today’s news aggregators. The idea being that, as popular as Google Alerts may be, people want to read news based on who their friends and colleagues are and who they want to know more about. But, from Varon and Hansen’s vantage point, the existing options didn’t go far enough, so they decided to build one that would.

Today, Newsle’s network (and person)-oriented news alert service tracks more than 100 million people and processes more than one million articles each day from over 100,000 sources, serving users filtered, personalized alerts based on their preferences. While that scale is impressive, building a great news aggregator isn’t just solving the problem of scale, it requires both scale and awesome filtering mechanisms that work well enough that they can hold a user’s attention when there are a million other tools that can be used. 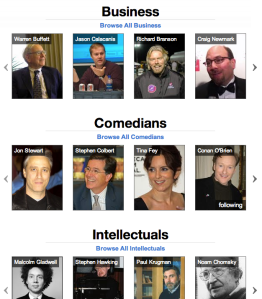 That’s why Newsle prides itself on not only processing enough news so that it can bring you stories from sources you actually care about, but the person identification, natural language processing and disambiguation algorithms that help it serve better alerts.

Since launching in 2011 and moving operations from Harvard to San Francisco, Varon and Hansen have managed to keep Newsle afloat with a team of five and $650K in seed financing they raised in early 2012 from SV Angel and Lerer Ventures. Newsle has even had its tires kicked by a few recognizable names in the news business, although the startup declined the offers, and naturally Varon also declined to specify which players those offers came from.

Nonetheless, having build what they believe is a solid foundation on which to create the next big news aggregator, the co-founders are eager to stay independent and are looking to expand their natural language processing and data mining efforts with new talent. With its user base now growing 20 percent month-over-month, Varon says, Newsle is adding some coin to its coffers to help it take the next step.

This week the startup finally closed a $1.85 million Series A financing round led by Advance Publications, the veteran media company, which owns a sizable fleet of newspapers and magazines, including Conde Nast and a 31 percent stake in Discovery Communications.

Participating alongside the strategic investor were Maveron, DFJ, Transmedia Capital, Launny Steffens and previous investor Rockwell Schnabel. The news of the startup’s Series A raise first appeared in May, but the company has brought in additional capital and investors since, including Bloomberg Beta. The investor, as its name would imply, is the new early-stage investment fund and venture capital arm of Bloomberg, which launched this summer and is headed by OUYA chairman and former head of IGN, Roy Bahat. Newsle also happens to be the fund’s first investment, Varon says.

In the end, strategic investment from two enormous media companies — or at least their VC affiliate — could be a huge leg up for Newsle, especially with Advance Publication’s giant network of news content. This could make tackling seemingly huge problems on the technical side of personalized news discovery, like better disambiguation — in other words, being able to determine which “John Smith” a user wants to hear about — a lot more manageable.