There are a number of apps out there seeking to displace SMS as the primary mode of communications between mobile users — there’s MessageMe, Line, WeChat, WhatsApp and others. And, of course, there’s Snapchat, which has built a big, booming following around photo messaging. Well, there’s another new messaging app out there called Context, which seeks to streamline the way users communicate what’s going on around them through that it calls “Simple, Fun Photo Texting.”

Context isn’t exactly a photo-sharing app, per se… although photos are a big part of what draws users to it. Unlike other messaging services in which photos are a part — think Snapchat, for instance — you’re not taking or uploading the photo first. Instead, users first enter the text they’d like to share. Then, once that’s done, they take a photo which, uh, provides the ‘context’ to what they’re saying, doing, thinking.

For those of you who use Snapchat as a sort of SMS replacement, shamelessly snapping selfies and accompanying them with news of the moment*, Context might provide a more seamless, and possibly more gratifying, way of communicating with others.

It might not have the coolness factor of those self-destructing, ephemeral messaging apps — everything is on the record, with a photo-by-photo slideshow of your communication instantly available. For users who want the instant gratification of banging out a message and instantly sending a photo along with it, Context provides drop-dead simplicity.

In an era where users are used to perfecting the moments that they share with other through filters (a la Instagram) or happily seeing those moments slip into the ether (via Snapchat), the idea of spontaneous, unvarnished moments that are with you forever seems a bit of a novel concept. 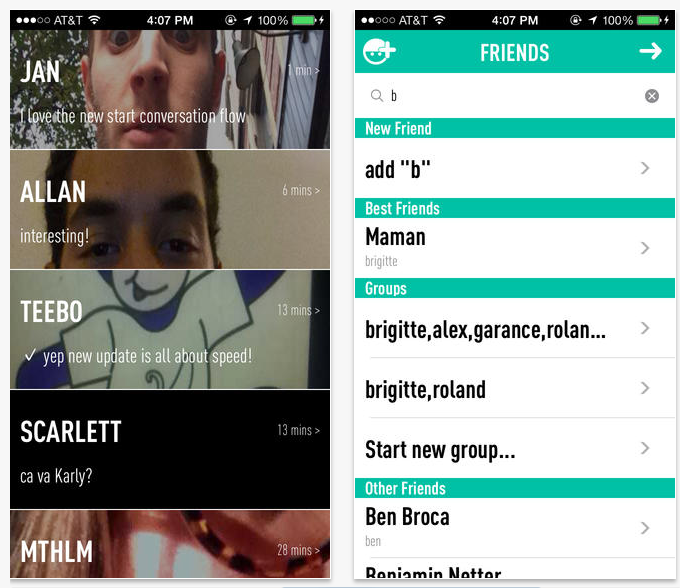 That might be why it’s captured the interest of early users, many of which are using it every day, essentially as a replacement for SMS conversations, according to co-founder Ben Broca. And while it’s mostly flown under the radar, I’ve also seen a few top investors playing around with it over the past several weeks.

Broca had previously built Now, an app that scanned Instagram to help people find cool things happening around them. But he shifted to building the messaging app just a few months later.

That said, Context does borrow some of the same design philosophy of Now. Most notably, it uses the same font — which Broca points out conveys a sort of novelty and quirkiness to the app. You know, instead of just using Helvetica, which every other messaging app seemingly uses.