Zoomingo, a two-year old shopping and deal-finding app designed for use out in the real world, has raised an additional $1.25 million from its existing investors Benaroya Capital and Naya Ventures, along with other angels, including Rudy Gadre, former General Counsel at Facebook. The new funding brings Zoomingo’s total raise to date to $2.75 million.

Alongside the investment, the company is also announcing an agreement with Simon Malls, which will promote the Zoomingo app in select Washington and California malls. According to a spokesperson at Simon Property Group, which owns over 300 malls in the U.S., this rollout is more of a test of the Zoomingo app at this time. The app will be promoted using in-mall and digital promotions, and Simon Mall shoppers will receive rewards for visiting their local malls in the form of ZPoints (redeemable for gift cards) as well as gifts from mall retailers.

These rewards help brick-and-mortar businesses fight back against the ever-growing e-commerce threat, with tools beyond just price matching to encourage shoppers to spend in-store.

“The great thing about Simon really understand how important mobile has become,” says Zoomingo co-founder Shirish Nadkarni, of the deal. Simon Malls also recently invested in another mobile shopping app, Jifiti, which will be promoted in over 100 or so Simon Malls. And the CMO of Simon Property Group, Mikael Thygesen, sits on Jifiti’s board.

But Nadkarni says he doesn’t really see Jifiti as a competitor since they’re focused on gifting, which mainly happens at certain times of the year. “Zoomingo, on the other hand, is an app that shoppers can use throughout the year and we can play a critical role in helping them find great deals whether it is for themselves or for their family or friends,” he adds. 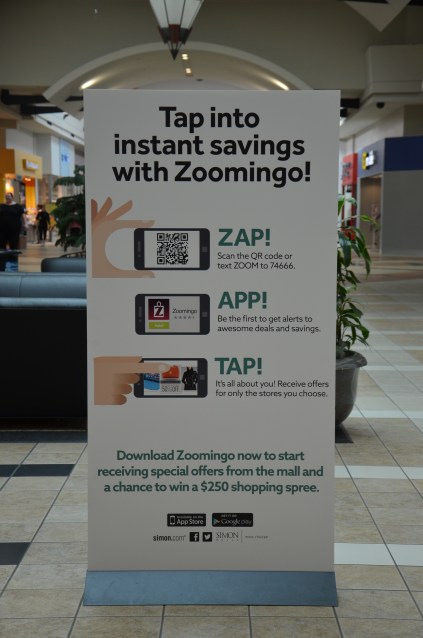 The Zoomingo application, which was founded by Nadkarni and Krishnan Seshadrinathan, who previously founded language learning platform LiveMocha, was inspired by Nadkarni’s experience shopping with his wife. She was always looking for the best deals, and he thought there would be an app that gathered that data. But when he looked, he couldn’t find one where the data was extensive and reliable.

Today, there are many Zoomingo competitors available, though – for example, Shopular recently raised $6.4 million for a similar application.

Zoomingo, however, is a bit more social experience. To find the deals, the company aggregates sales data from thousands of retailers, including top chains like Macy’s, JC Penney, Target, Nordstrom and others, as well as smaller shops. Some of the deal data is collected through automated means, and other data is gathered manually. But what makes Zoomingo more fun for its users, is that community members can contribute their own deal finds by snapping a photo with their smartphone and sharing it in the app for others.

Nadkarni says that Zoomingo leverages its community in other ways, too. For instance, Zoomingo users rate over 1 million items monthly through the app’s “Hot or Not” game that helps the company identify the best local deals.

Earlier this year, Zoomingo introduced personalization technology to make the app more personal too, with a “News Feed” of ads, sales and top items from the stores and categories you prefer. The Simon Mall partnership will also now allow the app to include exclusive access to deals Simon gathers from the malls’ tenants, Nadkarni notes.

With the new funding, Zoomingo is working to build out its mall offer platform for retailers, which would take advantage of smartphones’ location technology to send out personalized alerts and time-sensitive offers for shoppers. The platform is available now, but will be enhanced in time. Currently, the platform sends out geo-fenced alerts about deals to users’ phones, but in the future, the app will also be able to work with Bluetooth LE devices in the malls which enable indoor mapping and positioning,

“I think there’s a lot of interest in this tech both from mall operators and retailers,” says Nadkarni of Bluetooth LE technology, which Apple is calling “iBeacon. “I think they’ll want to do some tests, which is why our partnership [with Simon Malls] over time will be helpful,” he says.

The retailer platform is also expanding its reach. While the company has so far run just a couple of campaigns for retailers to test geo-targeted deals, discussions with others are now underway.

Zoomingo today has 1.3 million registered users on iOS and Android, and is generally found in the top 10 in the Catalogs section of the iTunes App Store. The company remains a relatively small, ten-person team based in Seattle.