Baseball is the elder statesman of the major sports. With a history that predates the Civil War and a narrative that evokes Americana, folklore and “simpler times” — when it comes to “technology” — it wouldn’t be unreasonable to expect baseball to be a few steps behind. (Or to expect the league and its many tentacles to have a “sepia-tinted perspective,” if you will.)

After all, professional sports as a whole aren’t usually known for being on the cutting edge of technology policy. Baseball itself has swung and missed repeatedly on the innovation front. For examples, one needs to look no further than the league’s sterling adaptation to the latest in performance enhancing technology, or its sluggish approach to instant replay.

Nonetheless, in honor of an October passed, The World Series and the heroic victory of the Boston Baseball Red Sox in this year’s campaign (Journalistic Disclosure: The Yankees stink), let’s consider the other, brighter side, and how things are beginning to change.

The truth is that, since creating MLB Advanced Media (the league’s internet/interactive arm) in 2000, baseball has taken enormous strides forward in becoming more digitally savvy. In fact, one could make the argument that baseball is now the most digitally savvy sports-related vehicle out there, at least where the Web and mobile are concerned.

That being said, with digital savviness comes great responsibility, and for baseball, wielding that power sometimes turns out for the worse, given how the league has traditionally approached digital video — like, say, its approach to content on YouTube.

And sometimes for “the much worse”. Believe it or not, Major League Baseball is the proud owner of a geolocation patent. Yes, you read that correctly, a geolocation patent. But that’s not all. Is that patent for a technology that allows the MLB to better serve you, based on your location — or some other such fan-centric and thoughtful technology?

Nope. It’s to literally block you from watching games, based on your location — and to protect its own interests, of course. If you try to watch a game through MLB.com (in other words, if you try to watch baseball on the Internet), they will pull the shade down over your prying eyeballs to protect deals they have with regional networks.

Thankfully, things are beginning to change. Earlier this year, MLB struck a deal with YouTube to start bringing its highlights and archives of footage going all the way back to 1952 to the video network.

The MLBAM also struck a deal with T-Mobile to drop landline calls from dugouts to bullpens and put them on their 4G network (which is hilarious). More importantly, MLB Advanced Media followed that by inking a deal with Qualcomm to improve fan access to WiFi, 3G and 4G at major league ballparks (and send more digital content their way).

But, the most important thing that baseball got right as part of its young technology initiatives: The MLB.com, MLB.TV and MLB At Bat trifecta. While the NFL continues to be king of your television set, with these doozies, baseball now sets the standard for content on your devices. 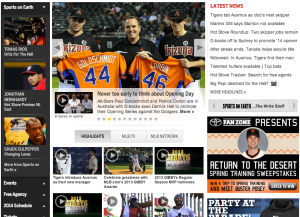 MLBAM oversees MLB.com, the official website of Major League Baseball, which is not only the go-to source for all baseball-centric info, but includes news, stats, columns and provides streaming audio and video of all its games to hungry fans everywhere. Not only that, but the site also provides near-live box scores for each game, sells merchandise and allows fans to buy tickets to games, but MLBAM also oversees and hosts the 30 websites of each individual team.

MLBAM VP of Corporate Communications Matthew Gould tells us that the most recent MLB Postseason, which featured 38 games and was capped by the Red Sox’s World Series Victory, set a number of milestones for the league. During the 2013 postseason, a total of 296.4 million visitors — just shy of 10 million visitors per day — accessed a “record-setting amount of content through MLB.com across “thousands of devices, platforms and screens.”

For those unfamiliar, MLB.tv is a subscription service that lets you stream baseball games live (in HD) on your computer, listen via audio and tap into a whole bunch of other stuff, like stats, highlights and so on. Gould tells us that fans watched 22 percent more live video streams in 2013, including “30 percent that accessed video through smartphones and tablets.

Overall, he tells us, live and on-demand video from MLB.com “drew 152 million streams during the Postseason, a 170 percent increase over last year.”

MLBAM’s MLB At Bat, however, is the third and perhaps most significant part of baseball’s digital triumvirate. The app, for those who haven’t yet caught baseball fever, is available for iOS, Android and BlackBerry and gives fans access to live audio, in-game video highlights, pitch-by-pitch live data.

In fact, At Bat was actually one of the first 500 apps available when Apple first debuted the App Store back in 2008, and has since gone on to be one of the store’s top grossing apps.

As of 2012, however, At Bat is free and anyone can access the features above, but if you pay for a MLB.tv subscription, you can unlock the app’s full functionality — chief of which is the ability to watch games live. I usually discourage people from giving their money to MLB, but if you’re a baseball fan, MLB.tv and At Bat are required. (Just “borrow” your friend’s password if you don’t want to pay $25/month.)

The season is now over, so laying out all the details and features that At Bat made available for the 2013 Postseason is a little pointless, and MacRumors has already done that for us.

But the real milestones that other major sports and mobile developers interested in (or participating in) sports are the facts that, beyond Apple naming At Bat the 10th highest grossing iOS app of all-time, this year the app passed 10 million downloads for the first time.

The league said that it’s the first time At Bat has hit the 10 million mark in a single season, breaking last year’s total of 6.7 million. More significantly, 60 percent of At Bat subscribers opened the app every single day during the 2013 season.

In terms of how this compares to its usage historically, MLBAM said that At Bat had accumulated a total of 1.2 billion “app starts” between its debut in 2008 and 2012, and that total app starts for the 2013 season are already over 1 billion. In other words, not only are a lot more people using the app, but it’s also much less horrible to use, so it was a darn good 2013.

The MLBAM also said that At Bat was the “first media app to stream live video to iPhone in July 2009” and has since “driven more than two billion minutes of live video consumption.” For the postseason, Gould says that the app was opened 76.6 million times — an average of 2.5 million times per day.

Furthermore, downloads of At Bat, across iPhone, iPad, Android, Kindle Fire, BlackBerry 10 and Windows Phone 8, were up 76 percent year-over-year in 2013.

For fans, there really haven’t been a lot of sports-related victories on digital and mobile. Yes, we can now watch our favorite athletes say self-incriminating and hilariously stupid things on Twitter, ESPN has begun to step up its game in multimedia (here and here), Yahoo seems to think its going to own fantasy sports (this says it all) and fantasy sports in general are getting better. But there’s still a long way to go.

That’s why MLB At Bat’s milestone, the app itself and the MLB.com/MLB.tv/At Bat trifecta deserve to be celebrated. It’s a great $%^&-ing start.

Especially when you see baseball working with Apple to to do things like leverage iBeacon, Bluetooth and iOS 7 to create customized, interactive experiences for fans attending games at their local ballparks through MLB At The Ballpark. Yes, it’s potentially a revenue source for baseball, but it could also lead to some cool opportunities and features for fans. 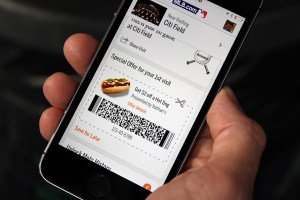 Not to mention that baseball is in the midst of launching a grand experiment with Apple’s iBeacon technology that could do wonders for in-venue positioning and even make its way onto the field. In September, MLB Mobile Product Dev SVP Chad Evans told TechCrunch’s Chris Velazco that baseball is moving to “build a platform for any team toput their own custom Bluetooth beacons in their parks.”

This started with At Bat, as Chris wrote at the time, but will soon be leaking into other MLB products and experiences:

A handsomely revamped version of the MLB At Bat app is perhaps the furthest along. Evans says the design language of the app, which now features a seemingly Googlean stream of cards that display your ticket barcode and seat locations (among other things) is near final and will roll out to consumers in the coming months. The visual polish of the software was balanced by the unfinished nature of the hardware that made all those whiz-bang features possible. At this stage it’s all prototype gear, small boards lashed together and housed in milky-white plastic cases to protect them from the elements.

With MLB’s experiments online, in streaming video and in the emergent world of technologies like iBeacon, it’s also great to see MLB Advanced Media CEO Bob Bowman riff on what the future holds, as he does in the quotation below (excerpted from Fast Company).

With baseball’s history to keep us in check and hedging our bets, there’s a long way to go, but the above examples, combined with Bowman’s quote below, may just be evidence that the league and its media tentacles are learning — and that we can hopefully expect more of the same in the future. And that, my friends, would be a grand slam. (amirite?)

The toughest thing to do in a poker hand and in this business is stand pat. This year we decided to make our At Bat app universal between the iPad and iPhone, which we knew going in would cost us 100,000 subscribers. We threw in At Bat for free with an MLB.TV subscription, which would also cost us revenue. And we added up a monthly At Bat subscription to get people to test the product out. We gave customers more options and a better deal, and we had a record year in paid content. We learned we’re at an inflection point. Customers now understand and appreciate the nuance of content economics. You’ll see more of that value pricing from us going forward.