Over the past few years, Women 2.0 has become one of the most reliable places to find stories from female entrepreneurs, successful and otherwise. It has also, according to co-founder and CEO Shaherose Charania, become a profitable business.

That’s particularly surprising since the Women 2.0 site doesn’t run any advertising. Not that Charania said she’s completely opposed to the idea (“Maybe we will [run ads] eventually, but it will be thoughtful”). However, she sounded more excited about the company’s conferences, and about the different membership plans that it’s experimenting with, where readers pay a monthly or annual fee (currently the lower-priced plan costs $20 a month) for access to a combination of online and offline features, such as conference discounts and virtual happy hours.

To explain the broader vision, Charania compared Women 2.0 to Vogue. In the same way that Vogue is read by women who are never going to be models or wear all the expensive clothes featured in the magazine, she said many Women 2.0 readers may never start a company, but her goal is to turn entrepreneurship into “something aspirational.”

How successful is Women 2.0 at the goal? Well, that’s tough to quantify, but Charania did share the results of a recent survey of the site’s readers, which suggests that it is reaching a global audience (though it doesn’t reveal the size of that audience) — San Francisco and Silicon Valley account for only a combined 30 percent of its readership. And 60 percent of the readers self-identify as entrepreneurs.

One important aspect to the site’s model, Charania said, is the fact that it lets female entrepreneurs tell their own stories — more than 400 female founders and investors have contributed. At the same time, the Women 2.0 team has grown to seven people, as well.

As for the conferences, Charania said the company has settled into a pattern of two bigger events a year, one in San Francisco (which apparently attracts more than 1,500 attendees) and another that travels. The next traveling event, the “Las Vegas Edition” of Women 2.0, is coming up on November 14, with Zappos CEO (and Las Vegas tech proponent) Tony Hsieh just announced as a speaker.

With her nutrition startup HealthyOut, Wendy Nguyen was a finalist in the pitch competition at this year’s San Francisco conference, but she said she was an attendee of Women 2.0 events long before that — for example, she met her eventual investor Dave McClure at Women 2.0’s New York conference last year. And hey, after being onstage at Women 2.0, Nguyen raised $1.2 million in funding.

“Anyone who tells you that they got funded because they were in a pitch competition, that’s just silliness — we all know that,” Nguyen said. At the same time, she credited the event for helping her with making important connections, and she described it as “a culmination of doing the right things.”

HealthyOut was also onstage at our Disrupt NY conference. The difference between the two events, Nguyen said, is that “there’s more of a community aspect at Women 2.0 … They do a great job of promoting female founders.” 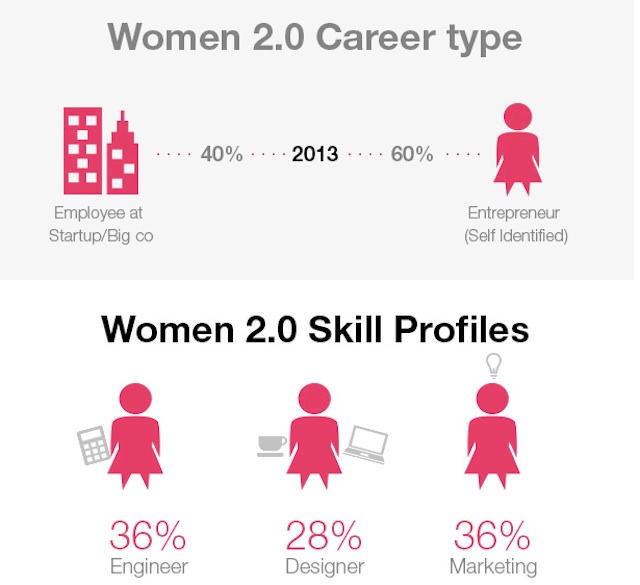 Oh, and if you’re curious about the finalists at the upcoming conferences, here they are (with descriptions provided by Women 2.0).

DailyDollar — DailyDollar is a Cloud-based receipting and personalized offer solution.

College Appz — CollegeAppz is a “TurboTax for College Admissions,” a college readiness platform built to maximize user data for better school matches for students and improved leads for universities and commercial companies.

Traveling Spoon — Traveling Spoon is an online marketplace that connects travelers with vetted, local and authentic food experiences — from homemade meals to cooking classes — in people’s homes around the world.

WeeSpring — weeSpring helps parents collect advice from their friends about what they need for their family, from strollers and sippy cups to apps and — ultimately — appliances.

Abbeypost — AbbeyPost is Etsy for Plus Size…with a proprietary tech twist, connecting the underserved Plus Size shopper directly with indie designers, boutiques and brands.

CareBooker — CareBooker is the “OpenTable” for booking family care services, such as babysitting, pet care, tutoring & lessons, and more.

CareLulu — CareLuLu is the easiest way for parents to find a daycare or preschool that fits their family’s needs through an online marketplace that offers a personalized search, verified parent reviews, photos, and even tuition rates.

Reorient Media — Infinite PDF is the latest flagship product of the Infinite Canvas Suite, published by ReOrient Media. Infinite PDF allows you to expand your existing presentations to add dimensionality, transitions and interactivity.

Totspot — Totspot is a mobile marketplace for savvy moms to discover, buy and sell new and like-new kids items such as toys, clothes, baby gear and books.